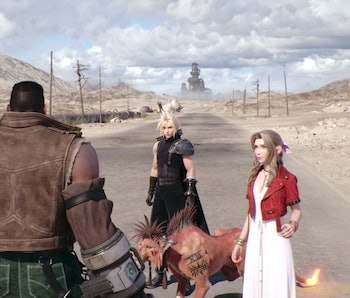 Final Fantasy VII Remake was one of 2020’s best games, but the ongoing remake series of Square Enix’s seminal 1997 classic is just getting started. The first entry is set in the smoggy metropolis of Midgar where it stinks of Mako, expanding the first several hours of the original game into an epic 40-hour adventure. What’s next for this budding sub-franchise? When will the next entry be released? How might the epic tale evolve in its next-gen reiteration? And how did FF7 Remake: Intergrade and Yuffie’s new story change things? Here are answers to all that and more.

When is the FF7 Remake Part 2 release date?

FF7 Remake Part 2 won’t be released until 2022 or later, but Square Enix has yet to offer any official updates on the matter beyond vague promises that development is proceeding smoothly.

The first game’s director Tetsuya Nomura confirmed via a blog post that development was in full swing by November 2019. Square Enix President Yosuke Matsuda confirmed in February 2020 the slight delay of the release of FF7 Remake would not impact the timeline for the next installment. The team confirmed development was ongoing again in July 2020.

Producer Yoshinori Kitase Kitase told Famitsu (via Comicbook.com) in December 2020 that "development for [FF7 Remake Part 2] is progressing smoothly” but asked that fans “please wait a bit longer for more details." Given the unprecedented scope of the project, it's hard to make predictions ... especially when many of Square Enix’s biggest projects take years to develop. Both Final Fantasy XV and Kingdom Hearts III were in development for about a decade.

In the meantime, spinoff projects like the two-chapter inter-quel FF7 Remake: Intergrade offer more content within the FF7 world.

Nomura noted a deeper meaning to the Intergrade title in a February 2021 Famitsu interview: “‘Intergrade’ also carries the meaning of ‘intermediate,’ referring to the period between FF7 Remake and the next game, and of ‘transition,’ which refers to ‘moving on to the next hardware generation’ and ‘moving on to the next game,’” he said. But in the same breath, he said that he “would be delighted to see fans lose themselves in these three games set in the FF7 world in the meantime while we all wait for the next FF7 Remake.” Here, the “three games” are Intergrade, FF7: The First Soldier, and FF7: Ever Crisis.

Intergrade was released in June 2021, the mobile battle royale The First Soldier is due out before the end of 2021, and the mobile retelling of the entire FF7 saga — called Ever Crisis — will be released in monthly chapters throughout 2022. It would make sense for the next main Remake entry to be released after all of that, so we’re probably looking at a late 2022 or early 2023 release date for FF7 Remake Part 2.

What is the FF7 Remake Part 2 story?

Spoilers follow for the original Final Fantasy VII, so skip this section if you don’t want to know more.

FF7 Remake's credits roll when the party leaves Midgar. In the original title, this is when Final Fantasy VII transitions to an open-world, globe-trotting adventure. Cloud and his friends travel across plans and through mountains, pick up some new party members, and fight to save the planet from Shinra and Sephiroth. The most likely possibility is that the second part of FF7 Remake will end where the original's first disc concludes: the Forgotten City.

Sephiroth’s plan is to use the Black Materia to summon Meteor, a magic spell capable of destroying life on the planet. The planet’s Lifestream however, would theoretically try to protect the planet and/or heal the wound. When that happens, Sephiroth hopes to absorb the Lifestream and become a god.

Right after Midgar, the party goes to Kalm (which was hinted at in the Intergrade post-credits scene) where Cloud tells a story about his past we later learn is muddled, to say the least. Then they visit locations like Junon, Gold Saucer, and Cosmo Canyon while hunting down the Black Materia. Disc 1 culminates with Sephiroth getting the Black Materia and then murdering Aerith at the Forgotten City while she’s praying to cast Holy magic to counteract Meteor.

However, we can't expect the sequel to mirror FF7's original story exactly.

FF7 Remake Part 1 and Intergrade expand upon the original a great deal, introducing new characters and enhancing the roles of minor supporting figures by incorporating elements from spin-off games like Dirge of Cerberus. There are also plenty of brand-new characters and details. Expect future entries to pull heavily from the animated movie Advent Children and other spin-off games like Crisis Core, particularly after Part 1 grappled heavily with these characters defying "Destiny." Not only is Zack alive (either in the main timeline or a parallel one) based on the FF7 Remake ending, but it’s plausible that Aerith avoids her grim fate.

In a July 2020 interview, Kitase suggested there will be narrative upheavals ahead: "I’m sure there are people who wish to experience the exact same story and relive memories," he said. "However, if we were to do that, then all we would be doing is just adding to the original experience, which would cause the Remake to lose its significance." Wedge and Biggs — and maybe even Jessie — are still alive, so that’s already a major deviation from canon.

While it's not yet clear how Remake's changes to Sephiroth, Avalanche, and Shinra will shape the story going forward, we do know that everyone's favorite new character, Roche (the SOLDIER who’s obsessed with his motorcycle), is almost certainly going to return for the sequel.

Will FF7 Remake Part 2 have any new features?

Judging from the original saga, players will gain access to a host of new vehicles as Cloud's journey unfolds. Players will almost definitely get Chocobos, the ridable avians that appear in every Final Fantasy game. There's also a Buggy car that players will drive around in, along with the Tiny Bronco airplane that can only fly in shallow water, effectively functioning as a boat. At one point, the player gets full control over an airship, but that probably won't happen until later entries in the Remake series.

Final Fantasy VII Remake changed up the original's combat in significant ways, placing a greater emphasis on combo-driven action and giving all four playable characters — Cloud, Barret, Tifa, and Aerith — their own unique fighting styles. Since the next installments will likely bring new fighters onto the squad, we can expect to see new combat designs for characters like Red XIII, along with a host of familiar faces that Cloud and friends haven't yet crossed paths with.

According to co-director Hamaguchi Naoki, the optional Classic Mode of turn-based combat will also be altered in future installments to make it more enjoyable for players that want a greater strategic challenge.

It’s also highly possible that a new feature from Intergrade will make its way into future games.: “As a new feature, Yuffie can co-ordinate with Sonon to perform team combos,” Nomura told Famitsu in February 2021. “I think it will let fans enjoy a slightly different take on battles to in the main game.” This extra level of complexity in the combat should be exciting in Intergrade and beyond.

Who are the FF7 Remake Part 2 party members?

If this covers the story portions we're currently expecting, you should meet all of the original party members by the end of FF7 Remake Part 2. Red XII, who only appears as a "guest character" in FF7 Remake, should join your party right at the beginning of the second entry as a full member.

Yuffie stars in a two-chapter sequence included in the PS5 Intergrade upgrade, and based on that game’s ending, it seems likely that she’ll meet up with the rest of the party very early in Part 2. Beyond that, players should encounter remaining party members Cait Sith, Vincent Valentine, and Cid Highwind in rapid succession. Hopefully, that doesn’t mean development will take longer on account of developing each character’s unique battle style.

In the original, in most circumstances the player could choose which party members they wanted. But for much of FF7 Remake, the party is split for organic storytelling reasons and streamlined a bit. It’s possible that the sequel might similarly split the party up — or perhaps it’ll return to the classic format, allowing you to choose who accompanies Cloud.

It’s also possible that Part 2 could end before we meet Vincent or Cid, leaving them for Part 3. Red-XIII and Yuffie will definitely appear, and Cait Sith is also extremely likely given his cameo in the first entry. Depending on how things unfold with Zack, it’s possible he even joins the party at some point. In fact, that could be a fascinating way to break up the party: Have Cloud and Zack lead two separate parties to cover much of the same story from the original.

Will there be a FF7 Remake Part 3?

Almost certainly. The original Final Fantasy VII was released on three discs. The FF7 Remake Part 1 ends when the gang leaves Midgar, which occurs less than halfway through Disc 1. Part 2 will likely close out Disc 1’s narrative content, which leaves the many story events of Disc 2. The final disc of the PS1 original is mostly limited to optional endgame exploration and cinematic cutscenes.

Nomura believes that subsequent parts might vary in size. Producer Yoshinori Kitase knows that many suspect the story to be told over three parts, but debunked that notion in Final Fantasy VII Remake Ultimania, where he said there's no firm grasp on the series' endpoint.

In July 2020, Nomura expressed confidence that they might be able to determine the final sum of parts once the next installment is released. In the Ultimania book, released in April 2020, Nomura said he wants future parts out "ASAP," and is considering altering the size of future installments based on what the covered story section requires. Some releases might be smaller, perhaps similar in size to an FFXV DLC. Other additions could be heftier, clocking in closer to the 35-40 hour playtime of FFVII Remake Part 1.

For now, a Remake trilogy still seems to be the likeliest outcome, but if the series continues to be successful and the story demands it, it's possible the series could swell to a fourth installment.

How does FF7 Remake connect to the Compilation of Final Fantasy VII?

In Ultimania, Nomura officially labeled the FFVII Remake series as the fifth part in the Compilation of Final Fantasy VII. The remake included Compilation characters Kyrie Canaan and Leslie Kyle from the light novel The Kids Are Alright, penned by Kazushige Nojima, one of the game's writers.

There are more subtleties to The Compilation scattered throughout the game. The Shinra Test Site that you explored was called a Deepground, a label introduced in the Dirge of Cerberus spinoff game focused on Vincent Valentine.

The triad of Whispers fought in Chapter 18 (Rubrum, Virdi, and Croceo) are implied by the Ultimania guide to be Kadaj, Loz, and Yazoo from Advent Children. In the film, which takes place after the original Final Fantasy VII, they're remnants of Sephiroth's will, effectively his children. This is reinforced by Whisper Croceo's special attack "Velvet Nightmare," which shares its name with Yazoo's gun from the film.

When scaling Shinra HQ, you run into a man from Cloud's past, who tells the blond "Ex-SOLDIER" that he's going to get Kunsel. If you've played the PSP prequel, Crisis Core, you'll recognize Kunsel as Zack Fair's commanding officer.

Nojima and Nomura designed FF7 Remake to be representative of the entire Compilation of Final Fantasy VII, not just the original game. It's the culmination of everything the series has come to mean.

In FF7 Remake's closing scenes, Zack Fair is revealed to have survived his previously fatal attack. FF7 Remake Ultimania implies that this Zack is one from an alternate timeline, using the alternate representation of Stamp the dog as proof. Zack's profile in the book refers to him in both present and past tense, further confusing the situation.