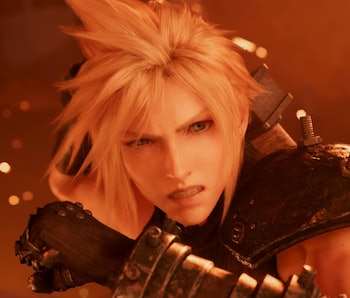 Final Fantasy VII Remake delivers a gorgeous reimagining of the beloved 1997 classic, but it only encompasses the first portion of the game’s full story, leaving fans to wonder when the FF7 Remake Part 2 could be released. Now, thanks to Epic Games’ Wednesday announcement of the Unreal Engine 5, we may have a better idea of when the next installment will be released — and how important Unreal Engine 5 will be when it comes to building the game's open world.

A now-deleted alleged leak posted on Reddit in April claimed that Square Enix had pushed the FF7 Remake Part 2 release date window back to early 2023 due to a change in workflow because of the coronavirus pandemic. This unverified information was quickly dismissed by Redditors because it also mentioned that game would be built on Unreal Engine 5, which wasn't announced until May 13. Given the new information, it seems all but confirmed that Square Enix will use Unreal Engine 5 to create FF7 Remake Part 2.

The question then becomes: Does Square Enix have to wait until Unreal Engine 5 is made available to developers in early 2021 before it begins work on FF7 Remake in earnest? If yes, that could lead to greater delays — or maybe not.

Square Enix has used Unreal Engine for a plethora of games in the past. Final Fantasy VII Remake, Dragon Quest XI, and Kingdom Hearts III were all built using Unreal Engine 4. There’s no reason to believe that the company would suddenly switch game engines, which would probably alter the final look and feel of FF7 Remake Part 2. Instead, migrating FF7 Remake assets to Unreal Engine 5 would be a natural upgrade for the company, and the new engine will probably make doing so easy.

“It’s a real generational leap in new features," Epic Games CEO Tim Sweeney told GamesBeat. "Even though it doesn’t break things that came previously, Unreal Engine 5 will be a straightforward upgrade for anyone working with Unreal Engine 4. It’ll be like going through a few minor version updates.”

Epic Games showcased the crisp level of detail and stunning lighting its new engine is capable of. Since the FF7 Remake Part 2 is guaranteed to release on the PlayStation 5, using the Unreal Engine 5 would be the best way for Square Enix to make the most of Sony’s potent new hardware with software its developers are already well-versed in.

In fact, Square Enix has already begun development on FF7 Remake Part 2. Game producer Yoshinori Kitase confirmed in a June 2019 interview with GameSpot that planning had already begun on the second part, and Director Tetsuya Nomura confirmed via a blog post that development was in full swing by November 2019.

It’s unclear if Epic Games gave Square Enix early access to Unreal Engine 5 in any fashion, but even if a lot of work on FF7 Remake Part 2 has already been done without the new engine, transitioning to it should be easy.

The Inverse Analysis — Epic Games highlighted that one of the main benefits of Unreal Engine 5 is how it allows developers to easily import their 3D models into the engine from other software without any extra steps. And because of dynamic new features that come with Unreal Engine 5, it'll make next-gen open-world gaming environments a possibilities. FF7 Remake ends right when players leave the city of Midgar, and it's at this point in the original game that players begin to explore open-world environments. For Part 2, working within Unreal Engine 5 seems like a no-brainer.

When asked about how Lumen — a real-time dynamic global illumination software that comes with Unreal Engine 5 — will make open-world environments easier to manage from a development standpoint.

"This enables a much wider variety of games to have realistic responses to light, everything from large-scale open-world types of games with day/night cycles to seamless transitions from indoor to outdoor," Tim Sweeney said during the May 13 presentation. The implication of this "freeing technology" is that open-world games will become much easier to create thanks to Unreal Engine 5.

If the aforementioned Reddit leak is accurate, then the FF7 Remake Part 2 shouldn’t face additional delays because of a shift in industry-standard technology. While the effects of Covid-19 might have been a bump in the road for Square Enix’s sequel, it’s still on track to be even more breathtaking than the first portion of the FF7 story, and Unreal Engine 5 came along at just the right time to make it happen.