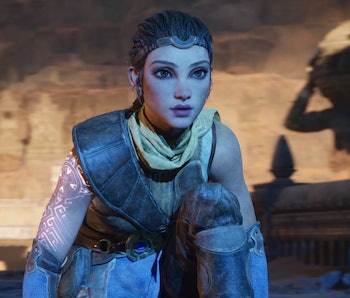 The latest Summer Game Fest announcement on May 13 will have major ramifications in the gaming industry for years to come, because Epic Games revealed Unreal Engine 5 with a jaw-dropping demo running on PlayStation 5 hardware. The visually stunning demo makes it clear that in the future of next-gen gaming, engines like Unreal Engine 5 will be just as vital, if not more so, than next-gen hardware like the PlayStation 5 and Xbox Series X.

On Wednesday, Epic Games revealed the special enhancements that the next iteration of Unreal Engine will bring when it is released sometime in 2021. This includes features like "nanite virtualized micro-polygon geometry, which frees artists to create as much geometric detail as the eye can see, and Lumen, a fully dynamic global illumination solution that immediately reacts to scene and light changes," according to an official description of the engine reveal video by Epic Games.

Epic showed off features like this in a tech demo called Lumen in the Land of Nanite that utilizes all of these enhancements during gameplay on PS5 hardware. Thus far, the footage shown from next-gen hardware hasn't really been all that impressive, which makes it seem like developers really need more advanced game engines like Unreal Engine 5 to showcase the power of the PS5 and Xbox Series X.

"Remember that this is not just a graphics engine," Tim Sweeny explained in a Summer Game Fest Unreal Engine 5 interview with Geoff Keighley. "It's a full simulation engine that aims to power every aspect of simulating a realistic environment, including very detailed physics, vehicles, collision, destruction, and everything else."

With Unreal Engine 5, Epic Games will bring gaming graphics to a place that's on par with what we're seeing from special effects in films right now. Another video highlighting the Lumen in the Land of Nanite tech demo highlights how assets are now "film quality" and made with "billions of triangles" which isn't possible on current-gen hardware.

The video also highlights how other technical setbacks, like polygon budgets and normal mapping, will no longer be needed with Unreal Engine 5. It will also be widely accessible to just about any developers upon its release next year, with Epic Games' CTO Kim Liberi telling IGN that the process is as simple as buying and placing high-quality assets in the engine. "It's actually massively lowering the barrier of entry of how complex it is to make a game level," they said.

Still, some people are skeptical about the true steps Unreal Engine 5 and next-gen consoles will bring.

"Cost/reward for leaning into bleeding-edge just isn't there," NPD Analyst Mat Piscatella explained on Twitter. "The tech demos are amazing, but they're purely aspirational designed to get folks interested and to buy based on possibilities rather than realities of what will actually get made due to development costs."

It's also worth noting that Unreal Engine 5 won't be fully rolled out until the end of 2021, so it will be a couple of years before what the engine is truly capable of is commonplace.

The Inverse Analysis — While next-gen consoles well deliver the processing power needed to handle some impressive games, development tools like Unreal Engine 5 could ultimately prove more vital when it comes to showcasing the more impressive possibilities of what next-gen games will look and feel like. As such, this is a very important reveal for the industry and another solid announcement for Summer Game Fest following up on the May 12 Tony Hawk's Pro Skater 1+2 reveal.

Games like Assassin's Creed Valhalla that aim for a release on current- and next-gen consoles will ultimately seem a bit disappointing if they do run at 30 FPS on next-gen consoles, but by 2022 and the years that follow, we'll be seeing some truly amazing stuff on the PS5 and Xbox Series X powered by Unreal Engine 5.

Unreal Engine 5 will be available for developers in 2021.