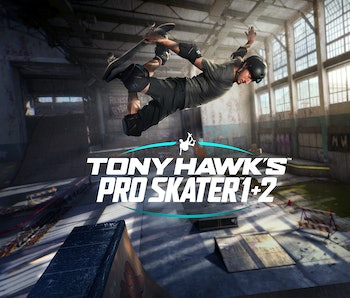 The first major Summer Game Fest announcement hosted by Geoff Keighley on Tuesday confirmed that a remastered bundle of Tony Hawk's Pro Skater 1 and 2 is coming to PC, PS4, and Xbox One later this year — and it has fans clamoring for more skateboarding games like Skate 4.

Not only does this mark the glorious return of a hugely popular and long-dormant series, but it also indicates that Keighley's Summer Game Fest will involve more exciting reveals in the coming months. If this is just the beginning, then we're excited to see what comes next.

Tony Hawk's Pro Skater 1 and 2 is a remake of the classic skateboarding games, and the bundle will feature all the classic modes, parks, and other features from the first two games with modern coat of paint. It's in good hands too, as it's being developed by Vicarious Visions, the same company that recreated classic games in the Crash Bandicoot N. Sane Trilogy.

Tony Hawk's Pro Skater 1 and 2 will be released for $39.99 on September 4 for PC, PS4, and Xbox One. On PC, it will be an Epic Games Store exclusive. Those who pre-order will gain early access to the Warehouse demo later this summer.

The right team is working on the remake — Vicarious Visions is a great choice to develop this remaster. The creators of the original games, Neversoft, have since shut down, but Vicarious Visions has experience on not with different remasters but on handheld versions of older Tony Hawk games as well.

"It's obvious that they are fans of the game so when I started playing it, it felt like the same response ... yet the visuals were way over the top," Tony Hawk himself said in a post-reveal interview with Keighley published by the Summer Game Fest YouTube channel. Vicarious Visions has focused on recreating the originals as they were, but some helpful features like "Revert" from later Tony Hawk games — allowing for more fluid trick combos — and additional challenges are being added to make it a smoother experience.

"The number one thing for us was to get it to feel right," Vicarious Visions' Jen Oneal said in the same interview. "It's got to be a high-quality game that feels like you remember it."

All classic modes are returning, including Multiplayer, Create a Park, and Create a Skater. These features all come with some cool improvements, like being able to play and share online.

Why was it remade? "There's been a lot of requests over the past few years," Hawk said. "I could just sense it ramping up, especially as we approached the 20th anniversary of the release of the first THPS and I was talking to Activision ... and the idea was 'Why don't we remaster this?'" Ongoing fan demand made it clear to both Tony Hawk and Activision that this was a project that needed to happen.

"1 and 2 is the jumping-off point," Hawk said, implying that this is just the beginning. "I would love to be able to do more down the line. I think that we can make this stuff look spectacular." If the fan response is any indication, that will end up happening. The replies to the announcement are filled with positivity, with some fans even going as far as to demand that EA now revive the Skate series with Skate 4 as well.

The Inverse Analysis — Given the popularity of the skateboarding series, the Tony Hawk's Pro Skater 1 and 2 remaster is an excellent reveal for Geoff Keighley to kick off Summer Game Fest with. It's a remake of a highly beloved game and will hopefully get a series that lost its way back on track, and it's potent enough that anyone who may have been skeptical of Summer Game Fest as a concept can now expect more exciting announcements just like this.

Vicarious Visions is a nice match for the project too, and the early look we've gotten at the game seems promising for long-time fans and newcomers alike. If Geoff Keighley can keep up this level of momentum, then we'll have a lot to look forward to with the rest of his Summer Game Fest in the coming months.