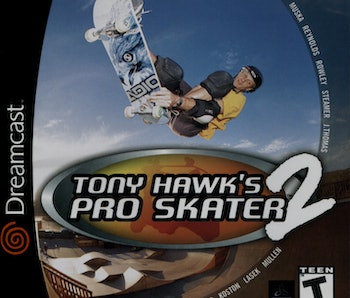 It’s a skating game. End of story. Like its predecessor, there are no story modes or complicated seasons where you need to curry favor of sponsors or please fans. The core game mode, “Career Mode,” is a string of levels with a high score to beat with two minutes to do it in. The challenge to beat the score, the most classic goals of all video games since Asteroid, thrives in Tony Hawk’s Pro Skater 2.

Every other play mode is a variation of “Skate for two minutes and see how many tricks you can nail. Go nuts.” It’s a playtime liberation that speaks to its aimed demo, youth, who had nothing but time after school. It’s such an innocent challenge of indulgence: How much can you do?

The features that Pro Skater 2 adds upon what Pro Skater lacked are breathtakingly deep. Three more skaters join the official roster, but Create-a-Skater allows you to craft five more of your own boardsmen. While even modern sports games have created players lack the fine details that make them stick out like oddballs against the roster, Pro Skater 2’s custom skaters look natural alongside Chad Muska, Eric Koston, and even Tony Hawk himself. Although not quite deep, this feature was total fantasy fulfillment for suburban kids everywhere who wished to skate with Tony Hawk and Bob Burnquist.

The Park Creator was arguably the best feature remembered from the series and its debut earned Pro Skater 2 the critical acclaim it enjoys today. Its premise is simple: you create your own skatepark. But where it shines is in its depth. You can dictate the size of the square footage and the wide array of ramps, rails, ledges, in-ground pools, and billboards can be placed however you wish. If Pro Skater 2 was released just a few years later and became apart of online play and content sharing, perhaps the lifespan of Pro Skater 2 would be lasting even today.

The Pro Skater series is marked with a restrained, sophomoric humor that gave it a personality unlike other sports games, and Neversoft wisely never bothered with realism. It’s not gross potty humor, but it’s snarky. Most pro sports games tout realistic physics and graphics, but Neversoft — perhaps to channel skating’s punk roots — diverted from that tradition. In addition to the playable roster of actual pro skaters, you can play as a fat cop named Officer Dick, a hipster raver named Trixie, and Spider-Man. Yes, Spider-Man. His iconic symbiote suit is an alternate costume.

Multiplayer was a fun distraction. Although capable of only two players, they can engage in game play modes that allowed you to earn your smack talk: Horse, which is played exactly like horse on a basketball court except with points (“HORSE” could be spelled into anything, and in the hands of juveniles that means anything), Tag, and whoever is “it” has until the time runs out to tag the other player, Trick Attack, a basic challenge for the highest score, and Graffiti, where players had to nail more tricks over certain areas.

While it isn’t a cartoon, Pro Skater’s goofy humor allows you to forgive the impossible physics. You can mess up on the vertical ramp and fall right onto the ground, and you’ll suffer nothing but lost points and some blood on the plywood. And it’s totally fine, because there is a bull running around in the Mexico level.

Speaking of that level, it has a “Loop of Death” and it’s totally fun and easy to skate through in the game. But just to illustrate the impossibility that exists in Pro Skater 2, check out real, professional skaters trying out that exact ramp and almost break their necks.

But while Tony Hawk’s Pro Skater 2 skirts the line between realism and goofy impossibility, it maintains the true essence of skating down to a T: The player, like a real skater, will challenge themselves to string together a unique combination of tricks to land the score necessary to continue on. By trial and error the gamer can formulate the best course of action. Trick off this ramp, grind onto that rail, manual to the next ramp, and pray it lands.

The soundtrack: INCREDIBLE. Fans who reminisce on the series will almost always fondly remember its soundtrack. Pro Skater 2 made “Here and Now” by Ernies and “Guerilla Radio” by Rage Against the Machine permanent fixtures on the iPods of ‘90s kids growing into adolescence. Harmonix’s Rock Band would introduce kids to classic rock just a short few years later, but Tony Hawk’s Pro Skater gave them Suicidal Tendencies.

In 2015, Tony Hawk walked on stage of Sony’s CES conference to announce Tony Hawk’s Pro Skater 5 was in development. The Pro Skater series was changed in 2004 with the introduction of Tony Hawk’s Underground, which was a transitional title for the series that was familiar to play but carried a new, unlikeable attitude. As time went on and more games were introduced, gone the simplicity disappeared as it chased after “prestige gaming”: open world exploration, motion control, and all sorts of nonsense that distorted what was loved into something else entirely. There is excitement and hope that Pro Skater 5 will be a true return to form that honors its ancestors’ legacy, even though it’s supposed to include projectiles for some reason.

Skateboarding was once a punk symbol. But as punk died and co-opted into the capitalist machine, skateboarding managed to become its own entity, showing up on ESPN and making names like Tony Hawk into their Michael Jordan.

Punk died, but at least we got some great games out of it.