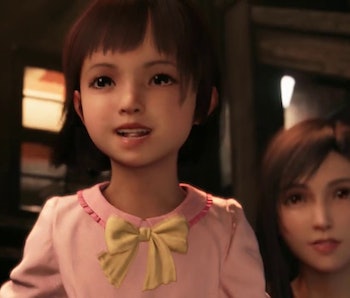 The first Final Fantasy VII Remake has already made plenty of changes to the source material, but one fan theory posits that Marlene, Barret's adopted daughter, may end up having a bigger role to play in Part 2. There were hints from the original that she was more than meets the eye, and the Remake games may be leaning even further into the theory that Marlene might be a secret Ancient.

Redditor Aliasis posted to Reddit a theory about a week after the game's release, and it makes the argument based on evidence from FF7 Remake and even a bit from the original FF7 that like Aerith, Marlene is a Cetra.

"I've thought Marlene could be an Ancient since the original game, long before there were any FFVII spinoffs," they explain. "It seems that any time Marlene is portrayed, her connection to Aerith is always emphasized, and there are hints that she has some kind of Cetra-like abilities."

Who is Marlene? "Marlene is Barret's adoptive daughter, but biologically the child of his friends Dyne and Eleanor," the redditor explains. "Eleanor died during Shinra attacks, which caused Dyne to go crazy." Barret adopted Marlene to honor his friend, whom he thought died years prior, but in the original game, you find out that Dyne survived to become the leader of Corel Town prison with his own gun arm. (In theory, these events should play out in FF7 Remake Part 2.)

"What's interesting is that in the Corel Town sequence, Dyne actually claims he hears Eleanor speaking with him," Aliasis writes. "Perhaps Dyne's just crazy, but what if he does actually hear Eleanor calling out to him? This ability to communicate with those in the Lifestream could imply that Eleanor is a Cetra (or perhaps even Dyne.)" Aerith's mother Ifalna is widely regarded as the last living pureblood Cetra, but either Dyne or Eleanor could have also been Ancients. They may even have been directly related to Ifalna. That might make Aerith and Marlene first cousins by blood, which could explain their curious connection in the original and in the remake.

What clues point to Marlene being an Ancient? While her potential parentage is a major clue, there were also other hints in both Final Fantasy VII: Advent Children and FF7 Remake. "Marlene consistently shares a special kinship with Aerith, despite only meeting Aerith one time," the theorist writes. You might even liken it to the surprising connection between Leia Organa and Rey in the Star Wars sequel trilogy, a kind of unexplained magical resonance that doesn't make sense until it's explained at the very end of the saga.

"Not only is she especially interested in Aerith, initiating talking to Cloud about her, but in Advent Children, Marlene is even wearing Aerith's pink bow," they write. "Marlene also, during the events of the game, becomes Eleanor's new foster daughter, similar to Aerith." This happens both in the original and in FF7 Remake already.

This theory also brings attention to two key new moments in FF7 Remake that provide the most compelling evidence yet: "Marlene and Aerith seem to share a moment and Aerith puts her finger to her lips, as though telling her not to reveal some kind of secret."

Did Aerith use some of her Cetra powers to calm Marlene in this dramatic moment? Or was that strange reaction indicative of their connection? There's also a scene in the train graveyard where Tifa sees a ghostly vision of Marlene crying, so is that the living Marlene projecting some kind of astral form?

Another moment to pay attention to is "in the Remake's ending" when "we actually see what looks like Marlene communicating with the flowers!" Marlene seemingly receives Barret's goodbye message through a vase of flowers. For lack of a better way to put it, she's Force-sensitive and can seemingly communicate through the Lifestream in the same way that Aerith can. Before Cloud, Barret, and Tifa leave Aerith's house to go on their rescue mission, they all agree that Aerith is calling out to them.

It seems at least possible that Aerith is somewhat relaying Aerith's message through the Lifestream, but it's also possible that Marlene herself can simply hear it because she herself is an ancient. The strongest evidence of all, perhaps, are hints from the original that Marlene might be special in some way.

"It's Marlene who, looking out the window, senses 'the flower girl's presence just as Aerith is summoning the Lifestream to stop Meteor — which seems to demonstrate some special power of Marlene's," the theorist writes.

The Inverse Analysis — While this theory hadn't crossed my mind until today, it's actually very plausible. FF7 Remake made some clear diversions from the source material, so it's very possible that the developers could further lean into this theory for the subsequent entries.

Aerith being one of the last known Ancients is a crucial plot point in Final Fantasy VII, so revealing that Marlene is one as well could have major ramifications on the bigger picture. The controversial FF7 Remake ending does essentially mean that Fate itself has been destroyed, so theoretically anything is possible.