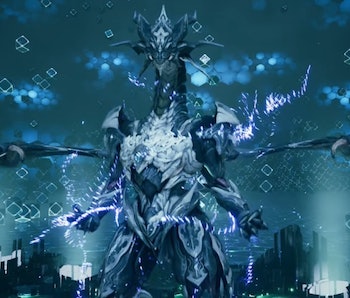 Chadley’s VR Summons are some of the toughest challenges in Final Fantasy VII Remake, and the most fearsome of all is Bahamut. This franchise staple can dole out one-shot kills against even maxed-out characters. How do you defeat a foe that can wipe your party in a single attack? We'll walk you through each step of accessing the fight, and the materia loadout and strategies you'll need to take the big bad dragon down.

How to unlock the Bahamut fight in FF7 Remake

How do you prepare for the Bahamut fight?

Bahamut is unlike any other bosses you’ve faced thus far, and we recommend that you not attempt the fight until everyone in your party has hit the level cap of 50 and surpassed 7500 HP.

Materia-wise, don't give too much focus to magic-based attacks. Designate a party mage: either Aerith or Barret. Give this character Magnify+Healing, a maxed-out attack spell of any element, and Raise. Unlike your previous VR summon fights, Bahamut doesn't have a specific elemental weakness, so any attack spell will do. Fill your mage’s remaining Materia slots with stat boosters like MP Up, Magic Up, and HP Up.

Your other two party members should be Tifa and Cloud, acting as your main attackers. Give them both Healing Materia, a maxed-out attack spell, and Steadfast Block. As with your mage, fill their empty slots with stat boosters. Don’t waste any slots on Elemental or Barrier Materia. Bahamut has many powerful attacks that will render both useless almost immediately.

We don't recommend using Barret’s tank abilities to muscle your way through. Yes, Barret can survive Bahamut’s most powerful attack, Mega Flare, by using Manawall and Steelskin simultaneously. However, that will knock your other party members out, placing you in a rather precarious position. You can use either Raise or Phoenix Down to revive them, but that will probably take more time than the nasty dragon's going to give you.

With everything ready, you now you can fight Bahamut.

But first: Tell us what you think Mako smells like, right here.

How to beat Bahamut in FF7 Remake

Keep your mage far away from the combat while Tifa and Cloud switch off attacking and using abilities to deal damage.

In practice, the flow of combat should look something like this: You’re attacking Bahamut, they begin a counterattack, the character you’re playing as activates block, and you alternate to your other attacker. Bahamut should be distracted by the original attacker, giving you space to move in. Due to Steadfast Block, this will also give the defending character some extra ATB charge. Use that ATB charge to build up Bahamut’s stagger bar. Keep attacking Bahamut with Cloud’s Focused Thrust and Tifa’s True Strike. In conjunction, the two should fill up the stagger bar rather quickly. Try not to use any Limit Breaks yet, even if you have them available.

When healing is needed, switch to your mage. This strategy should get you through 90 percent of Bahamut’s moveset.

Bahamut will have a damaging aura around them, dealing up to 140 HP every second. Don’t be deterred by this. Bahamut’s aura will never disappear and will only grow stronger as the fight proceeds, so you need to fight through it to defeat them.

While most of Bahamut’s attacks are tough but manageable, you need to watch out for Umbral Strike and Mega Flare. Umbral Strike will occur when Bahamut hurls two homing orbs at you. These orbs cannot be blocked and are nearly impossible to dodge. Make sure your mage has the MP to heal any victims of Umbral Strike immediately afterward.

Bahamut displays a countdown before unleashing Mega Flare. If the countdown reaches zero, he'll unleash an attack dealing 9999 damage, instantly wiping your party. As Bahamut prepares Mega Flare, he'll become stationary, giving you time to stagger. This is the time to use up those Limit Breaks.

Alternatively, you can switch to your mage and use a top-level attack spell to interrupt Bahamut, stopping Mega Flare. If you’re using Aerith, place an Arcane Ward somewhere on the map early in the battle. The Arcane Ward will grant Aerith two top-level spell uses for the MP cost of one. It won’t be as visually appealing as a Limit Break, but it works in stopping Bahamut in his tracks.

Although Bahamut’s attacks will grow more damaging as the fight drags on, they won’t learn new moves, so this strategy works for the entire brawl. If done correctly, you should eventually be the proud owner of a brand new Bahamut Summon Materia. Nice job!