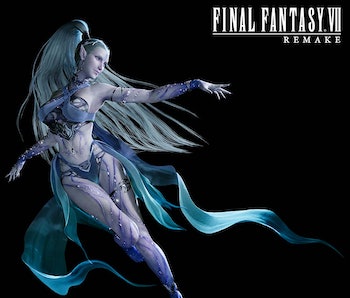 The Final Fantasy franchise has always been infused with magic and different technological weaponry, but some of the most powerful attacks come in the form of Summons, mythical sentient creatures that aid you in battle with devastating magical powers. The upcoming Final Fantasy VII Remake is no different. How they're used varies quite a bit from previous games in the series, but we already know many of them thanks to early pre-order bonuses.

Despite only covering Midgar — the earliest sections in the original that don't include any Summons — FF7 Remake will definitely include Summons. Square Enix first revealed Summons in the Tokyo Game Show 2019 trailer from September, and teased several of them as part of pre-order bonuses even before that.

FF7 Remake will have a mix of Summons featured in the original Final Fantasy VII and others from across the wider Final Fantasy-verse. In the original, Summons worked like one-off superpowered magical attacks, where the Summon would attack the entire group of enemies after a brief charging period and then disappear. Things will be quite different this time around, however, and Summons will be much more limited.

"Players equip Summon Materia, and that Materia resonates when fighting bosses, or certain powerful enemies, when certain conditions are met," Game Producer Yoshinori Kitase said in a November 2019 interview. "Summons give you a chance to perform some extremely powerful attacks, and fight with a potent ally when taking on tough bosses." They'll function more like Link Summons from Kingdom Hearts III rather than the original Final Fantasy VII's, fighting in concert with Cloud and his allies before making a final attack.

Here's a look at all the Summons confirmed for FF7 Remake.

Unlike the following summons on this list, Chocobo and Moogle haven’t appeared in any core Final Fantasy titles since the original released in 1997. They’re a dynamic duo of two mascot characters: Chocobo, the yellow bird creature that you can ride in nearly every Final Fantasy game (except this one, but we expect rideable Chocobo in FF7 Remake Part 2) and a Moogle, an impish critter that sometimes appears as a merchant or a random cameo character.

When they teamed up for the original FF7 summon, the two were the first summon you obtained, which occurred right after departing Midgar. They created a non-elemental attack called "Deathblow!!!" and would occasionally inflict Stop on foes. There was also a powered-up version of the summon where a fat Chocobo appeared without a Moogle by its side.

In FFV7 Remake, the Summon can access various special moves like the Chocobo and Moogle blast by taking from the player’s ATB gauge. Without the ATB boost, they’ll still assist the player in combat. Upon departing they’ll let loose a stampede of Chocobo to decimate your foes.

Since debuting in Final Fantasy III, Shiva has shown her icy face in just about every subsequent game. She has little to no backstory, only being known as some kind of Ice Queen. Her appearance in FF7 Remake seems mostly unchanged.

When she’s out and about, the ATB gauge can be used to command her to use Heavenly Strike, an ability where she slams a full glacier onto a foe. Her final attack that most fans should recognize is Diamond Dust, where she engulfs the surrounding area in ice.

Like Shiva, Ifrit is a Fire spirit that has appeared in every Final Fantasy game since first debuting in the third title. Although unlike Shiva, he doesn’t necessarily appear as a summon, he’ll often switch sides, becoming a boss for you to defeat, as he did in Final Fantasy XV. His appearance can also shift between games. In FFXV, he looked like a human with a few more horns than most of us. In other appearances, he vacillates between a demon and a beast. No matter his outward form, Ifrit is consistently based around fire.

In FFVII Remake, Ifrit is back with his classic move ‘Hellfire,’ which allows him to engulf the entire stage in flames. Hellfire activates as he’s departing the battlefield. Similar to his contemporaries, it’s assumed he also has moves that can be used through ATB, though they have yet to be revealed since he debuted at the Tokyo Game Show.

The massive creature first appeared as a generic sea monster in Final Fantasy II. In FFIII, their role was expanded to that of a summon, that could assist the player in combat with their trademark water abilities. Like Ifrit, their position has vacillated between being a summon and a boss figure, but they remain a constant in just about every Final Fantasy title. Their appearance usually mimics what Sea Creatures are classically imagined to look like, but their gender and personality can vary between iterations.

We have little detail as to how they’ll act in FFVII Remake(since they’ve only been teased via a five-second clip), but judging from other summons available, Levithan will assist you in battle and you’ll likely have access to a few abilities via the ATB, then they’ll use their signature Tidal Wave ability as leaving the battlefield, drowning just about everything in water.

In addition to the growing list of summons native to Final Fantasy VII Remake, three summons that were absent from the original Final Fantasy VII are included as DLC. Currently, all three can only be obtained through pre-orders or purchasing special editions. It’s unknown if the trio will become separately purchasable DLC or if more DLC summons will be introduced later in the game’s life cycle. However, these are the three we’ve got!

Carbuncle has undergone some massive transformations since it first appeared in FFV, where they appeared as a macabre boss character with green skin and a massive jewel on their head. Following that terrifying debut, the creature has appeared throughout Final Fantasy titles, slowly evolving into a mascot character with each refinement. Different depictions resemble creatures like cats, rabbits, and foxes — but always with the jeweled horn.

In FF7 Remake, Carbuncle is acquired by either pre-ordering the 1st Class edition or the Digital Deluxe edition. Refining the appearance further, Carbuncle now looks closer to a dog and they have a massive head to make room for their signature jewel. The exact details of what they do is currently unknown, but from the available gameplay snippet, it appears they’ll buff you and your party when summoned.

Like so many characters on this list, Cactuar began life as a foe — not a boss of any sort, just a run-of-the-mill foe. They’re also a popular mascot character for Final Fantasy and often they’re the go-to creature used when games need a light Final Fantasy reference, having appeared in Assassin’s Creed: Origins and Mario Hoops 3-on-3. Their appearance has changed minimally since their debut, they’ve even maintained their signature running pose.

Cactuar appeared in the original FF7 as an enemy you could run into on desert islands. They can now be summoned in FFVII Remake if you purchase either Deluxe Edition, Digital Deluxe Edition, or the 1st Class Edition. In the remake, Cactuar uses their classic 1000 Needles move to attack foes with a stream of needles. When they’re departing, Cactuar will expand their stream, launching needles in all directions from their body.

Chocobo have appeared in Final Fantasy titles since the franchise’s inception, but the baby variant first debuted in the FFV. Since then, it's primarily been used as adorable Chocobo eye candy or to illustrate that, like us, Chocobo can have children. Who knew?

The Chocobo Chick in Final Fantasy VII Remake is one of the few times the species has become a Summon. It seems to intermittently attack a foe with Lightning, of all things, while on the field. Then it lets loose a massive explosion before leaving. Isn’t being cute and deadly the darndest thing?

Final Fantasy VII Remake will launch for PS4 on April 10.