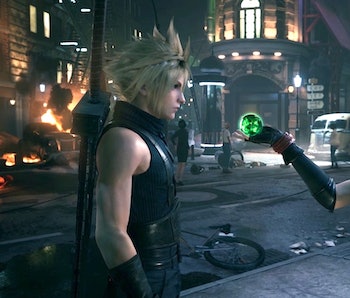 In Final Fantasy VII Remake, magic spells, new abilities, and stat boosts can be obtained by equipping Materia to each character's offensive and defensive equipment. The original PS1 game's Materia system allowed for virtually limitless customization: any character could be a formidable magic user, a defensive tank, or a long-range fighter. That isn't so much the case with FF7 Remake, where party members have more clearly defined combat roles. Still, getting a handle on some key Materia basics early on will be a huge benefit in the long run. Here are the five most important things to know.

As in the original game, there are five varieties of Materia:

When you meet Chadley in the Sector 7 slums, his first offering to you is a piece of yellow Assess Materia. Using this during battle takes one ATB charge and offers a detailed rundown of your opponents strengths and weaknesses. It sometimes suggests techniques to use against them.

Back in the 90's, we called this one Scan, and it wasn't all that useful. This time around, it's essential. You'll need to use it to complete several of Chadley's research challenges. What's more, some of FF7 Remake's challenging mid- and late-game bosses will slap you silly if you can't quickly stagger them into submission. There might be a a couple tough battles where you use Assess and restart the battle with a new Materia setup for your team.

Tifa's a good option to equip this, as her ATB gauge tends to fill fast given her high speed stat. This also pairs well with the Whistlewind Scarf accessory, so you can use Assess right at the start of battle.

3. Summon Materia is less important than the original game

There are only a handful summons available in FF7 Remake, presumably because this is only the first slice of a larger story. You can only use summons in boss fights, and each character can only equip one red Materia in a single, isolated slot. Summons will appear on the battlefield for a limited time, and anyone in your party can issue commands to them using the ATB gauge.

While it's nice that summons don't take up space on your equipment, they cannot be paired with blue Materia for added elemental damage or protection. (Hades + Elemental used to be a handy pairing in the orginal FF7 to basically immobilize most run-of-the-mill enemies with status effects.) Overall, summons are less important in this version of FF7, though they can certainly help you out in a pinch.

As in the 1997 version of the game, equipping a summon will provide you with a variety of stat boosts. Ifrit is a good one to equip on Cloud or Tifa, as it bumps strength, defense, and other stats suited to a melee fighter.

2. Magic Materia can be mastered fast, but doesn't duplicate

Maxing out Materia, especially some late-game summons, can take a very long time in the original FF7. That process happens far more rapidly in FF7 Remake, but there's a pretty big caveat. You won't get a second, new Materia once you max one out anymore. You'll have more Materia than you can possibly use all at once fairly early on in FF7 Remake, but there are a few that you can only get one of.

1. Elemental and All / Magnify Materia cannot be purchased

Elemental, a blue support Materia that imbues any character's weapon or armor with a magical element, is one of the most useful items in all of FF7 Remake. With so many bosses and enemies weak to one or more elements, you'll wish you had one for everyone. (You'll be pairing this with Lightning a lot for all those Shinra security bots.) Unfortunately, there's only one, and it's found in Chapter 6, down a ladder that's a slight detour from the third sun lamp.

All, another blue support Materia that was ubiquitous in the original FF7, has been renamed Magnify in the remake. It makes any single-target spell effective on all enemies or party members. There's only one of them to be found in a single playthrough, and you can't buy it in shops. You'll see it plainly during the final robot-arm puzzle in the Sector 6 tunnels, just drop Aerith off nearby.

While this may seem like a major change, the updated combat system means Magnify is nowhere near as useful as All was in the original game. You probably won't miss it much, and given the fast pace of combat, your party will already be attacking multiple enemies at once. The Prayer materia is a decent workaround for full-party healing that won't eat into your MP. Magnify + Binding is a fun pairing for dungeons where you run into large hordes of enemies, as you can usually knock some of them to sleep briefly.