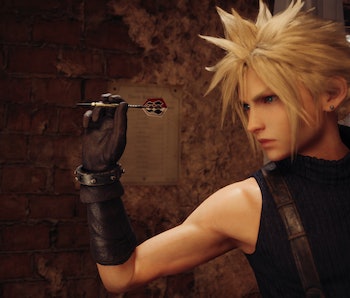 Like most role-playing games, Final Fantasy VII Remake allows you to boost the base stats of your party members by accruing experience points, or XP. Everyone understands what HP and Attack stats mean. But do you have any idea what attributes like Spirit, Vitality, or Luck do?

These stats can help you make the most of Cloud, Tifa, Barret and Aerith's equipment and weapon upgrades, enabling you thrive in the game's complex combat system. It might even make you rethink the value of seemingly throwaway add-ons, like the Luck Up Materia.

In the Materia and Equipment section of the Final Fantasy VII Remake pause menu, you'll see a daunting wall of 10 categories with numerical values. The meaning of these attributes makes less sense the further down the list you go.

Attack, Magic Attack, Defense, and Magic Defense seem the most important straightforward at a quick glance. What you may not realize is that those figures are each directly impacted by base stats in Strength, Magic, Vitality, and Spirit, respectively. Equipment and upgrades, including Materia, further augments those values.

The way these values translate to your characters can also be a bit surprising. Barret is more or less a physical tank with his high Vitality, but low Spirit means his Magic Defense suffers. Aerith is the opposite: she's vulnerable to physical attacks, but can handle magic blasts better than anyone else due to her high Spirit. These are important things to consider when prepping for battles.

Luck and Speed influence combat in ways that are even more surprising. A higher Luck stat increases a character's chance at successfully using the Steal Command. More importantly, it increases a character's chances of doling out a critical hit for twice the normal damage. For characters with high Strength and therefore Attack (Cloud and Tifa), a moderate boost to Luck can go a long way towards increasing overall damage output. Therefore, fully upgrading the Luck Up Materia to boost luck by 50 percent is well worth the investment.

Bonus: Make sure you take the top score at the darts game in Seventh Heaven early in the game, because the reward for it, which you won't get until later, will be a Luck Up Materia.

Another under-appreciated attribute is Speed. It increases the rate at which the ATB gauge charges, so it's particularly worth prioritizing for Tifa's weapon upgrades. More ATB charges translates to more opportunities to use abilities and magic.

The nuances of how stats influence each other in FF7 Remake isn't immediately clear, but for anyone looking to thrive, particularly in Hard Mode, it's essential.