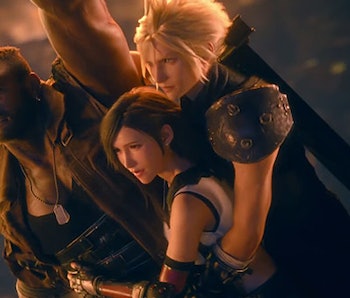 When the Final Fantasy VII Remake demo released in March, certain users found it to be a bit too easy. With the full release of Final Fantasy VII Remake some fans might be clamoring for something a little bit more challenging than Classic, Easy, or Normal Modes. That's where a Hard mode would come into play. Can you reach a higher difficulty in FF7 Remake?

Does Final Fantasy VII Remake have a Hard Mode?

There is a Hard Mode available in Final Fantasy VII Remake, but it isn’t available by default. Players will have to first beat the game on one of the other difficulty modes before Hard Mode is unlocked for future playthroughs. Upon completion of the game, players will also unlock the ability to replay the entire game by selecting specific chapters to play on Hard Mode. It's possible to cherry-pick which chapters to replay, and all progress from previous playthroughs carries over.

Enemies are much more powerful and every encounter awards the player with double the experience and triple the AP, making it that much easier for them to grind towards the level cap of 50.

With the above additions, Hard mode is essentially a New Game+ mode. You retain your level and inventory. All foes will scale to your level, making every portion a challenge. You'll never be able to over-level.

Hard Mode disables items, making a proper Materia loadout essential. You'll need to use your MP sparingly, especially in endgame fights. You won't have an Ether to fall back on this time around.

There's new content to experience as well. Hard Mode adds new foes and levels to the game. There's a new Shinra Combat Simulator available in Chapter 17. If you can best every bout in the simulator, you'll unlock a secret final boss, the Pride and Joy prototype. Before attempting Hard Mode, you should try maxing out your endgame Materia and perfecting your equipment.

What equipment do you need for Hard mode?

With MP scant and items unavailable, you're going to need some Materia to make up the difference.

At the highest level, Chakra Materia will restore up to 40% of the user's health and cure poison. This is an essential replacement for the Antidote and Mega-Potion items. You can find a Chakra Materia in Tifa's inventory when she joins your party. Extra Chakra Materia can be purchased in-game from vending machines.

Prayer Materia will help with all your group healing needs. At the highest level, a Prayer Materia heal will most of your parties HP, allowing you to bounce back from the most fatal encounters. You can find Prayer Materia in Aerith's inventory when she joins or during the Corneo's Secret Stash quest in Chapter 14.

Given how much you'll be relying on your ATB now, the ATB Boost Materia is a necessity. It will double your ATB when activated and has a two minute cooldown time when fully upgraded. It can be purchased from Chadley after completing Battle Intel Report 4.

AP Up Materia will make leveling up all these other Materia easier. It doubles the linked Materia's AP gain rate, stacking with the triple AP boost native to Hard Mode. AP Up is obtained by transforming a Pedometer Materia found near Aerith's house in chapter 14. You need to take all 5,000 steps to prompt the transformation.

In addition to these, purchasing stat-boosting Materia like HP Up, MP Up, Magic Up, and Luck Up will surely aide your venture through Hard Mode.

Other than Materia, just make sure to upgrade your weapons properly.

How hard is Normal Mode in Final Fantasy VII Remake?

Inverse reviewed Final Fantasy VII Remake prior to launch and played entirely on Normal Mode. “Late-game bosses will make you whimper if you don't have the right setup," Inverse's Jen Glennon wrote in her review. Even on Normal Mode, the player has to change the setup of their character's to handle some of the more challenging encounters. That involves adjusting what Materia (magical orbs) they have equipped, which weapons characters use, and more.

Normal is mostly “well balanced and requires consistent yet thoroughly satisfying tweaks to your equipment and strategy.” Most gamers will undoubtedly experience “a few game overs” during their Normal playthrough. Despite what the demo’s difficulty may have implied about the full game and how easy some of the earlier sections are, Normal Mode still provides quite the challenge.

What about the other two default settings: easy and classic?

Are Easy Mode and Classic Mode worth your time?

Like, Normal, the Easy difficulty setting presents some challenges but doesn't require players to put a whole lot of thought into their gameplay.

Classic Mode, which the developers initially touted as a return to the turn-based RPG format found in the original FF7, is just Easy Mode with characters on auto-pilot. A September 2019 Square Enix blog post revealed that Classic Mode was intended to put an emphasis on a "combat system [that] is all about giving players a choice in how to play."

While Classic Mode does confine you to playing solely via menus, it will likely not provide a proper challenge as the gameplay will still be on Easy Mode. Rather than providing an alternative way to play, Classic Mode simply removes aspects of control from the player's hands and automates them.

If you can handle Normal Mode, neither Classic Mode nor Easy Mode is worth your time.

This article was originally published on April 6, 2020