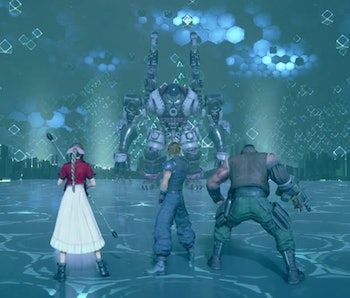 After beating Final Fantasy VII Remake and reeling in the wake of the ending, you’ll be given a new optional task of playing the game again on Hard Mode. On Hard Mode, there are several bonus challenges that conclude with a fight against FF7 Remake’s secret final boss: the Pride and Joy prototype. Alas, unlocking and beating Pride and Joy can be difficult, so we’re here to help you get through it.

To unlock FF7 Remake’s final bout, you need to have collected all of Chadley’s intel reports, beaten every Corneo Colosseum Fight (found within Chapters 9 and 14) and completed all 13 Shinra Combat Simulator missions available in Chapters 16 and 17. If you believe you’ve done all that but still don’t see it, you might have missed Aerith’s fights. She has a solo fight available in the Corneo Colosseum immediately after finishing the first story-mandated Colosseum mission. Aerith also has a solo Shinra Combat Simulator mission available in Chapter 17, which becomes available after beating FF7 Remake’s story.

If you believe that you completed all the Shinra Simulator Missions but it’s still not showing, head back to Chadley while playing on the newly unlocked Hard Mode difficulty. He should have a few more missions available.

Once you’ve completed everything, Chadley will unlock the fight against the Pride and Joy prototype in the Shinra Combat Simulator. How do you prepare for the fight?

While preparing for the Pride and Joy Prototype, expect a five-round brawl.

For the first four rounds, you’ll be up against the Summons that Chadley previously asked you to face for his research. The order goes Shiva, Fat Chocobo, Leviathan, Bahamut (who will summon Ifrit to aide him midway through the battle), then it ends on the Pride and Joy prototype. You’ll need to prepare for the entire gauntlet. You won’t have access to items, so you can’t rely on Phoenix Downs if a party member goes down. Firstly, make sure your party is comprised of Cloud, Barret, and Aerith. Cloud and Barret should focus on doing damage while Aerith takes a supporting role as healer.

Equip every party member with at least one HP Up, Healing, and Raise Materia. In addition to those, give Aerith Magnify with Healing, two Magic Ups, and two MP Ups. Place your Elemental Materia on Cloud’s armor and on Barret’s armor with Lightning and Fire attached, respectively. You should also provide Cloud and Barret with the Barrier Materia for added protection. You need Manawall to keep everyone safe.

Make sure to only use Materia with maxed-out AP as well. If you don’t have enough to fill your team, then it’s time to grind away. Once you’re ready, head to the Shinra Combat Simulator and start up the mission.

Now that you’ve made it through the initial four fights, you’re onto Pride and Joy prototype. Surprisingly, it will actually be the easiest fight in this mission. All of their attacks will be close range, so keep Aerith and Barret at a distance while Cloud occupies its attention. Even if either go down, Aerith should still be able to revive them as needed.

You should also try attacking the boss from behind. It’s incredibly slow at turning and will be staggered if you can destroy both of its feet. Save your MP for if the boss grabs anyone in your party. Bombard them with their weakness, Thunder attacks, when an inevitable grab occurs.

Compared to the earlier fights, this should be fairly smooth sailing from start to finish.

Once you’ve won, you’ll be awarded the game’s best accessory, Gotterdammerung, allowing you to activate your Limit Break right as the battle starts. Once used, the accessory will also refill your Limit Break gauge gradually as the battle progresses. Because of this, you should try getting Pride and Joy out of the way immediately after finishing the main story, giving you a huge boon for Hard Mode, even though the mode doesn’t allow for items.