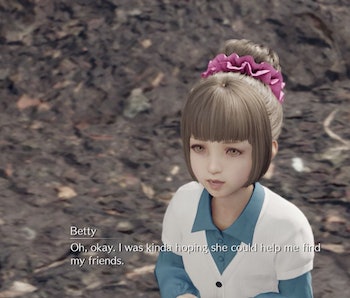 As soon as Final Fantasy VII Remake opens up a bit in the Sector 7 slums during Chapter 3, you'll gain access to several sidequests, and one of the first tasks you with finding a young girl's three cats. Most of these tasks are straightforward and simple, but finding the "Lost Friends" can be a bit challenging for anyone that's new to Midgar. For anyone struggling to find Betty's cats, here's a quick look at their locations.

To start this quest, you'll need to talk with a child named Betty. While she plays a bigger role later on in FF7 Remake, this side quest serves as her introduction. You can find her in the Sector 7 slums playground and will see that she's sad as you approach. The cats she likes to hang out with have gone missing! Once Cloud begrudgingly agrees to find them for her, you'll start "Lost Friends."

Betty gives vague hints on the location of each cat, but the felines can still be hard to find if you are unfamiliar with the Sector 7 slums. At least the first one isn't too far from where Cloud and Tifa begin the quest.

The first cat Cloud will run into is right by the item shop. There, you'll see a resident who wants to talk to you by a metal tunnel that says she saw some cats sneak in there. Crawl in there, and you'll find a mini haven for Sector 7's cats, one of whom will run off when you try to touch it. Even though it might seem like you now have to pursue this one cat all around town, you've essentially chased it into returning to Betty. This'll be the case with each of her three white cats.

Where to find Cat #2 — Seventh Heaven

You can find the next cat right outside of Seventh Heaven, Tifa's bar and the headquarters of the Avalanche crew that Cloud works with right in the center of the Sector 7 Slums. Just approach the cat and interact with it in the same way you did the first one. It will run away from Cloud and back to Betty. While you can find all three cats in any order, this one's a good second choice as it's located right in between the other two cats.

The final cat can be encountered on the road between Seventh Heaven and Sector 7's train station. When you walk around this area, you should hear a cat nearby. Tifa will even comment on it. Look around and you'll see the cat out in the open. Interact with it just as you did with the last two and you can now go back to Betty to finish the quest.

Once you have found all three cats, return to Betty. While Cloud and Tifa will initially apologize for not helping much, the cats will show up and Betty will be overjoyed. The rewards for this aren't much: Your HP and MP will be restored (which is the case for all quests), and you'll get a Maiden's Kiss.

This item cures the "toad condition," a funny status condition you won't encounter until you're much further into FF7 Remake. While the rewards aren't impressive, this is a cute side-quest that develops a character you'll be seeing again later in the game. It also forces you to explore most of the Sector 7 Slums, so it's a good quest to start with.