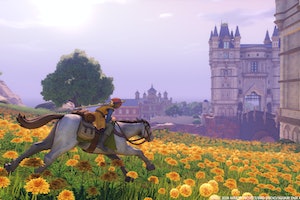 games from your backlog

Let’s face it: 2021 might not be the biggest year for video games.

Many high-profile games are slowly shifting into 2022 as the long-term effects of Covid-19 on game development become clear. Everything from Destiny 2: The Witch Queen to Gran Turismo 7 has been pushed back, making this year’s schedule look lighter than usual.

A weak year for games presents an opportunity. Without rapid-fire releases every month, players have a rare chance to chill out and play some games they didn’t have time for. That could be some indies in the backlog, a live service game they’ve been meaning to keep up with, or a gigantic RPG that demands more time than an average action game.

With that in mind, 2021 is unofficially the year of the RPG. It’s time to dust off that 100-hour game that you’ve had your eye on for years. Here are seven games that you need to play while you actually have the time, ranked by just how much they’re worth spending your valuable time on.

As far as RPG franchises go, the Tales series has flown under the radar compared to behemoths like Final Fantasy. With Tales of Arise coming later this year, it’s a good opportunity to dig in starting at Tales of Vesperia. The Xbox 360 classic is notable for its colorful cel-shaded visuals and the hilariously named Evolved Flex-Range Linear Motion Battle System. Best of all, the definitive edition is available on Xbox Game Pass and it features full HD graphics and new content.

For those looking for a more Western RPG experience, it’s a great time to dive into Fallout 4. The post-apocalyptic shooter made its way to Xbox Game Pass via Microsoft’s Bethesda acquisition, so it’s easier than ever to access. The game takes classic RPG systems and places them into a dark third-person shooter filled with sci-fi weapons and oversized roaches. If turn-based combat isn’t your thing, but you still like seeing stats go up, this is the style of RPG for you.

With a new Dragon Age game somewhere on the horizon, 2021 is a good opportunity to catch up on the last entry in the series. Dragon Age: Inquisition is available to play on EA Play (and Xbox Game Pass, by extension), and it’s worth the hefty time commitment. BioWare’s standout action RPG boasts an epic story, deep customization, and gigantic, dragons, naturally. If you’re tired of playing Skyrim, this is a logical next step.

The Dragon Quest franchise is truly the granddaddy of JRPGs, but it’s still somewhat niche depending on where you are in the world. With so many entries, it’s overwhelming to find an entry point when it comes to a franchise with so much history. Luckily, the most recent game is as good a start as any. Dragon Quest XI is an excellent JRPG that features traditional turn-based combat and a classic fantasy plot. With over 100 hours of content to dig through in the definitive edition, it’s sure to keep you occupied for a while. Plus, it’s on Game Pass, which is always a good excuse to play something.

While we’re mostly calling out individual games here, the Yakuza series as a whole deserves a spot. The series is a beat-em-up/RPG hybrid that’s equal parts crime melodrama and slapstick comedy. The games beg to be played one after another as if binging a soap opera. Luckily, that’s easy to do with Xbox Game Pass. The service has six games in the series, from 0 to 5, and will get Yakuza 6: The Song of Life as of March 25, 2021. Once you get through those seven games, make sure to play Yakuza: Like a Dragon for a more traditional turn-based RPG that might be the best entry in the series yet.

Final Fantasy VII was widely considered one of the greatest video games of all time when it first launched. Its remake now holds that same title today. Final Fantasy VII Remake is a tremendous action-RPG that’s genuinely profound and unabashedly goofy in the same breath. It features a reimagined, active battle system that really makes players think closely about how they use their precious, magical orbs of Materia. With new content on the way via the game’s Intergrade update due out in June 2021, you might want to set some time aside to check it out. Don’t forget that PS Plus subscribers can download it for free until the end of March 2021.

You never saw it coming ... or maybe you did? Persona 5 is one of the best RPGs of the past decade and also one of the hardest to find time for. With the main story clocking in at around 100 hours alone, it’s a serious time sink that requires months of free time. The commitment is worth it though; You simply won’t find a game as stylish as this. With a fantastic cast of characters, an enthralling story, and top-notch turn-based combat, Persona 5 is the pinnacle of the genre. And it looks cool while doing it. If you have PS Plus, make sure to check it out as part of the PS Plus Collection.