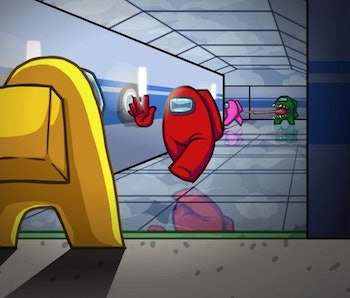 Innersloth's Among Us thrives with an easy-to-understand formula of completing tasks as astronaut Crewmates while weeding out the alien Imposters aboard your ship. While it was initially released in 2018, the has become a runaway success thanks to Twitch and YouTube content creators. It even came to Nintendo Switch on November 15 and will be released for Xbox One and Xbox Series X in 2021.

Because of the game's popularity, a modding scene for it has emerged on PC. One of the most exciting mods for Among Us mixes up the experience entirely because it increases the player count to 100. Whether or not the prospect of playing Among Us with 99 other people entices or horrifies you, here's how you can try it out.

100-player Among Us was popularized after various influencers like Socksfor1 and Mr. Beast Gaming played 100-player matches with his friends. This isn't a mode that can be accessed normally in the game, as Among Us matches can only have up to 10 players. Instead, it's played via a modded server created by the aforementioned Socksfor1.

In these oversized Among Us matches, there can be up to 10 Imposters, and they'll have to mostly kill out in the open and around other players. The giant crowds make it hard to discern the identity of the Imposters until very late in the match. From the videos released by Socksfor1 and other influencers like Mr. Beast, this mod brings pure chaos to Among Us as dozens of people are voting on who they think is the Imposter based on minimal info.

While it isn't an easy mod to get a hold of, it does put a refreshing twist on what is otherwise a relatively simple game, filling the void as Innersloth works on actual updates.

How to get this mod for yourself

As a multiplayer game, mods aren't typically welcomed in Among Us. As such, this isn't available in a private match in-game or straight from Steam Workshop. Instead, you'll have to go to the special server set up by the influencer that made the mod. Specifically, YouTuber Sockfor1's SockDrawer Discord does let players access this mod. But you won't gain access to the mod as soon as you join.

Is a 100-player Among Us mode available publicly?

As this 100-players mode was not officially sanctioned by the developers, it's not going to be added to the game anytime soon.

Matches this big also make the game more chaotic than fun and would put a lot of stress on the game's servers, so it's doubtful that Innersloth would even pursue 100-player matches officially even though this mod shows that it's possible.

Hacking is also frowned upon in multiplayer games like Among Us, so any attempts to hack this into the main game would result in a ban. Still, the popularity of these videos does indicate that there is interest in Among Us player counts being increased in the future. As for the mod itself, the Discord Server's rules do tease that a public release could happen in the future, but for now, it's just for more dedicated members of the Socksfor1's community.

Is 100-player Among Us available for Nintendo Switch?

No, it isn't. As we mentioned, this is a mod for the PC version of Among Us, so it's impossible to access it when playing on other platforms. iOS, Android, and especially Nintendo Switch have much stricter rules when it comes to modding and hacking games, so it's very unlikely that the mod will ever see the light of day on those platforms.

As such, don't expect it to work on the Xbox version either. The only big upcoming shift for the mod will be the new Airship map in 2021. It is currently unknown if the mod will support this map when it comes out.

Among Us is available now for PC, iOS, and Android.