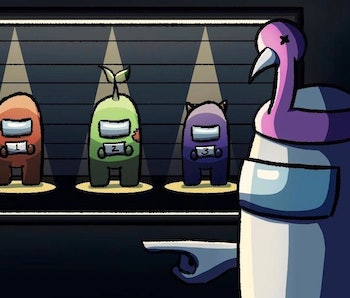 Among Us has become an obsession for millions of gamers (if Twitch viewership is any indication), and its three-person development team — InnerSloth — is planning a number of updates to improve and expand the murder-mystery game.

InnerSloth broke down a couple of the changes it wants to add to Among Us during a September 23 blog post and the trio of devs appeared on Twitch's Weekly Gaming Show on October 1 to discuss its future plans for the title. The team has a number of unannounced tweaks it wants to add to Among Us, like new player roles and game modes, but devs Forest Willard and Marcus Bromander also teased an idea for making the most boring part of Among Us more enjoyable.

What if Ghosts could do more?

Among Us hit three million players across all platforms on September 28 more than two years after its 2018 release. The game puts six to ten players aboard a spaceship where the "Crewmates" are tasked with figuring out who among them are the "Imposters" before the Imposters murder them all.

When a Crewmate or Imposter is killed in a game of Among Us they become a Ghost. These specters can no longer speak in crew meetings, and they can only complete their remaining tasks (if they're Crew) or sabotage parts of the map (if they're Imposters). Ghosts can have a slight impact on the result of a game but typically just float around waiting for the next round to start.

It's a stale part of the game which Bromander admitted needs to be addressed, particularly because the vast majority of players simply leave a match after they die.

"We do want to make being ghosts more fun," Bromander said during the stream October 1 stream. "If you get killed first that sucks. Your game is boring. If we can figure out something to make it more interesting for the first person killed or maybe all Ghosts..."

A Twitch viewer suggested InnerSloth could allow Ghosts to open doors for living Crewmates to help them escape the clutches of an Imposter. Interviewer Cassandra "Friskk" proposed letting a ghost reanimate itself, which wouldn't work because the revived crewmate would know exactly who killed them.

This discussion lead InnerSloth's Willard to reveal that while changing the Ghost's roles might be tough to balance, it's something the team is spending time on right now.

"[Balancing a change like that] is the hardest part," Willard said. "We’ve thought of a lot about [making ghosts into] Guardian Angels and stuff like that, but it’s a difficult thing to pull off but we’re definitely thinking about those sort of things."

Neither Willard nor Bromander went into detail about what exact changes could be coming to Ghosts, but Willard's mention of "Guardian Angel" might have been a tease for an upcoming Ghost ability.

What if Ghosts had one chance to block an Imposter from killing a Crewmate with a "Guardian Angel" ability that can only be activated the moment an Imposter goes in for a kill? To keep things fair, only the Imposter would be notified that their kill was blocked and the living Crewmate wouldn't see anything.

In the Mafia party game that Among Us is loosely based on, a town infested by mobsters tries to discover who the criminals are in their midst, and roles like the Doctor can block a player from being killed. Typically, the Doctor can protect anyone, even themselves, but in some rule variations, the "Guardian Angel" can only save other players. So this is clearly the inspiration between the Among Us developers' ideas.

Adding a mechanic like this would make playing as a Ghost much more complex — and it would give players a reason to stick around. Typically all you need to do is float around the map and finish your tasks to help your team win, but with a Guardian Angel ability, you'd have to follow an Imposter around and try to block their kill instead of doing tasks. And your performance would still be crucial to the Crew's survival.

This is nothing more than speculation for now, but with InnerSloth's plans to heavily update Among Us and the fact that they see the Ghost role as boring in the game's current state almost guarantees that there will be a change coming to undead crewmates. And in general, it's a good indication that the team is considering adding even more roles to the game at some point in the future.