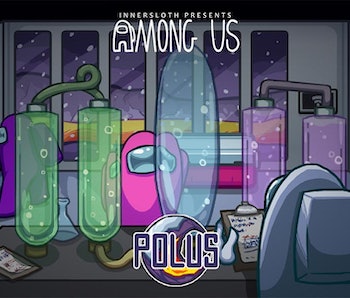 Among Us might have been released all the way back in 2018, but the murder-mystery game's spike in popularity at the tail end of summer 2020 has rivaled the meteoric rise of Fall Guys: Ultimate Knockout. But the internet's favorite social deduction game is still not available on popular consoles like the PlayStation 4 and Xbox One. One of its developers offered an explanation as to why that's still the case on Wednesday.

Among Us developer InnerSloth tweeted that the title hit 1.5 million simultaneous players on September 4. It has consistently remained the most-watched game on Twitch. So a console port would be the natural next step to continue the game's rise to stardom, right? Well, InnerSloth programmer Forest Willard explained that bringing Among Us to the PS4 and Xbox One is easier said than done.

Willard played Among Us and chatted with a group of Twitch personalities Wednesday night where streamer 5uppp asked if InnerSloth was planning on making the game's upcoming sequel — Among Us 2 — available on consoles. That's when Willard revealed the biggest obstacle standing in the way of a console version of Among Us: player communication.

"[A console port] is something we’re starting to talk about," Willard said on the stream. "But we'd have to write a system for quick comms ... for randoms, like Rocket League. I don’t know if we’d be able to implement console voice chat or not … One of the first things we’d want to add is a friend’s list type of account system … because it’s so hard to do anything without it."

Currently, Among Us doesn't have a built-in voice chat functionality. Players need to either use the in-game chatroom or hop on their own voice chat app, like Discord, if they actually want to speak to players in a lobby. InnerSloth could technically leverage the PlayStation Network or Xbox Live's voice chat servers, but the real issue would be figuring out a way for players who don't want to use voice comms to still play.

Among Us would either require players to use a mouse and keyboard so they can type (which is possible on PS4 and Xbox One but cumbersome) or create a quick communications system as Willard stated. This could look like ping messages in Rocket League or a variant of the communication wheel in Overwatch.

A solution like that could allow players to ask where a dead body is or accuse someone of faking a task, for example, but Among Us requires such complex exchanges of information that a quick comms system might not be enough.

Another potential solution could be making the console version of Among Us voice chat-only, which might work with friends but could get toxic and troll-y with random players. To top it off, InnerSloth would need to either rely on the voice system of each console (which wouldn't allow for cross-platform comms) or host voice chats on their own servers. The latter is basically impossible due to Among Us' enormous player volume and the fact that InnerSloth is a three-person team. Effectively maintaining servers with that many users would be a team effort on its own.

Even though a console port for the current version of Among Us is unlikely, there's hope for Among Us 2 to expand its horizons. Willard stated that Inner Sloth is actively brainstorming ideas of how to make it work and the sequel won't launch any earlier than mid-to-late 2021 based InnerSloth's announcement. So there's still plenty of time and hope for the team to test the console waters.

Just don't expect any console ports for Among Us whatsoever, because it's far more likely that the team will try to implement the necessary changes so the sequel can launch across multiple platforms.

Among Us is available on PC, iOS, and Android now.