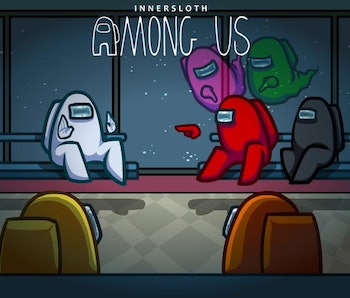 Among Us pits friends against each other in a murder-mystery party game that has become the obsession for millions of players two years after its initial 2018 launch.

Each game consists of four to ten players that control an armless astronaut aboard a spaceship or space station. The catch is that one to three of those crew members are "imposters" or vicious assassins whose objective it is to murder everyone in the game. In the event of your avatar's death, you'll remain as a spectral figure. Surprisingly, there's still plenty you can do to help your friends survive.

The rest of the crew must try to escape the imposters' clutches by completing a series of mundane tasks assigned to them, or by weeding out and voting off the killers during crew meetings. These meetings are the only time players can speak to each other, and they can only be called when someone finds a dead body or calls an emergency meeting.

Crewmates or imposters who die or are voted off turn into ghosts that are invisible to everyone who isn't a ghost. They have an unlimited vision of the map and can travel through walls, but can no longer speak in meetings. While it might feel like you're utterly useless once you die in a game of Among Us, both crewmate and imposter ghosts can still play a pivotal role in helping their teammates win the game.

Here's how to make sure you don't die in vain:

What to do as a crewmate ghost in Among Us

If your neck is snapped by an imposter as a crewmate, you won't be able to tell your team who the killer is, but you still have the ability to complete your tasks. In fact, all ghosts must complete their tasks if the crewmates want to win by filling out the taskbar.

Once you die, it's pivotal that you complete the rest of your duties to make it as easy as possible for the remaining crew to complete the taskbar. Doing nothing can result in a loss if your living teammates aren't able to vote off the imposters. But be wary: Skilled imposters can use the fact that you are doing tasks to their advantage.

2. Be aware of who's in the room when you're doing tasks

Ghosts are also able to complete tasks with visible animations (Clearing Asteroids, Empty Garbage, Prime Shields, and Submit Scan). Imposters aren't able to see what tasks ghosts are doing, but if they happen to walk into the Weapons area of the Polus map while you're clearing asteroids as a ghost, for example, they can lie to the crew and say it was them doing the asteroids.

Be mindful of this possibility and try to complete tasks away from the living crew to avoid any potential confusion.

Aside from these two task-related rules of thumb, crewmate ghosts can't do much else to help. They're unable to assist during fatal emergencies that imposters are able to activate through the Sabotage menu. It's still completely up to the remaining crewmates to stop a reactor meltdown or oxygen failure from causing them to lose the game.

What to do as an imposter ghost in Among Us

Since imposters are always outnumbered, dying early as a killer is typically more detrimental to your teammates than the early death of a crewmate is to the crew. But while dead imposters can no longer kill crew members, they still have access to the Sabotage menu.

It's best to follow around living imposters and watch their backs as they go in for kills by shutting doors and occasionally sabotaging lights. Since you have superior vision compared to other imposters, you have the ability to see other crewmates coming and can divert them or lock them out of a room that your teammate is about to kill someone in.

While it's important to play this "eye in the sky" role as a dead imposter, don't call for fatal sabotages unless you know your fellow imposters don't know how to use them correctly. Sabotage cooldowns for everything else besides doors are linked to all other imposters, so if you call a reactor meltdown when a living imposter isn't ready to make a kill, it can cost them their most powerful sabotage in the game.

You'll want to typically stick to doors and occasionally lights if you know your teammate is about to get caught red-handed.

In either case, a crewmate or imposter ghost can make or break an entire match for their team if they know what they're doing — and now you do!