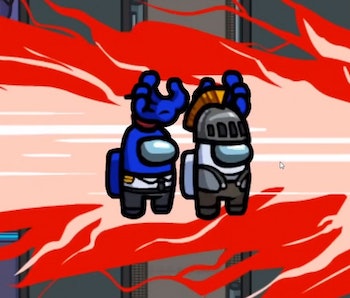 Among Us developer InnerSloth might have scrapped plans for the release of Among Us 2, but the three-person team has committed itself to improving the current build of the widely popular social deduction game. Earlier in October, the devs gave PC gamers an early look at a handful of changes that might make it substantially easier get away with murder as the Imposter.

InnerSloth released a beta version of three new features to PC users on October 10 that included one previously announced change and two surprise tweaks to the indie sensation that address some of the biggest gripes players have with the game.

Among Us puts six to ten players aboard a spaceship where the "Crewmates" are tasked with figuring out who among them are the "Imposters." If they don't do this fast enough, then the Imposters might murder them all. Unless a game is played with three Imposters, it is typically skewed in favor of the Crewmates who can also complete a set of pre-determined tasks to fix the ship and win the game.

But two new features being tested in the beta could seriously buff imposters' odds of winning.

Note: Inverse reached out to InnerSloth about when these changes could be rolled out to mobile but did not hear back in time for publishing.

Adding symbols to the wires has improved the game as a whole, but the previous two patch notes are clearly in favor of the Imposter. Both additions are completely optional, so players can continue playing Among Us like they have been for months, but using these beta features could eliminate two strategies that Crewmates consistently use to win: task bar tracking and voting someone off based on their aggressive voting record.

One of the defining traits of the Imposter is that they can't complete any tasks, which means they need to fake their duties to blend in with the rest of the crew. Before the beta, a group of Crewmates could follow others around to see if they were faking their chores based on whether or not the bar would go up when they walked away from a task.

Only having the task bar visible during meetings or eliminating it completely keeps Crewmates from using this strategy in the game altogether.

Aggressive voting is no longer dangerous

As an Imposter, you're always looking for the easiest way to net a kill and sometimes that means casting a vote for an innocent Crewmate that another player is suspicious of. Before the beta, every vote would appear on the screen so voting to eject someone with little to no evidence could put you in the hot seat.

Turning on anonymous voting will let imposters piggyback off of baseless accusations without being in danger of raising suspicions about themselves. That will make it easier for imposters to score kills in meetings, which takes the pressure off of them to orchestrate the perfect crime every round.

Again, both of these changes are completely optional but if you find your group of friends consistently winning games because of the two aforementioned crewmates strategies it could be time to try out InnerSloth's new beta changes to level the playing field.

Among Us is available for PC, Android, and iOS.

More like this
Gaming
Dec. 3, 2022
Eastward is the best dystopian RPG on Xbox Game Pass
By Mo Mozuch
Gaming
November 27, 2022
High on Life is 2022's most intriguing shooter
By Steven Asarch
Gaming
1 hour ago
One Marvel Snap Destroy deck is the secret to defeating any enemy
By Joseph Yaden
Related Tags
Share: