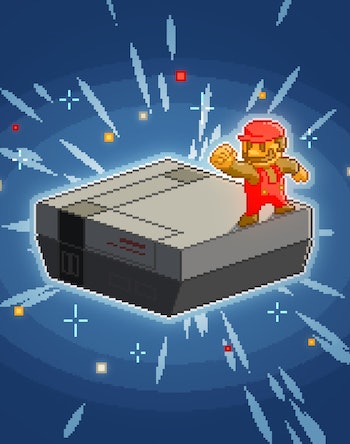 The video game industry has changed a lot in the 35 years since the U.S. launch of the Nintendo Entertainment System.

From online gaming to virtual reality, there’s a lot that the inventors of the NES never could have predicted. But the biggest surprise might be that the pixelated visual style invented out of necessity back in the 1980s is still relevant today.

The first Nintendo system to launch outside of Japan, the NES proved to be an unstoppable force, despite the efforts of competitors like Atari and Sega. Nintendo sold close to 30 million consoles in the U.S. alone by December 1991 and its life-to-date sales have surpassed 60 million. The NES was the definitive console of its generation, so much so that it inadvertently launched an “8-bit” game style that modern developers still use despite having nothing to do with 8-bit consoles.

Recent indie games like Shovel Knight and Undertale fall within the realm of “8-bit inspired” games because of their pixelated graphics and glitchy soundtracks. However, these tiles are far more advanced than anything the retro NES developers had the ability to create at the time.

Even though the upcoming November releases of the PlayStation 5 and Xbox Series X will make 4K graphics the home console standard, pixelated games still have a cult following. Titles like farm simulator Stardew Valley are often described as “8-bit retro” but these games are only 8-bit in appearance, not in soul.

Today, developers can choose whether or not they want their game to look like an 8-bit game or not , but back when NES developers were creating Metroid (1987) and Castlevania (1987), the look of the game was a necessity more than a stylistic choice.

What does 8-bit actually mean?

The true definition of the descriptor “8-bit” refers to the processors that powered consoles like the NES and Atari 7800 and has nothing to do with the graphics of the games they ran. So just how powerful were the internals of the NES?

For starters, one bit is a single binary value, which is the most basic unit of information a computer can process. One bit has two states — one or zero — that can also be represented by “true or false” or “on or off.” Computers basically encode data in these binary units to be able to move it, save it, and edit it. Think of it as translating how humans perceive the world into its most basic form so machines can act on information.

The concept of turning data into bits was invented in 1732 by Basile Bouchon and Jean-Baptise Falcon, who used a punch card full of small perforations to semi-automate a fabric weaving machine. The term “bit” was first used by mathematician Claude E. Shannon in his influential paper “A Mathematical Theory of Communication” that fundamentally changed how people can transfer and communicate data.

So what does the eight mean in 8-bit? That refers to the size of the unit of data a computer can handle, or its “word size.”

1-bit has two possible states (1 or 0), which means it has two places to store information.

The PS5’s memory interface will be 256-bits...I’ll spare you the math on that.

Consoles like the NES had exponentially fewer places to store information compared to modern-day consoles. This resulted in developers being extremely limited in what they could display on the screen at once. You can find examples of these restrictions in nearly every title launched on the NES.

The origin of 8-bit

Link couldn’t loot more than 255 rupees in the original Legend of Zelda because 256 is the maximum value an unsigned 8-bit value can hold. If you managed to make it to the 256th level of Pac-Man (better known as the “kill screen”) the game would essentially crash and turn into a jumble of letters and ghosts. But these 8-bit limitations were also responsible for the iconic graphics found in the Nintendo’s Kirby and Capcom’s Mega Man franchises.

The strict rules development rules required to run a game on the NES was like making an artist paint with one hand tied behind their back. The console’s picture-processing unit split what’s displayed on screen into two layers, the background and sprite later.

The background layer is split into 968 8-by-8 tiles. Developers were only allowed 256 unique color tiles to be on the screen at once so repetition was key and it could only show a maximum of 64 colors but only 13 at one time. The sprite layer, or the layer where the protagonist and enemies would move around in, had its own complex set of rules as well.

All of these restrictions led to the graphics that we now categorize as “8-bit,” but each of these games were designed to look like they were out of necessity, not artistic choice. The giant bosses in Mega Man 2 were actually a part of the background and not the sprite layer, while Batman Return of The Joker used a looped, animated background to fake movement.

By the early-to-mid 1990s, game developers had become proficient in 8-bit tricks of the trade, which led to the impressive environments (for the time) of Kirby’s Adventure and Excitebike. But can today’s so-called “retro 8-bit” really be called 8-bit?

Technically, no. That’s because they weren’t made with the 8-bit limitations that early developers operated under. For example, Shovel Knight might seem like it could run on an NES, but its developers Yacht Club Games had access to colors that weren’t available on the retro console.

So while game companies can certainly say their games are “8-bit inspired,” remember that the retro titles of yesteryear were essentially Macgyvered together with glorified calculators.

8-Bit Week is an Inverse celebration of the classic — and forgotten — games that pushed the boundaries of interactive entertainment in the 1980s and beyond.