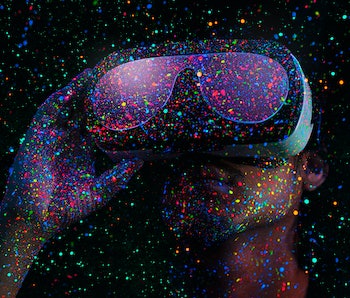 A team is reviewing plans for the next quarter. Someone shares a document of last quarter’s results for everyone to see, and their co-worker then shares images from a campaign a competitor ran. Boards are soon filled with sticky notes, images, photos, and videos. The ideas are flowing among the attendees.

This may sound like a typical meeting, but the difference is that the meeting space is virtual, and most people in attendance are digital avatars created from a single photo. This scenario is Spatial’s ideal use case. Users of the startup’s software — many of the largest companies have already trialed it — are typically wearing virtual reality headsets like those from Oculus or augmented reality glasses such as the Microsoft Hololens.

“Spatial creates a lifelike avatar that makes you feel like you’re sitting next to other people,” said Jacob Loewenstein, Spatial’s VP of business development and strategy.

For the past few years, tech enthusiasts have been dreaming up scenarios in which VR and AR will change the way we work, including using VR to walk through full-scale models and AR to extend a computer screen across an entire room. Some of these use cases have come to fruition, while others are still a few years away.

There’s been more urgency over the past few months for the solutions AR and VR can bring to the table, as many remote office workers have come to realize the limitations of video calls.

“Being in VR became more exciting when people started working from home,” Loewenstein said, who added that Spatial has seen a 1000 percent boost in interest over the past few months.

But while VR and AR may help fill in the gaps for meetings, don’t expect a workplace revolution any time soon.

“Is AR and VR going to drastically change the offices of today? I’d say no,” said Nikolas Badminton, a futurist and CEO of Exponential Minds. “If we’re working in the hybrid model of people working remotely, that’s where this technology can be applied. It won’t be a wholesale replacement.” He added that he’s “had friends who have worked remotely for the past few months in augmented reality headsets. They’ve shared virtual spaces and felt the presence of their co-workers. There’s a lot of potential to be together in a space instead of rectangles on a screen.”

Full workday presence is what Spatial is building toward.

“We’ve been working on this idea of ambient presence where you feel like your co-workers are with you,” Loewenstein said. Basically, you’d be working at home and “see” your co-workers in your room.

But don’t count on working in a virtual office anytime soon due to limitations of technology. While VR has made great strides in the past few years, headsets are still bulky, which makes them uncomfortable to wear for long periods of time, and users don’t have the ability to see their surroundings. Motion sickness also remains an issue for many people. There’s also affordability issues: The price for the most popular VR headset, the Oculus Quest, is $399 (and stock has been limited).

Loewenstein said the breakthroughs that will really be needed to bring VR into mainstream office life are the ability to track facial features and 5G capabilities, which will allow headsets to do more processing through the internet. Both may come in 2023.

AR — which is already used in sectors such as construction and manufacturing — holds more promise but also has bigger limitations. People don’t typically experience motion sickness with AR, since graphics are overlaid on the real world, but headsets are expensive. Microsoft’s Hololens 2 costs $3,500. Both AR and VR will need more computing power to generate environments the average person would want to spend a whole day in.

Badminton said AR technology will go mainstream when “they’re the size of glasses,” which he anticipates seeing from Microsoft, Apple, and Google. But he also said “we have to think about AR and VR beyond headsets. The windows we look at could be displays. We’re going to find a world of virtual and augmented reality all around us.” (He also pointed to Mojo Vision, which is developing smart contact lenses.)

Without jumping a few years into the future, AR and VR has already had a drastic impact on a field that affects all office workers: the design and architecture space.

“It’s impossible to avoid AR and VR at this point,” said Erik Narhi, an architect and computational design lead at the Los Angeles office of global design firm Buro Happold. “We’re using it on some projects as a standard way of working.”

For complex projects, Narhi and his team will import designs into software that will automatically build them into 3D models that can then be explored in virtual reality using headsets such as Vive Pro and Oculus Quest. They also use Hololens and smartphone-powered AR for visualizing buildings at city scale. This ultimately saves the firm time and money, and develops deeper connections with clients.

“Being in VR became more exciting when people started working from home.”

“It’s more immersive,” Narhi said. “You’re inside this building walking around. You’re getting to experience how people would experience it when it’s complete. You’re able to spot problems well before you usually would.”

Those problems include clashes, whether those are style issues or things that will fail inspection. But it also gives designers the opportunity to make improvements to flow, such as moving doors to increase efficiency. But Narhi doesn’t see the use of VR affecting the actual design of buildings, although it’s something his firm is looking into.

“I don’t know how VR would have an effect on design,” he said. “It’s improving the way we communicate the design to the client. It’s more about creating a higher quality product. The building will be more energy efficient and easier to move around.”

The future of offices

But will the use of this emerging technology alter the ways our offices are organized? It’s likely VR and AR will play into the office design trends that have already come to fruition: smaller spaces for less people in an office, a mix of open and private spaces, and more functional meeting rooms.

Narhi said that many architecture firms are already dedicating existing spaces for VR. Basically, it’s a room or area with the equipment needed for VR installed and minimal or movable furniture to allow for space to walk around with a headset on. He foresees other types of businesses following suit as more meetings are held virtually to accommodate a spread-out workforce and more money being poured into virtual meeting solutions.

Paul Richards, director of business development at HuddleCamHD, previously told Inverse that many meeting rooms will become more like TV production studios rather than collaborative spaces. That’s sure to include VR and AR equipment as well.

“People are going to carve out space for VR sooner rather than later,” Narhi said. “It won’t replace meeting rooms completely, but it’ll become something a meeting room will need to support.”

Narhi, Badminton, and Loewenstein all agree that offices will continue to play an important role in the future, no matter how AR and VR technology develops.

“A lot of people will still prefer human-to-human interaction,” Narhi said. “Catching up with people over coffee makes us happy.”

Loewenstein added, “There will be reasons to still go into an office. People will view it as a perk.” But he predicts big changes driven by AR and VR coming in the next decade. “It will look very different in 2030 than 2020 in a profound way,” he said. “It will have as much impact as access to trains once did.”

More like this
Gear
Jan. 23, 2023
Why Microsoft thinks ChatGPT (and not the metaverse) is its future
By Ian Carlos Campbell
Gear
Jan. 18, 2023
Apple's postponed glasses prove our AR future is further off than we thought
By Ian Carlos Campbell
Innovation
Jan. 16, 2023
3D-printed “organs” could lead to better drugs
By The Conversation and Chengpeng Chen
Related Tags
Share: