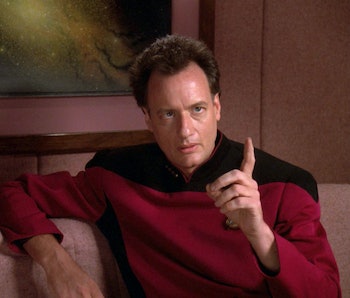 If you look closely, there are objects in the Star Trek canon that almost resemble the Infinity Stones of the Marvel Cinematic Universe. Check out the reality-bending Orbs from Star Trek: Deep Space Nine, for example, or the “time crystals” that Star Trek: Discovery haters loved to make fun of in Season 2.

Look even closer, and you may even see Star Trek’s very own Thanos.

Sure, the veritable space god Q has a better sense of humor than the Mad Titan. And while it may seem like a stretch to posture John de Lancie’s classic Trek antagonist against Josh Brolin’s Thanos, there are big reasons to consider the connection — chief among them, this: Q (and perhaps some other special guests) is returning to Trek canon, which means an Avengers: Endgame-level crossover event could be on the horizon for the Final Frontier.

The teaser trailer for Picard Season 2 has a lot of Easter eggs, and those eggs combined with the confirmation of Q’s return and certain comments from Patrick Stewart, really hint at the possibility of time travel. But there's another layer that many of us missed the first time around.

In “The Reckoning,” Captain Sisko smashed the tablet, which released spirits of a Prophet and Pa-Wraith — basically the good and evil “gods” of the Bajoran people. In reality, the Prophets and the Pa-Wraiths are just super-ancient non-corporeal aliens, who exist in a state of timelessness. In the very first Deep Space Nine episode ever, “The Emissary,” Sisko had to explain the concept of linear time to the Prophets.

If Jean-Luc is messing around with time travel, then it’s reasonable he might be interested in contacting the Prophets. Could this lead to the return of Captain Sisko? Could Star Trek: Picard Season 2 set up a hypothetical Star Trek: Sisko?

In the Picard timeline of 2399 - 2400, Captain Benjamin Sisko has been living with the space god Prophets since 2375. In “What We Leave Behind,” Sisko promised that he would return someday, so maybe if Picard is trying to summon some time travel powers via the Prophets, Sisko could appear and have something to say about all that.

On top of that, because Q is returning, you could argue that Sisko is on a similar power level as Q, because he’s technically a human descended from a space god. (Sisko’s mom was possessed by a prophet before giving birth.) Now, Avery Brooks has not been confirmed to return as Sisko, but it is very strange that Sisko’s reckoning tablet is in the Picard trailer. If Q is back and literally is putting humanity on trial again, Picard might need some backup from somebody who literally lives with Space Gods.

Sure, the show is called Picard, but what if this is just sowing the seeds for a major crossover?

For what it’s worth, a 2014 IDW comic book series called “The Q Gambit” deals with Q bringing the Kelvin-universe USS Enterprise to an alternate future of the DS9 timeline. In the end, Q ends up possessed with the spirit of a Pa-Wraith, and even haunts Jean-Luc in the coda of the comic, showing off his double space god powers.

These comics aren’t canon, of course, but IDW Publishing does work closely with the folks writing the shows, so you never know. Aspects of this Q storyline — featuring DS9 space gods — are pretty easy to revisit. You’ve already got Q and the reckoning tablet literally on the table.

Beyond the shows, there’s the Star Trek universe’s feature film future to consider.

Recently, it was announced that a new Star Trek movie (the first one since 2016’s Star Trek Beyond) will hit theaters sometime in 2023. As of this writing, there is zero information about this movie, other than it will exist. It seems likely this is the same feature film that will be penned by Discovery writer Kalinda Vazquez, although that hasn’t been confirmed, nor has the director. Since the release of Beyond in 2016, there have been several false starts relative to new Trek films, so at this point, anything is possible.

Here’s where we’re at: The Picard Season 2 trailer has confirmed John de Lancie is back as Q, and that reckoning tablet Easter egg could suggest the Prophets from Deep Space Nine are back, too. On top of that, Discovery Season 3 just reintroduced the Guardian of Forever to the Trek canon; a sentient space/time portal, who now has the ability to send people into various timelines, as well as alternate dimensions.

Even though the USS Discovery rode from 2258 to 3188 via a wormhole created by Time Crystals, it seems super-easy now for anyone from that series to interact with characters in Picard or the upcoming Strange New Worlds. Q is the easiest candidate to facilitate a Thanos-style time travel event, but Discovery also has Carl, the Guardian of Forever. Finally, Discovery Season 3 totally had David Cronenberg’s mysterious Kovich outright acknowledge that the Prime Universe knows about the Kelvin Universe.

If Star Trek Universe is planning a larger crossover that spans the 23rd, 25th, and 32nd centuries, then, all the ways to make that crossover are currently back in play — hence, Star Trek hitting its Endgame moment.

With Q back on the scene, it now seems almost more unlikely that a crossover won’t occur, than the idea that one will. Since 2009, Star Trek has been operating with a split canon. But thanks to the return of Q (and maybe some other space gods) all of that could change in the next couple of years, and possibly, culminate in a Star Trek movie unlike anything we’ve ever seen.