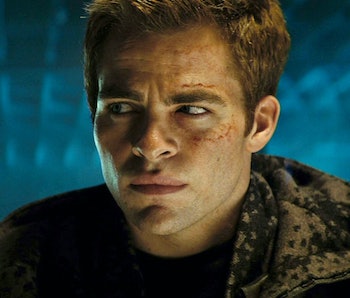 Turns out, crossing parallel dimensions is fatal. What's more, there are a lot more rules about time travel and dimension-crossing in Star Trek than we knew. A pivotal scene sets the stage for a very big twist in the life of Philippa Georgiou (Michelle Yeoh), and also marks the first time a Trek TV series has acknowledged that people in the Prime Universe are aware the Kelvin Universe exists.

Here's how Discovery's latest nod to the reboot Kelvin Universe impacts Trek canon, and why what's going on with Georgiou in "Terra Firma" secretly explains what happened to Old Spock in Star Trek Beyond.

Spoilers ahead for Star Trek: Discovery Season 3, through episode 9.

3. "The Next Generation" of the Kelvin timeline

At the very beginning of "Terra Firma Part 1," Kovich tells Culber about a Betelgeusian "time agent" named Yor, who "traveled forward from 2379 and across from a parallel universe caused by the incursion of a Romulan mining ship."

To put that in simpler terms, Yor was from the future of the Kelvin reboot movies, a version of 2379 that will exist in Chris Pine's version of The Next Generation era. In the Prime Universe timeline, 2379 is the year Data dies in Nemesis, the year before Lower Decks, and a time period in Starfleet history where everyone wears the grey-shouldered, mostly black uniforms that debuted in First Contact. However, in the Kelvin version of 2379, it looks like Starfleet will still be rocking the early TNG style jumpsuits, but paired with the 2370s combadge.

In other words, if you thought Yor's uniform contained anachronistic "mistakes" — the wrong era combadge with an "earlier" Starfleet uniform — these aren't mistakes. This is a small preview of what 2379 looks like in the timeline that takes place after Star Trek Beyond. Kovich says Yor crossed over from "a parallel universe caused by the incursion of a Romulan mining ship," which directly references the beginning of Star Trek 2009 when Nero's mining ship the Narada destroys the USS Kelvin and creates that universe. Does the appearance of Yor in a TNG-ish uniform imply the existence of a Kelvin-era Jean-Luc Picard, a Kelvin-era Captain Sisko, and even a Kelvin-universe version of Cleveland Booker? It certainly does!

2. Why Spock died in Star Trek Beyond

Early in Star Trek Beyond, Spock (Zachary Quinto) is given the news that Spock Prime (Leonard Nimoy) has died on New Vulcan. In real life, this marked an onscreen acknowledgment that Nimoy himself had passed away in 2014, and served to explain why Kelvin Spock would no longer be calling Prime Spock up for advice. In the context of the reboot movies, Old Spock was not only a time traveler from the future – specifically 2387 — but also, across dimensions. This means that Old Spock had the same problem as Yor, but reversed. Spock went back in time, and across from the Prime Universe and into the Kelvin Universe.

In Discovery, Kovich says that this specific combination is fatal and that before Georgiou, they didn't know about anybody who traveled through time and across dimensions before. This implies heavily that even though the Federation in the Prime Universe becomes aware of the Kevlin Universe at some point, they still have no idea that Spock ended up there. But, because the viewer knows all of this, we can now explain why Spock Prime died, possibly prematurely, in the Kelvin Universe: Crossing time and dimensions can kill you, which is almost what happens to Georgiou.

Okay, so in the same episode in which Kovich says that moving between dimensions is outlawed by the "iron-clad" Temporal Accords, we also see Georgiou travel back to the Mirror Universe and, apparently, back in time to a period of time before the Mirror Universe episodes of Star Trek: Discovery Season 1. In theory, this should cure her temporal sickness, since she's back to the universe she came from. But, because Georgiou also seems to be changing the timeline of this universe. For example, she's killed Mirror Stamets, who died in a different way before. And, she's seemingly trying to undo the coup that forced her out of the Mirror Universe in the first place. So, has Georgiou created her own temporal incursion in the Mirror Universe?

Obviously, we'll have to wait until "Terra Firma Part 2" to really get the answer to those questions, but the bigger implication here for the rest of Trek canon is that there are now two reasons why extended crossovers from different dimensions can't happen very for very long. First, it can literally kill the people crossing over, and second, it's straight-up illegal.

But, as this episode of Discovery — and the legacy of Trek demonstrates — when it comes to hopping dimensions or traveling through time, rules are meant to be broken.

Star Trek: Discovery Season 3 is streaming on CBS All Access.