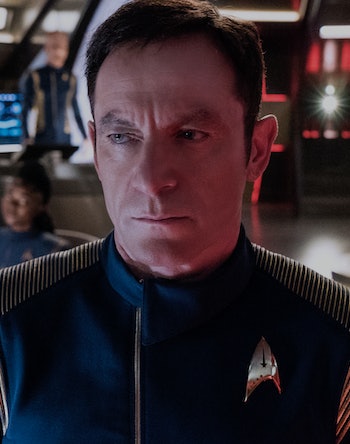 When asked how he feels about being part of the huge legacy of Star Trek, Jason Isaacs rapidly quips “Not anymore!” The 13th episode of Star Trek: Discovery that aired on Sunday seals the fate of his character, Gabriel Lorca. The actor tells Inverse that he’s “relieved” that his Star Trek journey is over, despite good memories of the cast and crew. Now, Isaacs says he can finally tell the truth as to why he took the role of Captain Lorca.

Spoilers ahead for Star Trek: Discovery episode 13, “What’s Past is Prologue.”

“I wouldn’t have said to yes to just ‘being a Captain’ in the abstract,” Isaacs says confidently. “I also knew it wasn’t going to be like any Star Trek captain that had come before. I knew the whole story. It gave me something juicy and fun and very secretive to play with. I feel an enormous relief now that I don’t have to lie anymore. Not just to journalists and the public, which is horrible, but also to my friends, my family, everybody. Only my closest circle knew I was going to die and it was going to be over and that I was from the Mirror World. I felt like the shackles are off now.”

The secret Captain Lorca has been harboring since his first appearance in the third episode of Discovery was finally revealed in the twelfth: he’s not Lorca from the Prime Universe, but instead, a villainous version of Lorca from the infamous Mirror Universe. Since being stranded in the positive, upbeat Star Trek realm, Lorca has been plotting to get back to his own dimension and retake the Terran Empire from Emperor Georgiou (Michelle Yeoh.) Though none of this was broadcast to the audience ahead of time, Isaacs thinks this will make the second viewing even better.

“When people rewatch it, they will see it was crystal clear that I was clearly not Prime Lorca and that I had a different set of intentions and motivations,” Isaacs says. “But the joy of it was playing it close enough to my chest that it’s only apparent on the second time through and not the first time through.”

This kind of retroactive understanding works in the real world, too. In a September 2017 interview with Entertainment Weekly, Isaacs said the role of Lorca “…fell somewhere in the wheelhouse of what I’m used to — which is pretending to be people who have secrets and have stuff they care about.” That secretive wheelhouse includes playing Lucius Malfoy in the Harry Potter films, providing the voice for the evil Inquisitor in Star Wars Rebels, and creeping everyone out as Dr. Hap Percy in The OA. So, combined with Lorca’s behavior on the show, and Isaac’s comments early on, some fans pegged Lorca as being from the Mirror Universe long ago. In October, Star Trek fans on Facebook even suggested a drinking game in which you “chug an Irish car bomb without any spillage” anytime there’s a clue about Lorca being “a Mirror Universe refugee.”

Still, despite the inherent goofiness of the original Trek’s Mirror Universe, Isaacs doesn’t think this figuratively and literally darker alternate dimension is really that far-fetched.

“My understanding of the Mirror World is that it’s not that different from our world. People make slightly different political and racial decisions. It’s not the one-dimensional gotaeed knife-bearing lunatic of the Mirror World of old,” Isaacs explains. “This is a world where some people believe in racial purity and are against immigration, and they think it’s okay to lie to get what you want, and that in the end the weak should be treated harshly. Sadly, those views are prevalent in the world today, and in fact there are people in seats of power who espouse those views every day. It’s not a coincidence that I was sort of encouraging my followers to make the Empire Great Again.”

“It’s not a coincidence that I was sort of encouraging my followers to make the Empire Great Again.”

Because he describes the profession of acting as “basically self-serving,” Isaacs tends to takes on roles that mean something to him. And after those roles are over, he moves on. “I’m an actor. I get to put on funny costumes, pretend to be other people. I make friends. And I have lovely time with people. On Star Trek it was amazing experience socially, and I’ll miss all of them. But, you know, the theme parks, and the happy meals and the t-shirts have nothing to do with my life.”

If one were to takes quotes from Isaacs out of context, it might sound like he’s flippant toward the giant fandoms of Star Trek, or Harry Potter. In November, Isaacs was briefly blocked by on Twitter by Trek legend William Shatner, presumably because Isaacs was opposed to any stunt-casting in Discovery. “If you have stunt celebrity cameo casting, it completely pulls them out of it. They feel like they’re watching a Saturday Night Live sketch,” he said in in late 2017. But, this is also the same guy who told bigoted fans to “fuck off” when racists criticized the casting of Michelle Yeoh and Sonequa Martin-Green in Discovery. And, when he reflects on what big fandoms means to people, Isaacs is beyond generous, he’s actually philosophical.

“Star Trek and Harry Potter have meant so much to so many people,” Isaacs says. “They bring so much pleasure and solace to people. And often when people are in very dark times, these stories help them. It’s a privilege to be around any of that stuff.”

And Isaacs doesn’t just talk the fan community talk. Though it’s not well-known, Isaacs actually lent his voice to a Star Trek fan film. In the final 2017 episode of the fan-created retro-series Star Trek Continues, Isaacs was the the voice of “Esper” though he was cheekily credited as “Jason Lorca,” a portmanteau of his real name, and his Discovery counterpart. “Jason is a great friend and a fan of our show,” Star Trek Continues producer Vic Mignogna tells Inverse. In addition to directing several episodes of the now-completed fan series, Mignogna also plays a pretty convincing version of William Shatner’s Captain Kirk. “When I asked Jason asked if he would record a line for our final episode he graciously agreed.”

“It’s very disturbing to see a Kremlin statement that has my name in it. It’s like holy shit, does Vladimir Putin know my name?”

In the latest Discovery episode, after an epic hand-to-hand fight with both Georgiou and Burnham, Lorca is stabbed through the chest with a giant sword, and thrown into space where we see his entire body disintegrate. Clearly, he’s not coming back, and Isaacs heavily implies we’ll never see Prime Lorca either. So, because Isaacs is a pretty great guy who understands the Trek fandom,and played a deliciously complex character on Star Trek: Discovery, why was now the right time for Lorca’s death?

“Right at the end, Lorca’s fatal flaw ultimately, was that he wouldn’t kill Burnham. He kept trying to grab her hands, and not fight her. Because he thought maybe he could still persuade her. He’s confused Prime Burnham with Mirror Burnham, who was, his lover. He thought maybe he could convince her to say, and rule this place with him. And that was his downfall. And I quite liked that in the choreography of the fight,” Isaacs explained. “Why this episode? I have no idea. I’m not sure how much longer we could have stretched it out.”

But, now that he’s free of the Mirror Universe of Star Trek, phasers and giant swords are the least of Isaac’s worries. His final Discovery episode has aired the same week the actor’s latest film — The Death of Stalin — was banned by the Kremlin in Russia. So, in addition to thinking about his actions in a science fiction parallel world, Isaacs is also slightly concerned about causing an international incident in a film that is basically a comedy.

“My daily life is what am I going to do next, and what time am I picking my kids up from school. And today, it’s how do I avoid Putin’s henchmen. It’s very disturbing to see a Kremlin statement that has my name in it. It’s like holy shit, does Vladimir Putin know my name?”

Star Trek: Discovery airs the final two episodes of its first season over the next two Sundays at 8:30 pm eastern time on CBS All-Access. At this time, Lorca is not expected to appear in either. Isaacs will star in the second season of The OA on Netflix, which he believes will air in December 2018.

The Death of Stalin, directed by Armando Iannucci, and starring Isaacs is set for wide release in the US on March 9, 2018.