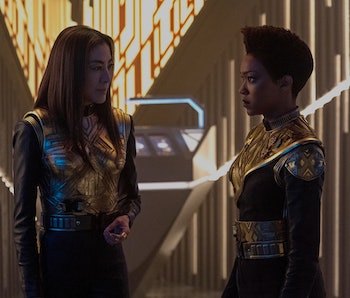 Sunday’s episode of Star Trek: Discovery, “Vaulting Ambition,” adds a biological wrinkle to the humans of the Terran Empire in the alternate dimension known as the Mirror Universe. Turns out all their eyes are extremely sensitive to light, which could totally explain why everybody is such a jerk. It’s not that these people are surrounded by an evil universe, it’s that their intrinsic photophobia means everyone is clinically depressed.

In the climactic twist of the episode, Emperor Georgiou (Michelle Yeoh) explains to Michael Burnham (Sonequea Martin-Green) that being “sensitive to light” is the “the single biological difference between our two races.” So, every human in the Mirror Universe has photophobia, a condition that in the real world, is rarely a genetic one.

If we take it as a given that in this universe everyone does have it, then it explains their aggressive and distrustful behavior. That’s because contemporary studies have linked light sensitivity with depression and other emotional disorders. In 2017, The Journal of Headaches and Pain published a study titled “Psychiatric comorbidities and photophobia in patients with migraine.” The thinking goes like this: people with photophobia tend to avoid being triggered by bright lights, which can create social isolation. Photophobia is also linked with migraines, which is commonly connected to depression.

To be clear, regular people in real life with photophobia are not like people in the Mirror Universe. Just because you have a friend who is sensitive to light, or depressed, you shouldn’t start assuming they are trying to betray you or blow up a planet. In fact, some research suggests that depression is more likely to cause self-harm than violence towards others. Still, it’s hard to imagine that an entire version of the human race who are having migraines constantly wouldn’t create a lot more conflict than what we’re used to.

Existing Star Trek canon has the divergence between the “good” universe and the Mirror Universe at some point in the distant past. Though now, it seems like that divergence is connected to evolution. Notably, having Nethanderal genes in your DNA can predispose someone to depression and isolation, too. Could the Terrans of the Mirror Universe just have a ton more Nethanderal DNA than we do? Like Captain Lorca, the Nethanderals had a tough time with sunlight, too.

In the 2005 Enterprise episode “In a Mirror, Darkly,” it’s suggested that all the works of art and literature in the Mirror Universe are slightly more cynical than they are in our world. In the new episode, Emperor Georgiou says that the concepts of “equality, freedom, cooperation” were “delusions Terrans shed millennia ago.” So, a distrustful, angry human planet has existed for quite a long time in the Mirror Universe. Hardcore Trekkies will be quick to point out that this light sensitivity thing is new to the canon and that no one in 1967’s “Mirror, Mirror,” seemed to be bothered by bright lights. Still, this retcon makes a lot of sense.

Because if everyone is often getting migraines caused by their light sensitivity, it makes sense they’re all depressed and are compensating by being really aggressive. In “Despite Yourself” Burnham says the aggressive strength of the evil humans in the Mirror Universe is “painted rust. It’s a facade.” Which is probably true. For generations, these humans have been wincing at the light, meaning they’re sick and tired of playing nice.

More like this
Science
Jan. 29, 2023
Studying ancient human DNA has unlocked our origins — but the ethics are hazy
By Emiliano Rodríguez Mega and Knowable Magazine
Science
Jan. 22, 2023
Infection expert answers 7 top questions about Covid-19’s “Kraken” subvariant
By The Conversation and Sameer Elsayed
Science
Jan. 28, 2023
How does the placebo effect take hold? A doctor explains two influential factors
By Kathryn T. Hall. and The Reader
LEARN SOMETHING NEW EVERY DAY.
Share: