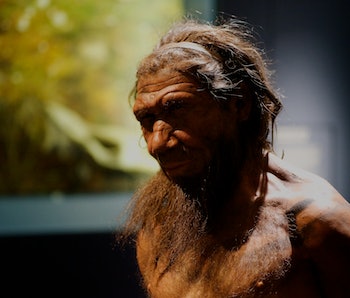 About 50,000 years ago, a group of early Homo sapiens traveled from Africa to Europe, encountered Neanderthals, and boned them. The consequences of this primordial coitus are evident in some humans today: Between one and five percent of modern European and Asian genomes are estimated to contain Neanderthal DNA.

In an attempt to figure out exactly how that ancient DNA affects us, German scientists recently discovered that we can blame the lonely, ancient species for a lot of common traits — and some undesirable ones.

Publishing their study in the American Journal of Human Genetics on Thursday, the Max Planck Institute scientists report that Neanderthal DNA strongly influences the biology of our skin and hair color and present further evidence that this DNA influences our moods — and, oddly, our penchant for cigarettes.

Why Neanderthal genetic material manifests in these results isn’t exactly known, but scientists believe that it could be because of Neanderthal’s limited exposure to sunlight in Europe during the 200,000 years before they encountered early humans.

Neanderthal genes are quite rare, so to study their effects in humans, the scientists had to pull huge amounts of data from the UK Biobank, which holds genetic information pulled from the blood, urine, and saliva of thousands of people. Studying the genomes and phenotypes (how genes manifest in a person) of 112,000 participants, they discovered that multiple different Neanderthal alleles were associated with various dark and light shades of skin and hair. This suggests that Neanderthals likely had different hair and skin tones, just like modern humans do today. (The one exception is gingers — they seem to be strictly Homo sapiens.)

Their analysis also showed that Neanderthal alleles were more frequently linked to behavioral phenotypes than human alleles — especially behaviors that we don’t consider particularly positive. The Neanderthal alleles, they write, are significantly associated with “loneliness of isolation, frequency of unenthusiasm or disinterest in the last two weeks, and smoking status.” The discovery of these associations overlaps with what previous studies have found: Neanderthal DNA means you’re more likely to become addicted to nicotine and increases your chance of developing depression.

The connection here, however, is not definite: In an interview with the New York Times in January, Vanderbilt University evolutionary genomics professor John Capra said that “roughly one to two percent of one’s risk is determined by Neanderthal DNA.”

Scientists aren’t sure what environmental pressures caused Neanderthal populations to retain certain genes and get rid of others, but they speculate that it has something to do with the fact that they had limited exposure to sunlight in Europe in the 200,000 years before they encountered early humans. It’s difficult to say, now, whether any of their genetic material gives us any semblance of a leg up today. But there is a silver lining to our ancient inheritance and the emotional weight it can bear: You can blame your moodiness on your Neanderthal ancestors.

If you liked this article, check out this video on how evolution is making genes linked to intelligence more scarce.