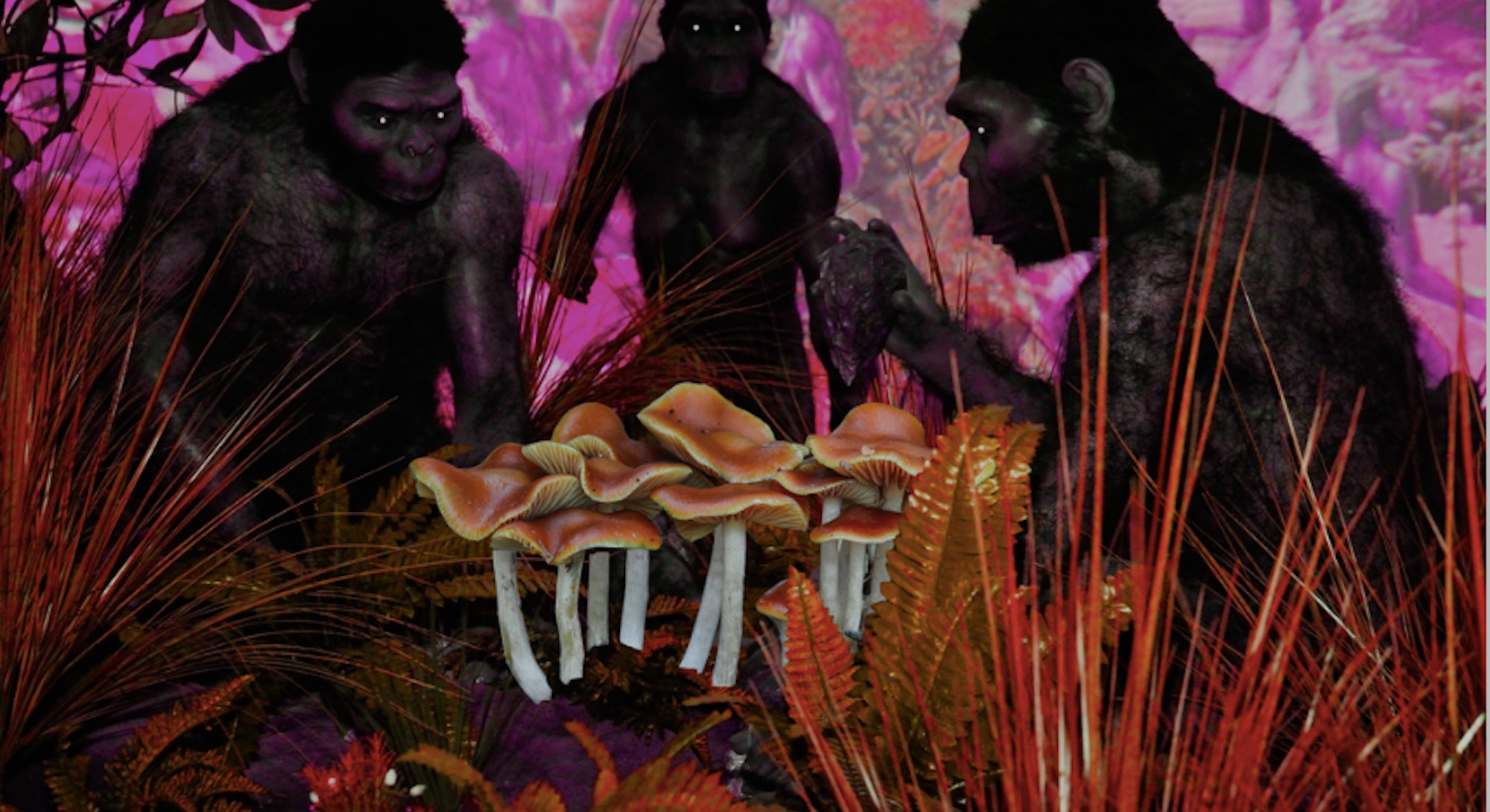 Imagine Homo erectus, a now-extinct species of hominids that stood upright and became the first of our ancestors to move beyond a single continent. Around two million years ago, these hominids, some of whom eventually evolved into Homo sapiens, began to expand their range beyond Africa, moving into Asia and Europe. Along the way, they tracked animals, encountered dung, and discovered new plants.

But that’s just the version of our origin story that happens to be widely accepted by scientists.

A more radical interpretation of these events involves the same animals, dung, and plants but also includes psychedelic drugs. In 1992, ethnobotanist and psychedelics advocate Terence McKenna argued in the book Food of the Gods that what enabled Homo erectus to evolve into Homo sapiens was its encounter with magic mushrooms and psilocybin, the psychedelic compound within them, on that evolutionary journey. He called this the Stoned Ape Hypothesis.

McKenna posited that psilocybin caused the primitive brain’s information-processing capabilities to rapidly reorganize, which in turn kick-started the rapid evolution of cognition that led to the early art, language, and technology written in Homo sapiens’ archeological record. As early humans, he said we “ate our way to higher consciousness” by consuming these mushrooms, which, he hypothesized, grew out of animal manure. Psilocybin, he said, brought us “out of the animal mind and into the world of articulated speech and imagination.”

As human cultural evolution led to the domestication of wild cattle, humans began to spend a lot more time around cattle dung, McKenna explained. And, because psilocybin mushrooms commonly grow in cow droppings, “the human-mushroom interspecies codependency was enhanced and deepened. It was at this time that religious ritual, calendar making, and natural magic came into their own.”

McKenna, who died in 2000, passionately believed in his hypothesis, but it was never seriously considered by the scientific community during his lifetime. Dismissed as excessively speculative, McKenna’s hypothesis now only pops up occasionally in online message boards and Reddit pages dedicated to psychedelics.

However, a talk in April at Psychedelic Science 2017, a scientific conference on psychedelics attended by researchers, therapists, and artists who believe in the therapeutic potential of these drugs, renewed interest in the theory. There, Paul Stamets, D.Sc., a noted psilocybin mycologist, advocated for the Stoned Ape Hypothesis in his talk, “Psilocybin Mushrooms and the Mycology of Consciousness.”

“I present this to you because I want to bring back the concept of the Stoned Ape Hypothesis,” Stamets said to the crowd. “What is really important for you to understand is that there was a sudden doubling of the human brain 200,000 years ago. From an evolutionary point of view, that’s an extraordinary expansion. And there is no explanation for this sudden increase in the human brain.”

The “doubling” he talked about refers to the sudden growth in the size of the human brain, and he’s right: The details are still up for debate. Some anthropologists believe that the brain size of Homo erectus doubled between 2 million and 700,000 years ago. Meanwhile, it’s estimated that the brain volume in Homo sapiens grew three times larger between 500,000 and 100,000 years ago.

Laying out the tenets of the Stoned Ape hypothesis that McKenna and his brother Dennis shaped, Stamets painted a portrait of primates descending from African canopies, traveling across the savannahs, and coming across “the largest psilocybin mushroom in the world growing bodaciously out of dung of the animals.”

“I suggest to you that Dennis and Terence were right on,” Stamets announced while acknowledging that the hypothesis was perhaps still unprovable. “I want you or anyone listening, or seeing this, to suspend your disbelief … I think this is a very, very plausible hypothesis for the sudden evolution of Homo sapiens from our primate relatives.”

The crowd broke out into wild applause.

Is it finally time to take the Stoned Ape hypothesis seriously? Doing so requires integrating our advancements in scientific research on psilocybin, recent archeological discoveries, and our murky understanding of human consciousness and fitting these into our current understanding of human evolution. We can start with the common threads between McKenna’s view of the development of consciousness and other, more mainstream, theories, including the commonly accepted view that it emerged over thousands of years and that language played a central part in its evolution.

“I think that, like anything, there’s possibly some truth in what he [McKenna] says,” paleontologist Martin Lockley, Ph.D., tells Inverse. Lockley, the author of a book called How Humanity Came Into Being, has one major issue with McKenna’s reasoning: Believing in the Stoned Ape hypothesis, which posits that our ancestors got high and consequently became conscious, also means agreeing that there was a singular cause for the emergence of consciousness. Most scientists, Lockley included, think it was much less straightforward than that.

Consciousness, after all, is a very complex thing that we are only beginning to understand. Anthropologists generally accept that it’s a function of the human mind involved with receiving and processing information that evolved over millennia of natural selection. A state of consciousness comprises an awareness of multiple qualitative experiences: sensations and feelings, the nuances of sensory qualities, and cognitive processes, like evaluative thinking and memory. In 2016, scientists pinpointed where all of this lives in the brain, discovering a physical link between the brain regions associated with arousal and awareness.

McKenna’s theory chalks up the entirety of this complicated phenomenon to a single spark; to him, psilocybin mushrooms were the “evolutionary catalyst” that sparked consciousness by prompting early humans to engage in experiences like sex, community bonding, and spirituality. Most scientists would argue that McKenna’s explanation is excessively, and perhaps naively, simplistic.

And yet, they’re equally stumped when asked to answer the question at the root of the debate over the Stoned Ape hypothesis and consciousness research in general: How did consciousness evolve? If it wasn’t psychedelic mushrooms that started the process, then what did? Michael Graziano, Ph.D., a professor of psychology and neuroscience at Princeton University who studies consciousness, had not heard of the Stoned Ape theory but concurs that the evolution of human consciousness is somehow linked to the formation of communities. In his own theory, he argues that brains had to develop the ability to understand subjective experiences to serve social needs. Since it was evolutionarily beneficial to be socially intelligent, he says, it’s reasonable to believe that consciousness evolved as a survival tactic.

“It is possible that consciousness emerged partly to monitor, understand, and predict other creatures, and then we turned the same skill inward, monitoring and modeling ourselves,” Graziano tells Inverse. “Or it could be that consciousness emerged much earlier, when basic attentional focus first emerged, and that it is related to the ability to focus the brain’s resources on a limited number of signals. That would put it very early in evolution, perhaps half a billion years ago.”

Likewise, the theories of anthropologist Ian Tattersall, Ph.D., have nothing to do with psychedelic drugs but share the Stoned Ape’s emphasis on socialization. In his 2004 paper “What happened in the origin of human consciousness?” Tattersall, a researcher at the American Museum of Natural History, argued that self-awareness — and thus consciousness — was born as early man learned to consider itself apart from nature and grew capable of evaluating and expressing the thoughts within its mind. Language developed shortly after, followed by modern human cognition.

Where Tattersall remains stumped — and where McKenna’s theory offers some explanation — is in trying to figure out when that crucial transition took place.

“Where did modern human cognition emerge?” Tattersall writes. “Almost certainly in Africa, like modern human anatomy. For it is in this continent that we find the first glimmerings of ‘modern behaviors’ … But the moment of transformation still eludes us and may well do so almost indefinitely.”

McKenna might have argued that psilocybin-containing mushrooms caused this “moment of transformation.” But even experts on ancient drug users think it’s unlikely that a single factor caused such a radical change, despite it being entirely reasonable to think that early hominids munched on magic mushrooms as they made their way through Africa.

“Human evolution is a tremendously intricate process in which several factors have played their part,” archeologist Elisa Guerra-Doce, Ph.D., tells Inverse. Guerra-Doce’s research on the use of drug plants in prehistoric times has detailed how early humans used mind-altering drugs for ritual and spiritual purposes. But despite the fact that she’s encountered remnants of opium poppy in the teeth of Neolithic specimens, ancient charred cannabis seeds, and even abstract drawings of the use of hallucinogenic mushrooms on cave walls in the Italian Alps, she is not on board with the Stoned Ape hypothesis.

“From my point of view, McKenna’s hypothesis is too simplistic and lacks direct evidence to support it — that is, any evidence of consumption of hallucinogenic mushrooms by the earliest Homo sapiens,” she says, pointing out that he got some of his basic facts wrong. “He points to the Algerian paintings of Tassili-n-Ajjer, which include some depictions of mushrooms, but we must bear in mind that these paintings date back to the Neolithic.”

If the science behind McKenna’s hypothesis is unstable, what worth does it have in the search for the origin of human consciousness?

At its best, the Stoned Ape hypothesis is, as Stamets described it, an “unprovable hypothesis” that fits some – but not nearly all – of the knowledge we have about the evolution of consciousness. At its worst, it’s a gross oversimplification of the multitude of factors that may have jump-started modern human cognition and consciousness. However, McKenna deserves credit for sparking an idea in the 1990s that scientists have only recently been able to prove: Psilocybin does alter consciousness and can trigger physical changes in the brain.

In recent years, drug researchers have determined that psilocybin induces a state of “unconstrained cognition,” triggering a pronounced surge in activity in the primitive brain network, the region associated with emotional reactions. On psilocybin, the parts of the brain linked to emotions and memory become more coordinated, creating brain activity patterns resembling those of people who are asleep and dreaming. At the same time, the region that controls higher-level thinking and is linked to a sense of self becomes disorganized, which is why some people who take psilocybin feel a loss of “ego,” leading them to feel more a part of the world than they do their own bodies.

Regardless of the holes that have been pointed out in McKenna’s scientific logic, Amanda Feilding, founder and director of the Beckley Foundation, a leading psychedelic research think tank, tells Inverse that we must see past McKenna’s errors and consider his greatest insight: that the story of humankind is inseparable from our fascination with psychedelic drugs. Even if early man encountered psychoactive substances closer to the Neolithic period, she says, the experience of entering an altered state of consciousness likely changed human society for the better.

“The imagery that comes with the psychedelic experience is a theme that runs through ancient art, so I’m sure that psychedelic experience and other techniques, like dancing and music, were used by our early ancestors to enhance consciousness, which then facilitated spirituality, art, and medicine,” she says.

The Stoned Ape hypothesis may now be lost to the annals of fringe science, but some remnant of its legacy remains. Now that scientists better understand the way psilocybin physically affects the brain, they can seriously investigate its potential to treat disorders like substance abuse, anxiety, and depression. If that happens — and it looks like it will — psilocybin will become a part of mainstream culture as an agent of positive change. And isn’t that ultimately what McKenna was advocating for?

Maybe we’ll never know how magic mushrooms helped early humans. But there’s no doubt they’ll be contributing to the wellness of modern humans as we continue down our strange evolutionary path.