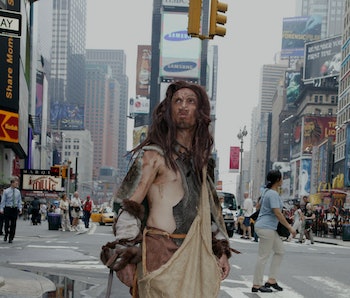 Our current understanding of Neanderthals, the species with which we used to share the genus homo, is that they were very intelligent. This understanding comes from fossilized evidence that they had larger brains than modern Homo sapiens — that would be us — possess. There is also archeological evidence that Homo neanderthalensis taught early humans how to use tools. So, a small-brained human can be forgiven for wondering, why did Neanderthals go extinct while their weird little evolutionary cousins survived? Scientists don’t have a definitive answer to this riddle yet, but the newest theories are fascinating.

For starters, Neanderthals were loners. As Yuval Noah Harari has memorably pointed out, a human is absolutely no match for a chimp, but 1,000 humans could easily beat 1,000 chimps. This is because chimps don’t instinctively form large, organized groups and humans do. Neanderthals gave off more of a chimp social vibe, forming small, usually familial groups. Humans formed villages. This allowed humans to engage in specialized labor on a much larger scale than Neanderthals. Some humans tended crops, some humans raised children, some humans formed raiding parties, and some humans hunted. Neanderthals just neandered around. And they were in danger when they did. There is fossil evidence of humans killing and eating Neanderthals like animals. Although this has been contested as a primary cause for the extinction of Neanderthals (largely because we haven’t pinned down the timing of human migrations ), this probably didn’t up the survival rate of the species.

Neanderthals also appear to have had an interesting mating situation. It’s thought that Neanderthal females would travel from group to group and mate, while the males and children would usually stay rooted in one location. After the ice ages, the groups became more and more dispersed, as some groups didn’t survive. This made journeys even harder on the females and further reduced the chances of survival, and, probably more significantly, reduced their genetic diversity. Recent genomic studies have indicated the veracity of the latter conjecture, showing that the parents of a sequenced specimen were probably half siblings, and that “inbreeding was typical among the individual’s recent ancestors.” Inbreeding at such a high rate can make a species very delicate and prone to succumb to any one of a number of threats.

Another possibility is that Neanderthals didn’t go extinct. Instead, they were absorbed into the human lineage. You’ve probably already heard that between 1.5 to 2.1 percent of the DNA in humans outside of Africa comes from Neanderthals, but recent revisions to the human/Neanderthal mating timeline suggest this interbreeding was going on a lot longer than previously thought. Rather than being eliminated, we may have just merged.

There are other, non-mainstream ideas worth considering, too. Maybe the Neanderthals were too smart, for example, and unable to contend with the challenges of having such a powerful brain. Neanderthal DNA is linked to a risk of depression in modern humans, as well as a susceptibility to nicotine addiction, a well-known indicator of schizophrenia (though this is wild speculation — no clear link exists between Neanderthal gene content and presence of schizophrenic symptoms, to my knowledge). It could very well be the case that when a brain becomes very large, the challenges in controlling that brain become exponentially bigger, because even the smallest variation becomes amplified to enormous degrees. This is not to mention that potentially exaggerated emotions may have become overwhelming to cope with, like the occasional existential malaise.

Whatever the case, humans survived to the present day and Neanderthals did not, indicating, in theory, that we were the more well-adapted species — at least to the ancient world. The mere ~ 195,000 years that our species has existed is a tiny fraction of even the primate lineage, though, so our staying power has yet to be tested. Whether we are also well adapted to a modern, industrially manhandled planet has yet to be seen!