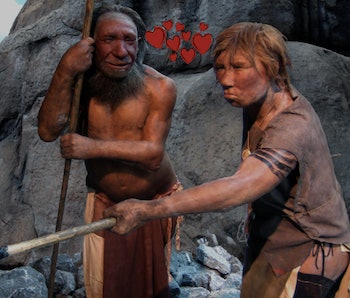 Before they went extinct around 40,000 years ago, Neanderthals interacted with anatomically modern humans across Eurasia and Europe. These humans fought with them, maybe ate them, and definitely had sex with them. Now new research reveals another thing our ancestors likely enjoyed doing with our closest known hominin relative: Make out.

In a paper published Tuesday in Nature, a team of scientists explain that they recently (and successfully) sequenced the long strands of ancient DNA sourced from four Neanderthals. These specimens, aged between 42,000 to 50,000 years old, specifically came from dental plaque samples found in cave sites in Belgium and Spain. Because dental plaque traps microorganisms in the mouth and sometimes even pathogens from the respiratory and gastrointestinal track, sequencing the DNA found in the plaques gave the research team breakthrough insight into what life may have been like for these archaic creatures.

The DNA sequencing revealed details like some Neanderthals in Spain enjoyed eating moss, while one specific Neanderthal self-medicated by chewing on bark containing a chemical related to aspirin. They also drafted a 48,000-year-old microbial genome associated with Menthanobrevibacter oralis. Today, this bacteria is associated with gum disease — and its existence in these dental plaque samples means that humans and Neanderthals might have been playing tonsil hockey long after the two species diverged.

“If you’re swapping spit between species, there’s kissing going on, or at least food sharing, which would suggest that these interactions were much friendlier and much more intimate than anybody ever possibly imagined,” study co-author and paleomicrobiologist Laura Weyrich told Nature.

If the research of Weyrich’s team is correct, then it means that our ancestors either a) liked to kiss Neanderthals or b) liked to share spit-covered food with Neanderthals. Why they would kiss is another question — virtually all other animals mate without kissing, and even among people today, only about 46 percent of human cultures kiss.

The inclination to kiss is still not completely understood, but some researchers, like Sheri Kirshenbaum, the author of The Science of Kissing, believe people kiss to exchange and inspect sensory information and gain insights to the health and vitality of the individual. Others, like anthropologist Shelly Volsche of the University of Nevada, think particular cultures kiss as a way to simply display sexuality or show trust. Regardless, it’s demonstrably true that when lip nerve endings touch, kissers feel good.

Hopefully, for our Neanderthal friends and human ancestors, the spit exchange came from kissing. If not, they were consuming some pretty slobbery grub.