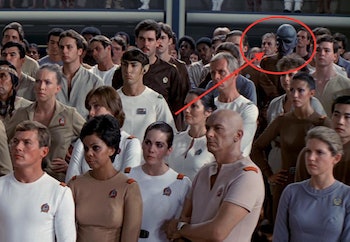 Despite jumping forward beyond any time period where Star Trek has gone before, Discovery Season 3 remains keenly aware of the franchise's roots. In the Season 3 premiere episode – "That Hope Is You, Part 1," Burnham and her new ally Book talk about plenty of things only hardcore fans would truly understand, including the new limitations to space travel.

But the deepest Easter eggs in the Discovery Season 3 premiere weren't about dilithium and warp drives. If you looked closely, there were at least three aliens species that made triumphant comebacks, and two of those were connected to blink-and-you'll-miss-it cameos from old Star Trek movies. That's right, Burnham and Book are living in a brave new century, but some of these aliens are from the '70s, '80s, and '90! Spoilers ahead.

It's pretty fair to say that the original 1977 Star Wars turned the concept of "background aliens" into fine art. Yes, the 1960s Star Trek had some memorable groups of zany aliens eating and drinking together — notably in the episode "Journey To Babel." But it wasn't until the Trek films got going in the late '70s and '80s that barely-glimpsed aliens started to really compete with Star Wars-cantina levels. By the '90s, on Deep Space Nine, Star Trek had easily won the goofy-aliens long-game, simply by virtue that they had more hours than Star Wars and way more aliens.

In fact, one of DS9's greatest regular-background aliens appeared prominently in the latest Discovery episode. Remember the alien with the long face who sat at Quark's Bar and never said a word on DS9? Well, that guys' name is Morn, and he's a Lurian. Though it's been a while since we've seen a live-action Lurian like Morn on-screen (since the '90s!) there was one front-and-center in the posse that was sent to capture Book and Burnham. Check it out!

The alien deep-cuts go even further back into the Trek canon. As pointed out by several fans, including Jörg Hillebrand on Twitter, Discovery also brought back two aliens far more obscure than the Lurians. Two aliens species we meet in the Season 3 premiere are from the Trek movie era, a time when Star Trek was trying to throw as many different weird aliens on screen as possible.

Hillebrand points out that the Trek canon has served up a lot of deep cuts lately, first with Lower Decks and now the latest episode of Discovery. But he's mostly talking about background aliens like the Lurians mentioned above, and also, the mask-wearing Aammazaran — first seen in The Voyage Home (1986) — only glimpsed for a second at the Mercantile in Discovery.

But one of these obscure aliens was actually the primary villain of the episode, and the very first person — other than Book — to appear on-screen in Discovery Season 3. Book and Burnham's nemesis in this episode is a smuggler with the unlikely name of Cosmo Traitt, and his presence is a front-and-center Easter egg that went over pretty much everyone's head.

Cosmo's species appeared briefly in 1979's The Motion Picture. Although some viewers (me) initially thought Cosmo was a Yirdian from The Next Generation, he's actually a Betelgeusian, which was confirmed by the official Star Trek aftershow, The Ready Room. If you're unsure what a Betelgeusian is, you can see one of these aliens in the big Enterprise crew crowd shot in The Motion Picture (1979).

If you want to go even deeper, you can bust out a copy of the Jerry Goldsmith score for Star Trek: The Motion Picture — which I happen to have right here. In it, you will find a fun insert that shows us several types of background '70s Trek aliens, including, a Betelgeusian Ambassador. Retro sensors on full!

Want to know more about Betelgeusians in Star Trek, outside of their appearances in wide crowd shots in the 1979 Trek feature film and sleeves inside of vinyl records from the same year? Tough!

In Trek lore, there is almost nothing else known about Betelgeusians other than this is how they look, and that Cosmo was one of them. According to some apocryphal sources, Betelgeusians evolved from "a race of creatures combining characteristics of eagles and leopards." We also have to assume they come from the star system containing the actual star Betelgeuse. Sadly, because Cosmo was vaporized in the Discovery Season 3 premiere, we're probably not going to be seeing a lot more of him this season, meaning that eagle-meets-leopards evolutionary path has yet to be confirmed on-screen in real canon.

Either way, if you love goofy aliens from deep in Trek's past, based on the appearances of all these other retro aliens in the Discovery Season 3 premiere, it seems like the search to find throwback Trek extraterrestrials is just beginning.

Star Trek: Discovery airs on CBS All Access on Thursdays.