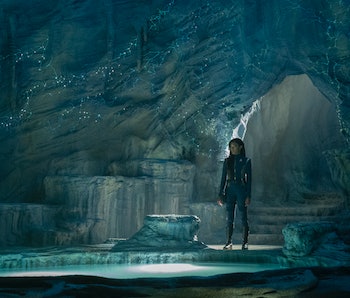 Star Trek: Discovery Season 3 takes place 930 years after Season 2. That means, in theory, the crew shouldn't encounter anyone from Trek canon who wasn't already on the ship or a fellow time-traveler. The year 3187 is so far past most Trek canon, that Discovery Season 3 is essentially a sequel to all of Star Trek up until this point. Everyone involved with the show, including star Sonequa Martin-Green, has pointed out this time-travel jump will give the new season a "clean slate."

Does that we won't see anyone from the expansive Trek universe? Could legacy characters who aren't time travelers or space gods (like "Q") still cross over to the new Discovery? One familiar face from Deep Space Nine could easily return for Discovery Season 3, and there are already clues from the trailers that it will happen.

Based on the 2019 New York Comic-Con trailer for Discovery Season 3, we already know several classic alien races will return this season, like the Andorians and the Trill. The Andorians aren't immortal or long-lived (as far as we know) but the Trill certainly are. In two scenes in the trailer, we clearly see members of the Trill, and we also see Burnham in what appear to be caves on the Trill homeworld. We also see a new character who appears to be floating in the Trill pools.

To refresh your memory, here's the trailer again.

Below are screenshots of the relevant moments.

There are two kinds of Trill — joined and non-joined. The joined Trill carry a symbiont, a worm-like lifeform that is often several centuries old and has a personality that is both independent of the host body, but also, integrated with that person, too. In the Caves of Mak'ala, the worm-like symbionts could live independent of a host-body. These caves are guarded by Trill called the Guardians. The red-robed Trill in the Discovery trailer certainly seem like they are Trill guardians and the milky pool we see also seems like the Caves of Mak'ala.

This means it's likely some kind of Trill symbiont will play a major part in Discovery Season 3. Burnham is searching for answers as to what happened to the Federation and Starfleet in the intervening centuries, and it makes sense to confer with the Trill. The symbionts live for so many lifetimes, so they are the perfect lifeforms to chat with about living history.

In the DS9 episode, "Trials and Tribble-alations," Jadzia Dax said this when she time-traveled from the 24th century back the 23rd century, "I guess the difference between you and me is I remember this time. I lived in this time and it's hard to not want to be part of it again."

Dax could easily return for Discovery Season 3, and also be played by a variety of actors any gender or ethnicity. Any of these new characters — including Cleaveland Booker (David Ajala) — could secretly be Dax! Dax hid her spots on more than one occasion when it was time to go undercover.

On a more serious note, what about that new character floating in the caves? Could Burnham herself be joined with the Dax symbiont? If that happened, then Burnham could briefly become Dax, and if you don't think there's a precedent for that, then go back and watch the very first TNG episode with the Trill. In "The Host," Riker briefly becomes joined with Ambassador Odan, and thus, carries the memories and experience of that Trill.

In Deep Space Nine, we were aware of several Dax hosts. The two most regular Daxes were Jadzia Dax (Terry Farrell) and after Jadzia was killed in "Tears of the Prophets," the symbiont was transferred to Ezri Dax (Nicole de Boer). Prior to Jadzia, there had been at least eight different hosts of Dax, and the symbiont had been alive since the year 2018. This means that Dax had memories that predated human first contact with the Vulcans, but also that Dax was a contemporary of several people during the 23rd Century, including the Klingons Kang, Koloth, and Kor, but also, Dr. "Bones" McCoy. So, if Dax's lives extended that far back in Trek's past, why not the future?

Discovery bringing on a new Dax would be amazing. But, on top of that, it would also be smart. The brilliant thing about Dax is that every time they change hosts, it becomes partially a new character. If Discovery wanted to play one nostalgia card in Season 3, while keeping the rest of the show aimed at unchartered territory into the future, Dax is definitely the way to go.