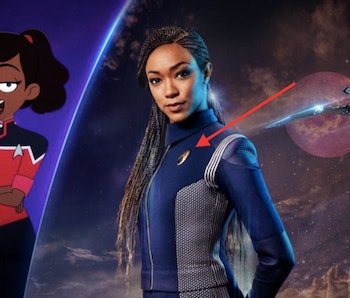 When Star Trek: Discovery jumps into Season 3 on October 15, the show will literally be taking the 23rd Century Starfleet crew into a whole new future.

The new setting for Season 3 is around the year 3187, which is 930 years from where they originated, and in the last two decades of the 32nd century.

Right now, we don't know much about the status of Starfleet or the Federation in this time period, but a new promotional image for Discovery Season 3 may have just given us a hint about what Starfleet looks like in the 32nd century. Literally!

In other words,' what's Michael Burnham wearing on her Starfleet uniform? Is that a new Starfleet badge or what?

This week, CBS All Access released a new image celebrating the impending launch of Lower Decks on August 6, which will be followed by the debut of Discovery Season 3 on October 15. This image featured a new, photo of Sonequa Martin-Green as Michael Burnham, rocking her new much longer hairstyle, which we previously glimpsed in the trailers. (And which may indicate that there's a time jump within this season, too.)

Now, at first glance, you might not notice anything overly new about the image.

Yes, Burnham still is rocking the silver colors which indicate she's still in the science division and, and not command, but if you look closely, you'll see it looks like she's not even wearing the "classic" Starfleet delta insignia from the rest of the DISCO era.

Okay, so the almost totally rounded insignia is not the same style of badge Burnham — or anyone else — has been wearing for the past two seasons. That said, Burnham has worn two different styles of Starfleet badges, the command division badge in the pilot episodes, and then, much later, the science division badge. For most of season 1, Burnham didn't wear a Starfleet badge at all, because at that point, she still hadn't earned back her commission following her mutiny attempt in "The Vulcan Hello."

So, this is actually the third type of badge Burnham as worn in the entire run of Discovery. And, the interesting thing is, it seems to be brand-new. Which leads to a big question: Is this actually a future Starfleet insignia — or is it something else?

Does Starfleet exist in the year 3187?

In the trailer for Discovery Season 3, we see Burnham meet a new character named Booker (David Ajala) and he indicates that Burnham must "believe in ghosts," because of "that badge on your shirt." This scene heavily implies that in the 32nd century, Starfleet does not exist. Elsewhere in that trailer, we saw a flag for the United Federation of Planets, which seems to have way fewer stars on it than it did in the relative "present" of the TOS/DISCO era or the TNG era of the series. So far, the implication is that the Federation is in decline, and Burnham and the crew are trying to get the UFP mojo back.

Starfleet and the Federation are not the same things

The prequel series Enterprise, which took place during the 22nd Century, focused nearly exclusively on a period where Starfleet was simply an Earth-based exploratory organization. Only after the United Federation of Planets was founded in 2161, did Starfleet become a branch of it.

What does all this mean for the "new" badge Burnham is wearing? Maybe nothing, but at the same time, if the Federation is either fractured or non-existent in 3187, then a new version of Starfleet might operate independently of the Federation.

Or, maybe, Burnham and the crew create a new version of Starfleet and this badge represents that rebooted concept.

It's a good bet this new badge is also a communicator

In Burnham's time, Starfleet was still using the classic flip-up, handheld communicators. It wasn't until the time of The Next Generation, that a communicator became the badge everyone wore on their shirts. That said, in Discovery Season 2, we learned that Section 31 had the "com badge" tech as far back as 2257, a fact which scandalized Captain Pike when Ash Tyler tapped his badge to communicate with a Section 31 ship. So, if Burnham is rocking a far-future badge, you can bet that it's got that TNG-style communicator functionality. In fact, it may have even more functionality. Think about it, this is 930 years after Discovery, but this is also 788 years after Picard. What can com badges do now? Are they tricorders also? Could Burnham's new badge also be a personal transporter? A phaser? The idea that the tech has gotten really advanced feels very, very likely.

Though we can't get a great look at the new badge, some fans are doubtlessly wondering if there's any connection to the DS9 com badges worn by members of the Bajoran militia. The fact that the badge seems almost totally oval in shape (and perhaps not the pointed delta we associate with Starfleet) could indicate it's not a Starfleet badge at all.

Could this be a future version of the Bajoran insignia? Could Bajor have formed its own coalition in the far future? In the existing Discovery Season 3 trailers, there are two references to the Trill from Deep Space Nine, which seems to partially open the door to even more DS9 references on the series. Now, Trill and Bajor are totally separate planets, and yet there does seem to be something there that reminds us of DS9.

Because if Starfleet doesn't exist in the 32nd century, then perhaps another group took its place. And it would be amazing if the roots of that "new Starfleet" came from another part of Trek history that everyone loves.