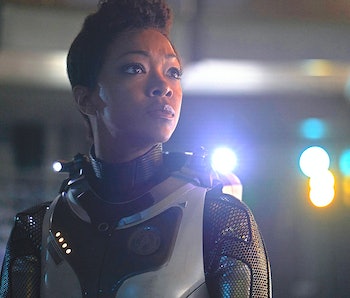 More than any other Star Trek series in a long time, Star Trek: Discovery Season 3 is really poised to go where the franchise has never gone before. After several decades of kicking around in the 22nd, 23rd and 24th centuries, Discovery will take place in the 32nd century. This raises a lot of big questions about the future of Starfleet and the nature of the Federation in this brave new galaxy.

But people love Star Trek because of the characters. Arguably, the crew of Discovery are more interesting, diverse, and complex than any Trek series since Deep Space Nine. With that in mind, here are seven character arcs you might have forgotten about that could be hugely important in Discovery Season 3. Spoilers ahead for Star Trek: Discovery Seasons 1-2.

7. Michael's mom is still out there

The biggest twist in the second half of Discovery Season 2 was that Michael Burham's mother was the mysterious time-traveling "Red Angel." While we later learned that Michael herself also became the Red Angel, the season ended without a clear idea of what happened to Gabrielle. Yes, she was sucked into a time vortex without a suit, but that doesn't mean she died.

Michael's reunion with her biological mother in Season 2 was a big deal, and given that Michael can likely never see her adoptive family again (Sarek, Spock, and Amanda are stuck in the 23rd century) the idea that Discovery's most important character could see her mom again could be a major plot point.

In Season 2's "The Sounds of Thunder," we learned Saru's species hadn't always been docile. Several centuries before the relative "present," the Kelpiens preyed upon another species called the Ba'ul. The Ba'ul eventually figured out a way to repress one part of the Kelpiens' biology; a process called vahar'ai, in which the Kelpiens became strong and lost their famous threat ganglia. In "The Sounds of Thunder," Captain Pike and the crew stimulated vahar'ai for the entire planet, meaning that the Kelpiens were suddenly in a position to no longer be docile. This resulted in Saru becoming far more confident, but it also seemed to have big implications for his home planet.

In the Season 2 finale, several Kelpiens — including Saru's sister Siranna — had apparently appropriated Ba'ul spacecraft for their own uses. So what does the planet Kaminar look like 930 years after that? Did the Kelpiens become violent again? If so, how will Saru deal with the idea that he personally caused that to happen?

5. Stamets, Culber, and the mycelial network

In Season 1 of Discovery, Ash Tyler killed Dr. Culber in the Mirror Universe. In Season 2, thanks to the power of the mycelial network, Culber's body was reconstructed. The thing is, this means both men — Stamets and Culber — have aspects of their DNA that are connected to that network. In Season 1, Stamets injected himself with the mutated tardigrade DNA, which later allowed him to bring Culber back . This means Discovery has two members of the crew who may or may not have a superpower running through their veins.

In the previous two seasons, Statmet's connection to the mycelial network allowed him to interface with the Spore Drive and jump the ship anywhere in space. In Season 1, this also included jumping between different universes and time itself.

Discovery didn't use the Spore Drive to jump into the future in Season 2. That journey happened because of time crystals and wormholes. Still, if Discovery doesn't want to stay in 3187 exactly, it seems possible Cubler and Stamets could figure out how to get DISCO "up and jumping" through the mycelial network again.

Throughout Season 1 and Season 2 of Discovery, there's one thing that everyone keeps forgetting about Sylvia Tilly: She really wants to become a starship captain. In Season 1, still a cadet, Tilly was desperate to get into the Command Training Program. In Season 2, she actually began her command training, and, from what we saw, was pretty good at it! Also of note: In the Mirror Universe, Tilly was the Captain of the I.S.S. Discovery.

What happens to Tilly's dream now? If Starfleet doesn't exist, that captaincy feels impossibly out of reach. Tilly also had a rough relationship with her mom and was desperate for approval. In Season 3, it seems like Tilly's hopes and fears for her own future will form at least some part of her ongoing journey. And who knows — maybe she will end up being a starship captain after all.

One new character, introduced in Season 2 of Discovery was Commander Nhan (Rachael Ancheril). Formerly a member of the USS Enterprise crew, Nhan became the chief of security on the Discovery, a job once held by Klingon double agent Ash Tyler. At the end of Season 2, Nhan is pretty much the only on-loan Enterprise crew member who decides to stay on the Discovery. Along with Burnham, Nhan was also nearly killed by Airiam, when the formerly friendly cyborg went beserk after being corrupted by Control. Later, Nhan personally helped Georgiou defeat Leland, and drive the nanobots out of his body.

What could Nhan be doing in Season 3? Well, for one thing, her role as chief of security could be more important than ever. If the Discovery is in totally uncharted territory, Nhan could have a lot to say about who goes where and why.

Nhan also has an interesting connection to using wormholes to navigate space and time. She belongs to the alien species known as Barzan, who originate in The Next Generation episode "The Price." It sees the planet Barzan II involved in a border negation because a wormhole appeared in their space. From Nhan's point of view, this would have all been in her future, the 24th century. But, now that she and the crew have jumped way beyond that point, what does she think about her planet (briefly) having been the epicenter of a wormhole crisis?

In Discovery Season 2, we learned that the cyborg crewmember Airiam was once a fully organic human who chose cybernetic augmentation after a crippling shuttle accident. The tech used to keep Airiam alive was later used against her when Control hijacked her brain and tried to murder Burnham and Nhan in the episode "Project Daedalus." Airiam eventually killed herself to save Burnham and Nhan from the rogue A.I. trying to control her. However, before this mission, she offloaded her memories into the main computer of the Discovery.

This feels like a major plot thread that has to be picked up in Season 3. We know at some point Discovery because fully sentient. Do Airiam's memories play a part in that? Does she eventually become the A.I. known as Zora?

One of the greatest things about Discovery Season 2 was the addition of Tig Notaro as engineer Jett Reno. Rescued by Pike and Burnham from the USS Hiawatha in the Season 2 debut, Reno was an essential part of the DISCO crew, and other than Burnham and Pike is the only other person to have looked directly into a time crystal.

The questions about Reno in Season 3 are pretty clear. First, we've never met the actual chief engineer of the Discovery, which begs the question: Will it now be Reno?

The second question is a little more interesting. Because Reno looked into the time crystal, perhaps she locked Discovery into a specific future. When Captain Pike saw his own future in "Through the Valley of the Shadow," he had to accept that future in order for the time crystal to work.

Did Reno see more than just the battle with Control? Or did she see further into the future? This may seem like a small detail, but Discovery has picked up tiny threads like this before. In Season 1, a small green spore landed on Tilly's uniform in the Mirror Universe. In Season 2, it was revealed that this event eventually led to the rebirth of Dr. Culber. Point being, Reno looking into the time crystal could actually be a huge deal.