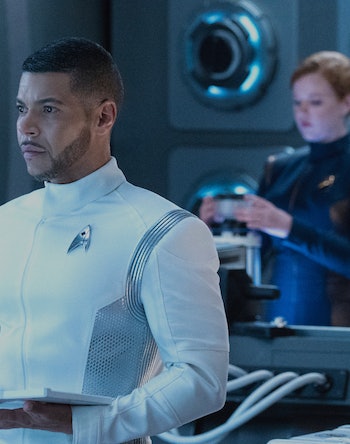 Making science fiction history probably wasn’t something Wilson Cruz believed he’d do someday, but now, in his role as Dr. Hugh Culber on Star Trek: Discovery, he’s gone from being a great actor to legend. Despite being lauded for its political progressiveness, Star Trek never featured regular gay characters in recurring roles until Discovery. Sure, 2016 established Sulu (John Cho) of Star Trek Beyond had a husband, but there wasn’t really much of a relationship depicted. In terms of actual progress, it was good, but not great.

Culber and Statmets on Discovery, on the other hand, are a real couple and their relationship actually impacts the plot specifically. These two function as characters in the world of Discovery first and foremost, which allows their relationship to avoid the trap of tokenism.

But now, Discovery’s greatest love story has been shaken-up. If you’ve seen the latest episode — “Despite Yourself,” — then you know something happens to Dr. Culber that makes it seem like the show is dropping the most progressive relationship the franchise has had in years. But, Inverse caught up with the former Rent and My So-Called Life star to figure out what his future in the Final Frontier will really be like. Wilson Cruz didn’t disappoint, and if you’re worried the show has lost its best romance, the actor has a big bomb to drop. Dr. Culber will be back.

Spoilers ahead for Star Trek: Discovery episode 10, “Despite Yourself.”

Dr. Culber has a lot of patience with difficult people. Is that something that is true of you in real life?

I like to think so! I do think that Dr. Culber cornered the market on patience. And he learned patience from being in a relationship with a genius who talks about things endlessly. I think Dr. Culber is fascinated by Stamets’s work. But yes, he is patient, I also think that any good doctor is a good listener and is a bit of a detective. I wanted Dr. Culber to be that. He actively listens and goes from there. He’s measured and a genius in his own right. He’s the smartest person in every room except when Paul is there.

How did you approach Culber standing up to Lorca in this episode?

If we go back to the very beginning when we first meet Dr. Culber, there is some tension already there between those two. And a lot of stems from the fact that, you know, I came onto this ship to do science. You know, I’m a scientist, it’s a science vessel. I didn’t come here to engage in a war. And I definitely didn’t come here to put my partner in danger in the process. I don’t see a lot of concern from Lorca in regards to Paul. I’m seeing my partner put himself in danger every time we make a jump. So, I feel like I’m the only one who is really concerned. And so Lorca seems to be the obstacle to me protecting Paul. And now that Paul is in a coma and is paying a physical price for what Captain Lorca has put him through, I think that’s when Dr. Culber finally has had enough and feels free to say what he really feels. I found it invigorating.

Will we ever get to a real future that’s like Star Trek where a relationship between two men is a given and not necessarily a symbol? Do you think that that’s part of what you’re doing with Culber with other characters you’ve played in your career?

Yes. Yes. Especially here, especially on Star Trek. I think what we’re doing here is planting seeds in the minds of young people about an ideal universe in which we all respect each other for our differences. And celebrate them, actually. I think that we are, how do I put this? You know, I think we follow in the tradition of Star Trek, I mean, in the sense that, you know, we set imaginations afire about possibilities. And I think, you know, when I think about a young teenage boy or girl of color watching this show and also happening to be questioning their sexuality and they see Dr. Culber they, I hope, feel a sense of limitlessness to their possibilities.

And I, you know, that was foremost in my mind when I took it on. I’ve had that experience a few times in my career. I knew that I was doing something similar with My So-Called Life. I feel like I did that even on a show called Noah’s Arc, on which I played another doctor. You know, even Rent, you know, there was the joy of that character was something that I wanted people to receive as a gift. It’s all really — it sounds so trite — but it’s really about the kids.

“This is not a bury your gays or kill your gays trope storyline. This is a chapter in this relationship and even Paul and Hugh have no idea what’s about to go down…this is an epic love story.”

We saw this Dr. Culber get presumably killed by Tyler but could we see Dr. Culber again? Is this really the end?

Yes. We will see Dr. Culber again. This is an epic love story. Yes. You will be experiencing highs and lows, triumphs and disappoints as you would in any relationship. And what we’re doing is inviting you to go on the journey of this relationship and the roller coaster ride that it is. And this is just one chapter in their story. And where we’re going to take you, I think, is incredibly exciting. And this had to happen in order for us to go there.

So, you know, what we’re all doing, what we’re doing now is asking the audience to trust us. This is not a bury your gays, kill your gays trope storyline. This is a chapter in this relationship and even Paul and Hugh have no idea what’s about to go down. And, you know, I give people permission to be sad on Sunday, I think that’s appropriate. I think we will all go through some stages of grief, and I think that’s okay. I think that’s why we make TV, you know? We take you on this trip. And this is part of it.