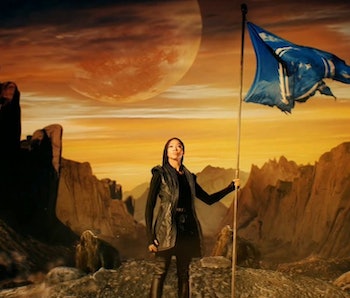 Like all new Star Treks before it, the debut of Discovery in 2017 was met with skepticism and prejudice. This is nothing new. Looking back on the debuts of The Next Generation, Deep Space Nine, the J.J. Abrams reboots, and even Picard, each new iteration of Trek has its haters. “It’s the same thing,” Jonathan Frakes told Inverse in 2018. “At conventions, you could feel the resistance from the audience about embracing yet another company, or another ship or another crew or another family on Star Trek.”

But, as Frakes and others predicted, Star Trek: Discovery is still here, and it's still living long and prospering. With Season 3 of Discovery coming at us in 2020, there's a good bet that this will be the show's best season yet. Here are six compelling reasons why.

6. Every Star Trek spin-off gets good in Season 3

The first two seasons of Star Trek: The Next Generation are not good. This isn't to say there aren't great episodes (shout-out to "The Measure of a Man"). As a whole though, it's hard to argue that Seasons 1 and 2 of TNG are fantastic. What's more, when you consider the seasons of older Trek shows are each at least 10-15 episodes longer than the franchise's modern incarnations, the quality of Discovery goes through the roof. Even if you're a DISCO hater (which, honestly, stop) there's no way you can look anyone straight in the eye and say The Next Generation was great from the beginning.

Trek fans call this idea the "Riker's beard" moment, the idea that a series needs time to mature. The Next Generation didn't get EXCELLENT until Season 3. Now, look at every other Star Trek spin-off. Deep Space Nine. Voyager, even Enterprise hit their stride in Season 3. Relative to these other Treks, the first two seasons of Discovery are pretty great. Even so, Star Trek tradition tells us this is the moment where the show will really take off.

According to interviews with both Sonequa Martin-Green and episodic director Jonathan Frakes, one huge feature of Season 3 will be that Michael Burnham won't be motivated by "the pain and guilt of her past."

In both Season 1 and Season 2, Burnham was constantly fighting the notion that she was either a pariah in Starfleet or a terrible sister to her stepbrother Spock. In Season 3, Burnham's space baggage has been ejected into space.

4. The ship will finally get a permanent Captain

Ever since Season 1, the notion of a permanent Captain for the USS Discovery has been in flux. Captain Lorca died in Season 1, and there was no way Captain Pike could remain in the center seat of Discovery beyond Season 2 because Trek canon just wouldn't allow it.

In the Season 2 finale, Pike implied Discovery's captaincy had yet to be decided. For most of the series, the default acting Captain has been Saru, the first officer. But in "The Vulcan Hello," Captain Georgiou suggested Burnham was ready for her own ship. Discovery Season 3 showrunner Michelle Paradise has confirmed several times that the question of a new captain will 100 percent be solved in 2020.

"In our finale, as Pike was leaving, he said, ‘We are going to need to choose a new captain.’ Saru said, ‘Let’s put a pin in that and see what happens.’ Discovery will need a captain. The pin will need to come out. We will need to address that in story."

The only other time a Star Trek series was led by someone who wasn't technically a Captain was Deep Space Nine. But, guess what, even in Season 3 of DS9, Commander Sisko got promoted to Captain.

3. The creative team has finally stabilized

Discovery has had widely reported instability behind the scenes. The show was co-created by Bryan Fuller in 2016, but well before the first season was completed, Fuller backed out, citing his work on American Gods as the main reason. After that, Aaron Harberts and Gretchen Berg took over as showrunners, while Kurtzman remained a producer. By the middle of Season 2, both Harberts and Berg were fired, and Kurtzman and Michelle Paradise took over, seemingly for good.

It's possible to attribute some of the tonal unevenness of Season 1 and Season 2 to this turnover. But, that's not a problem anymore. In theory, Season 3 will be the first season of Star Trek: Discovery without potential friction behind the scenes, which can only lead to a more cohesive story.

Because Discovery was set in 2256 and 2257, everything that happened on the show was always a direct prequel to Star Trek: The Original Series. While Season 1 mostly avoided this fact (or wrote around it) Season 2 tackled the close proximity to TOS head-on. (TOS begins in roughly 2265, so even Discovery season 2 was only about 8 years before.)

Now the show is set in 3187. In "Such Sweet Sorrow Part 2," the USS Discovery jumped 930 years into the future, never to return. This is well past the regular era of any previous Trek series. Worrying about what Discovery does relative to the classic series, or really, The Next Generation is now irrelevant. Discovery went from being an in-between prequel — sandwiched between Enterprise and TOS — to becoming the ultimate sequel. Or as Alex Kurtzman put it:

"The fun for us was actually to take the shackles off and free ourselves from established canon by jumping almost a thousand years into the future, and yet what we’re not doing is divorcing ourselves from canon."

This means that Discovery can connect to TNG or Picard. Between the Klingon War, Captain Pike, Talos IV, young Spock, and the classic Enterprise, explaining canon has nearly been Discovery's full-time job. But it's not beholden to dot-connecting canon stories anymore.

1. The format is closer to classic Trek than ever

Despite the fact that Discovery is so far in the future, the spirit of Season 3 already feels closer to classic Star Trek than anything the franchise has produced in years. In theory, this season won't be about a giant war. It won't be about a galaxy-wide treasure hunt. This time, it's one starship out there in the unknown, exploring strange, new worlds and rediscovering the galaxy anew.

Sonequa Martin-Green has called this new format a "blank slate." She's right. For the first time in a long time, Star Trek is poised to do something brand new: take us into a future we've never seen.

Star Trek: Discovery Season 3 comes to CBS All Access in 2020.