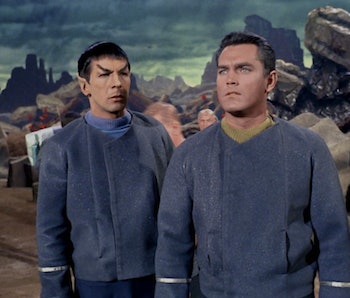 The very first episode of Star Trek: Discovery — “The Vulcan Hello” — takes place on May 11, 2256. This puts it two years after the events of “The Cage,” the classic Star Trek pilot episode in which Spock yelled a little more, and everyone in Starfleet wore turtleneck sweaters. Because the Starfleet uniforms in Discovery look totally different than the ones from “The Cage,” it might seem like the Star Trek canon is messed up, again. But it’s actually not. A tie-in novel published on Tuesday — Star Trek: Discovery: Desperate Hours — elegantly explains the discrepancies between the newest and the oldest Trek.

Mild spoilers are ahead for Desperate Hours and the first two episodes of Discovery.

Written by longtime Trek novelist David Mack, Desperate Hours is the kind of crossover novel that is just full-on fun. The book doesn’t avoid Captain Pike and the Enterprise crossing paths with the USS Shenzhou at all, it straight-up happens in the first 50 pages. The book is set in 2255, meaning it’s right in between “The Cage” and “The Vulcan Hello.” Spock teams up with Burnham, and Number One from the Enterprise teams up with Lt. Saru, all while Captain Pike gets bossed around by Captain Georgiou. Along the way, Mack fills in tiny details to help explain why the aesthetics of Starfleet seem so radically different between these two ships. The short answer? Starfleet tries out different ship designs and uniform designs simultaneously.

The Shenzhou and the Enterprise Were Built in Different Eras

When Spock beams over to the Shenzhou in Desperate Hours, he makes an internal observation which not only helps explain the ships’ differences but also comments on radical design fads, which occur between decades here on Earth.

It was clear to him that the two ships had been designed and constructed in different eras, according to very different aesthetic standards. Such drastic changes in a short span of time were not unusual among the humans of Earth, though it had proved a constant source of bemusement among their Vulcan and Andorian allies.

Spock’s observation seems connected to architecture and interior design in real life. Does the style or furniture in an American home look the same in the ‘60s and the ‘70s?

Gant and his team from the Shenzhou wore dark blue Starfleet utility jumpsuit uniforms with black trim, while the Enterprise team sported pale gold or light blue jerseys over black trousers — a new uniform style that, so far, had been issued exclusively to the crews of Starfleet’s vaunted Constitution-class starships.

Smartly, Mack has isolated the more colorful uniforms of the 2250s seen in “The Cage” to only existing on ships like the Enterprise.

There Are Precedents in Real Life and in Trek Before

While a lot of this retcon might feel a little ridiculous, it’s not crazy to think that in the span of three decades a space-faring organization could make a lot of design changes. The spacesuits of NASA’s Mercury program look pretty different from the Apollo suits, to say nothing of the various styles of the Space Shuttle flight suits. And the space shuttle itself creates a nice metaphor for the differences in Trek ships. Though a sophisticated and multi-purpose spacecraft, the space shuttle no longer flies. In its place are the smaller crafts, which, to a time-traveling historian might look a little less sophisticated than the Space Shuttle.

Star Trek has had more than one uniform style existing side-by-side in other decades. During the Deep Space Nine era, the black jumpsuit seemed to be the uniform of choice for a crew on space stations, while crews of starships continued to wear the more colorful Next Generation pattern. But by the time the film Generations rolled around, we saw the crew of the Enterprise rocking both uniform styles at the same exact time — which means we could get a mixture of Starfleet styles at some point during Discovery, too.