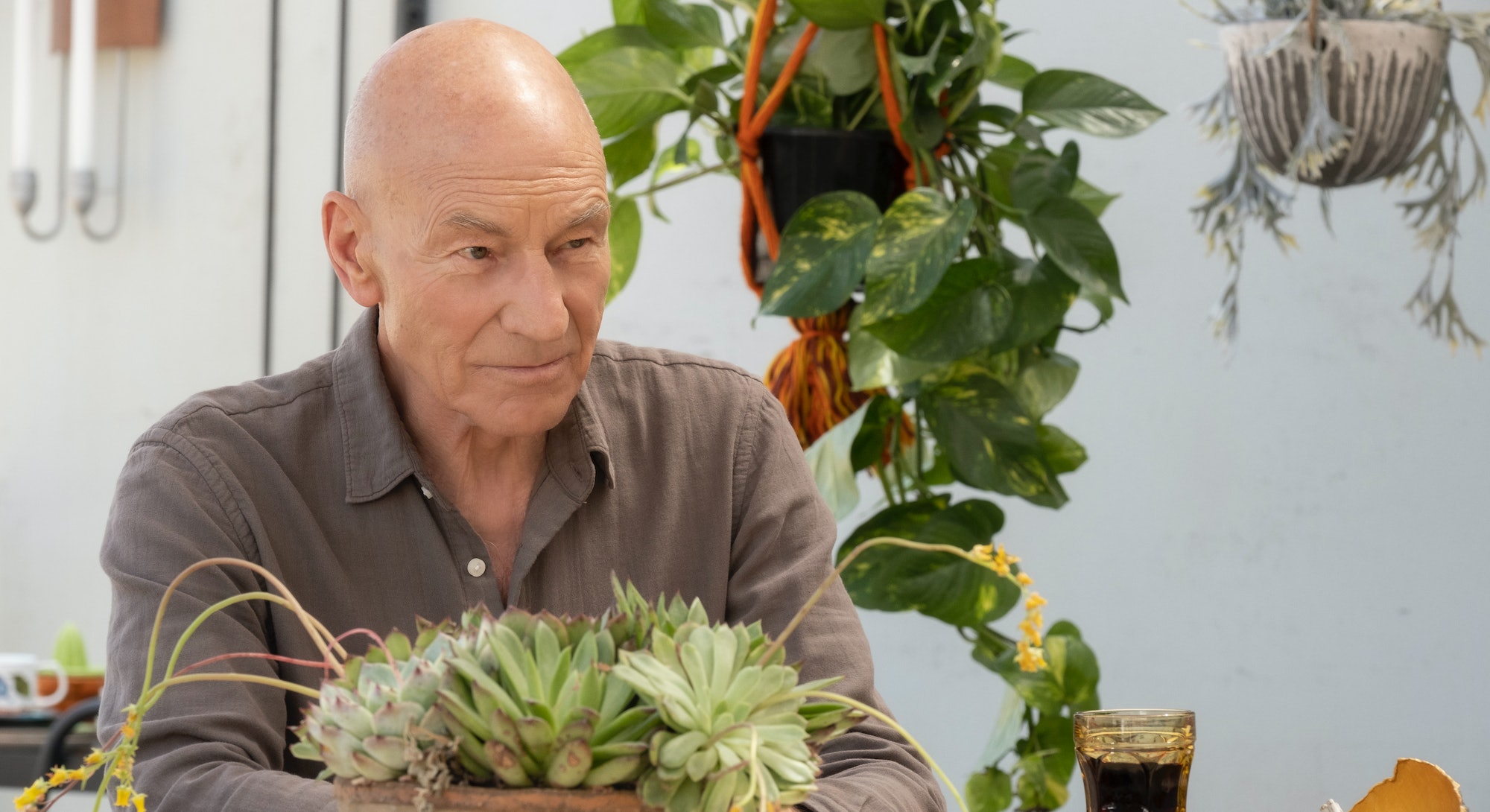 Jean-Luc Picard is having a hard time making it up the stairs.

In the first episode of Star Trek: Picard, the intrepid former captain of the Starship Enterprise huffs and puffs his way through a chase sequence. Is his artificial heart malfunctioning? Nope. He’s just 79! For fans hoping that Stewart would be rocking his sleeveless tank top from First Contact and snapping Borg spines in half, that’s not what this is. Picard drinks decaf Earl Grey now, so chill out.

Although this new Trek series does indulge in a few “one last job” cliches, overall this is a more ruminative series despite a hearty dose of heart-pounding action to keep things moving. In this way, Picard is exactly what you think it is. It’s Star Trek: The Next Generation meets Logan, which is more delightful and much weirder than anyone expected.

Star Trek: Picard — which dropped its first episode on CBS All Access Thursday morning — is a rare sequel. Make no mistake, this is a direct sequel to the Next Generation era of Trek. Data sang “Blue Skies” in 2002’s Nemesis, and that song opens the debut episode. The 2009 J.J. Abrams reboot was the last time the late 24th century was mentioned in canon, and this episode basically begins with Picard giving a TV interview about the Romulan supernova from that film.

After that, the hand-holding ends. Confused about that duplicate Data android in the drawer? Tough! Don’t remember who Bruce Maddox is? (He’s a super obscure character who only appeared in one episode of Next Generation.) Too bad! Use your CBS All Access account (or Netflix) to watch TNG, Season 2, Episode 9, “The Measure of a Man.”

The lack of fanfare when old characters are reintroduced is genuinely refreshing. This naturalistic approach means no one makes a big deal about “living in the future.” There are a million Easter eggs for Trekkies to squeal about, but it’s not fan service, and if you’ve never watched The Next Generation, you won’t be distracted. That’s because Picard has added its own new mythology to help this series stand on its own. Synthetic life forms (read: androids, rebranded) went rogue 14 years ago, and no one knows why. Now, flesh-and-blood androids live on Earth, and one might be Data’s spiritual and technological “daughter.” If this all sounds familiar, it should.

Though his tea might be decaf now, his red wine still gives us a buzz.

Data had a daughter before, in TNG's Season 3 episode “The Offspring,” but this series isn’t about doing something technologically new with Trekkie sci-fi concepts. At least not yet. Renegade A.I. and damaged Borg vessels have populated the Trek toy box for a long time. Take it from someone who had an actual Star Trek: The Next Generation toy box, Picard is a new bold step for the franchise in terms of tone and perspective.

This series is about a character, not a group mission. Arguably, Trek already laid the foundation to do this kind of thing with Discovery. But that show couldn’t be called Star Trek: Burnham, because Discovery is also about a starship boldly going, sometimes where no one has gone before, and sometimes where everyone has gone before. For all the hater hand-wringing about Discovery breaking the Trek mold, its basic format — particularly in Season 2 — is more retro than most Trek spin-offs.

Though Picard is building on the success of Discovery, this ain’t no DISCO. If Discovery was Star Trek slamming vodka and Red Bull while playing with 1960s characters from “The Cage,” then Picard is the most famous Next Generation character drinking red wine and thinking about the good old days when those good old days suddenly come knocking on his door.

At times, Picard seems like a super-readable pulp mystery, and others when it feels like a decent Battlestar Galactica knockoff. I’d wager this cocktail of styles might be the work of Picard’s most visible writer and showrunner, the Pulitzer Prize-winning novelist Michael Chabon. Last year, Chabon told me his approach to writing Star Trek is that of fan fiction: “This is licensed and approved and maybe that invalidates its status as fan fiction. But I don’t think so.”

Chabon’s blueprint for Picard might be hidden in his 2004 Sherlock Holmes pastiche, the novel The Final Solution. In that book, an 89-year-old retired Sherlock Holmes is tending to his bees when he gets sucked into a 20th-century mystery. Picard has his vineyard, Holmes had his apiary. Naturally, there has to be a huge mystery to get someone like Jean-Luc on the case again, and here, that plot is set into motion by the mysterious young Dahj (Isa Briones), who could be the real “next generation” in more ways than one.

I won't reveal Dahj’s exact nature here, nor the shocking events of the episode. It’s familiar sci-fi territory, making it easy to overlook that Star Trek has never felt this grounded before. Part of this grounding is literal. Jean-Luc doesn’t leave Earth at all in the first episode, and the only glimpse we get of folks in space happens at the very end of the episode. But the down-to-Earth feeling of Picard is deeper than that. It’s evocative of what the slightly more chilled-out TNG vibe looks like in 2020. Picard isn't a slow series, but it’s not Discovery.

For those of us who have a soft spot for Picard sitting around and talking on The Next Generation, the new series is a welcome return. But things aren’t as cozy, and you can feel each episode playing out like a chapter in a novel. Although the series has been renewed for a second season, it’s clear Picard is telling a limited story. This isn't an open-ended adventure.

Picard recaptures the joy of Patrick Stewart in his most famous role without feeling like a lame reboot. Though his tea might be decaf now, his red wine still gives us a buzz.

Star Trek: Picard is streaming now on CBS All Access. New episodes drop on Thursdays. Season 1 will have 10 episodes in all.