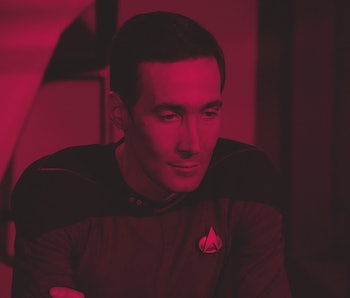 In its very first episode, Star Trek: Picard sent Jean-Luc on a hunt for a slightly obscure Star Trek Easter egg: Commander Bruce Maddox, who we last saw in 1989 in The Next Generation episode, "A Measure of a Man."

So who is Maddox, and why does he matter so much for Picard? Let's travel back in time to the trial of the 24th century, the day Data got to decide what to do with his life.

In the premiere episode of Picard, Dr. Anges Jurati (Alison Pill) makes it clear Maddox admired Data. But, Maddox literally tried to take Data's civil rights away in "The Measure of a Man," which focused on the quandary within the Federation about how to classify Data's "species." He was an android constructed by a human — Dr. Noonian Soong — but making copies was impossible without dismantling him.

Enter Maddox (Brian Brophy), the chair of robotics at the Daystrom Institute, a fancy future research center that we've heard a lot about, and see for the first time in Picard. In "The Measure of Man," Maddox dreams of whole armies of Datas, which freaks out Picard because he knows this is basically slavery.

In true Star Trek tradition, Maddox isn't evil, just operating under the assumption that Data is not alive. Picard and Guinan (Whoopi Goldberg) know better, and after some rousing speeches, Picard successfully convinces a Starfleet judge that Data is alive and has the right to choose whether or not he can be dissembled. Data opts-out, but doesn't hold a grudge against Maddox.

He says, "Commander, continue your work. When you are ready, I will still be here."

After this, Maddox was mentioned a couple more times in TNG, notably in the classic episode "Data's Day." The premise of the episode relies on Data keeping a journal of a typical day on the Enterprise for Maddox for study. So, by the time of "Data's Day," in the year 2367, Data and Maddox are friendly-ish, which sort of explains Dr. Jurati's comment in Picard.

Sometime before the events of Picard, it seems Maddox built secret Data-like androids, which is crucial to the plot of the entire show. During Jean-Luc's big interview in the first episode, we learn what "Children of Mars" already hinted at: "Rogue Synths" attacked Mars 14 years prior in 2385. At some point after the events of The Next Generation, synthetic lifeforms — possibly very similar to Data — were working on Mars, and there were enough of them to stage a full-blown rebellion. It's not totally clear Maddox was responsible for helping create them, but Jurati says nobody even is allowed to build any kind of androids.

Picard believes that Maddox created Dahj and her sister Soji because he was inspired by Data's paintings. We don't know that's true, or if Picard and Jurati will be successful in their search for Maddox, or if their assumptions about what he's done are even correct. Because if Dahj and Soji are Data's spiritual cybernetic "daughters," Maddox could be just one piece in a bigger puzzle.

In TNG and the original series, and even in one of the Short Treks in the Discovery-era, androids who are programmed to think they are human still have blinking circuits inside their bodies. Dahj and Soji aren't like that. If Picard thinks Maddox made at least two robotic "children" based on Mr. Data, the bigger question might not be about Dahj's "twin" sister Soji. Because if androids have flesh and blood now and no circuitry to speak of, we're at a point in Star Trek where anyone could be a secret android, right?

Star Trek: Picard episode 1, "Remembrance" is streaming now on CBS All-Access. Future episodes will drop on Thursdays for the next nine weeks.