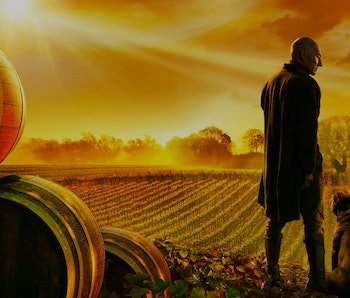 Though it may seem like relatively inconsequential episode until the very end, “Children of Mars”is a deceptively complicated episode of Short Treks. Not only does this eight-minute short throw a huge curveball into the canon, but it also creates the backstory of Star Trek: Picard in a surprising way.

Starring Ilamaria Ebrahimtk and Sadie Munroe as Kima and Lil, two space-age school kids who can’t get along, this heartfelt episode will give you serious feels. But if you’re not paying attention, you’ll also miss a billion Star Trek Easter eggs! From overt references to First Contact, to sly nods to Deep Space Nine, and possibly even a forward-jump to Season 3 of Discovery, this episode is packed with deep cuts. Plus, the smallest Easter egg of all actually changes everything you think you know about A.I. in Star Trek. Here are the biggest Easter eggs and references in ‘Children of Mars.”

Spoilers ahead for Short Treks “Children of Mars.”

When we first meet Kima and Lil, we find out their parents work on Mars. In Star Trek lore, the Utopia Planitia shipyards are where the vast majority of starships are constructed during the Next Generation era. Right at the start of this episode, we see starships being built in orbit.

Both Lil and Kima live near the San Francisco Bay Area, because we see the Golden Gate Bridge out Lil’s window. San Francisco has been the headquarters for Starfleet command since the 22nd century, but in the Deep Space Nine episode” The Changing Face of Evil,” a Breen attack on Starfleet Earth left sections of the Golden Gate Bridge in ruins. That happened in 2375, but events of “Children of Mars” probably happen around 2386, by which time the iconic landmark was likely rebuilt.

While Lil is getting ready, you can briefly see a poster in her room that has the word “Bajoran” written on it. The Bajorans are native to the planet that Deep Space Nine originally orbited before being moved to protect the Bajoran Wormhole. The first significant Bajoran we met in Star Trek was Ro Laren, who became a member of Picard’s Enterprise crew in the TNG episode “Ensign Ro.” It’s unclear what the word “Bajoran” refers to on Lil’s poster. Is it a Bajoran sports team she likes? Something about the Bajoran wormhole? Maybe Major Kira from DS9 could make a cameo in Picard. Hell, if Seven of Nine can come back, why not?

When Lil and Kima head out to grab a shuttle bus, the design feels straight from the 2250s of Star Trek: Discovery. But, the red and black markings indicate that this is a 24th century school bus. So, maybe Starfleet recycled its old shuttles and had them turned into school buses. Right?

In several school scenes, we can see holographic banners that read “Happy First Contact Day.” This means that this episode happens on April 5, and that’s because in First Contact, we learn Vulcans first encountered humans on April 5, 2063. Captain Picard and the crew of the Enterprise helped make sure it happened after time-traveling Borg tried to stop it. Assuming “Children of Mars” happens in 2386, this means this episode happens 323 years after “first contact.”

During Lil and Kima’s various fights, we hear a slowed-down cover of David Bowie’s iconic song “Heroes.” At first, we thought this was sung by composer Jeff Russo, but, after checking with the episode’s director — Mark Pellington — it turns out this is a 2010 Peter Gabriel cover. Bizarrely, this exact Peter Gabriel cover of “Heroes” was used in Stranger Things season 3, also a sci-fi thing about kids!

This is also not the first time the world of David Bowie has crossed-over with Star Trek. In the Discovery episode “An Obol for Charon,” Tilly and Stamets sing “Space Oddity” together to distract Tilly from a painful procedure. Prior to that, David Bowie’s wife, Iman, stared in The Undiscovered Country as the shapeshifter Martia.

Vulcan teacher… or is he a Romulan?

The teacher of the school appears to be a Vulcan. (The pointed ears a dead giveaway.) But Romulans have lost their home planet by the time Picard takes place, so it’s possible a Romulan could be living on Earth and working as a teacher.

One member of Picard’s crew in the new series is a young Romulan named Elnor (Evan Evagora.) We don’t know if the Federation is at peace with the Romulans during the time of Picard. But thanks to the IDW comic book series Picard: Countdown, we know Jean-Luc was trying to evacuate several Romulan planets before the supernova destroyed Romulus.

The absolutely biggest bombshell in the entire short is one that you might miss. Obviously, Mars is attacked, but you might be wondering by who? If you check the news screens, there’s text on the screen that says “Rogue Synths Attack Mars - 3000 Estimated Dead.”

This means, that a group of A.I.s — which are now called Synths — have gotten together and attacked the largest starship production facility in the Federation. It’s unclear if these Synths are androids like Data. But because “Children of Mars” takes place before the events of Picard, the attack on Mars is clearly something Picard feels haunted by. Did he have a hand in putting a bunch of Synths on Mars in the first place? Was Picard sympathetic to these A.I.s? Was he against their creation? All of this will likely be a big focus of Picard.

Another tidbit from the news feeds suggests this network is called “FNN,” which presumably stands for Federation News Network. It’s been a while since we’ve seen journalism in Star Trek, but in Generations, several reporters were on the bridge of the Enterprise-B interviewing Captain Kirk. In Deep Space Nine, Jake Sisko’s big job was to be a war correspondent, reporting on the Dominion War from behind enemy lines.

Also of note: Along with “FNN,” we see a slightly modified version of the Federation seal. This logo looks a little thinner than the Federation flag used in The Next Generation. It almost seems like there are fewer stars on this flag than in the heyday of Jean-Luc and TNG.

This could connect with future episodes of Discovery, because in the first trailer for Season 3, Burnham encounters a Federation flag 930 years in her future, which has way fewer stars than in her time. Season 3 of Discovery will occur roughly in the year 3197, t930 years from the point the crew jumped from in 2267.

Picard takes place in 2399, a century after Discovery Seasons 1 and 2, and 898 years before Season 3. So, if the Federation flag does have fewer stars in Picard, the Federation has lost several member worlds since The Next Generation. The series could be setting up the beginnings of the Federation losing its clout, and the shrinking number of stars on the seal could be the link.

The events of Picard are set in 2399, when Jean-Luc is no longer part of Starfleet. In “Children of Mars,” we see him make a statment about the Mars attacks and he’s called “Admiral Picard.” So, at this point, he’s clearly still in Starfleet, which means this all happens before the events of the new show.

How long before? Well, a good guess is that “Children of Mars” happens in 2386, the year that Jean-Luc apparently left Starfleet.

The title of the episode probably refers to the fact that both Lil and Kima are “children of Mars” orphaned by a catastrophic attack. But, in Greek and Roman mythology, the children of the god called Mars were named Romulus and Remus. The primary planets in the Romulan Empire are called Romulus and Remus. What’s more, in the Star Trek timeline, the planet Romulus is destroyed in 2387, which is likely within a year or so of this episode. Because the Romulans will have a big role in Picard, and because Jean-Luc was so involved with both Romulus and Remus in TNG and Nemesis, it seems clear that everything we’re seeing in this episode, even the title, is highly relevant to the larger story to come.