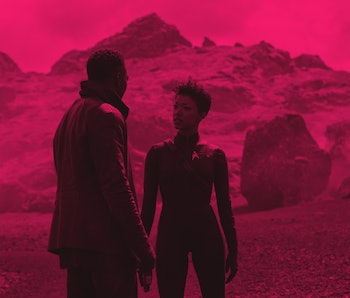 The mission of Starfleet is to boldly go where no one has gone before, but usually all that bold going happens within the canon's established stretch of time. In Star Trek: Discovery Season 3, a Starfleet vessel will venture to a future where Starfleet may no longer exist. How does a Starfleet ship and crew operate under those conditions?

Discovery Season 3 will have to answer that, though one question we can explore right now is this: Just how long does Starfleet last? We know Starfleet is still around at the end of the 24th century, mostly because we saw a huge fleet of Starfleet starships in the Season 1 finale of Star Trek: Picard. But after that, things get dicey.

Here are three things we already know about the future of Starfleet after the 24th century, and what all of that might mean for Discovery Season 3.

3. A new character remembers Starfleet — In the trailers for Discovery Season 3, Burnham meets Book (David Ajala), a human of the 32nd century, or roughly 3187. In the trailer, Book recognizes the Starfleet insignia on Burnham's uniform, and mentions that Burnham must "believe in ghosts," because of "that badge on your shirt."

This is our first clue about how long Starfleet might have lasted past the 23rd, 24th, and 25th centuries. Analogously, Discovery leaving the 23rd century and arriving in the 32nd century is equivalent to a boat from the Byzantine Empire, roughly the year 1090, appearing in the Atlantic Ocean in our present time of 2020. Your average person would not recognize a flag from the Byzantine Empire in 2020, and that's because the Byzantine Empire has not existed since 1433. So, unless you were a specific kind of historian, there's only a very small chance you'd recognize what you were seeing.

In other words, unless Book is a historian focused on obscure and ancient history, the fact that he recognizes a Starfleet insignia at all seems to indicate Starfleet might have lasted well past the 25th century, and perhaps only became a "ghost" in the past two centuries or so.

2. Starfleet lasts at least until the 29th century — The idea that Starfleet isn't ancient history by the 32nd Century, but may have endured until closer to 3187 is backed up by existing Star Trek canon. We've never had a Trek film or series take place beyond the 24th century; but there have been glimpses into a future beyond that.

In the prequel series Enterprise, Captain Archer briefly visited the 26th century, in which the USS Enterprise-J was in service. In the Voyager episodes "Future's End" and "Relativity," time travelers from the 29th century visit the 24th. Both the USS Relativity and Aeon were Federation (and probably Starfleet) vessels operating at this time.

By the 29th century, it seems pretty clear that Starfleet regularly travels in time as well as space. Whether this is true of all Starfleet vessels was never made clear, but when Captain Braxton recruited Seven of Nine in the Voyager episode "Relativity," it's pretty clear he was a future member of Starfleet, even if the time ships existed in their own specific branch.

Either way, it's pretty nuts that Starfleet, in some way, shape, or form exists in the 29th century. That means, as an exploratory group/force/peace-keeping armada, Starfleet canonically lasts at least eight full centuries.

A new character whose name we don't yet know, played by Adil Hussain, appears to be some kind of Federation official. In the trailer, he tells Burnham he's been "waiting" and shows her what we can only assume is the "new" Federation flag. As several fans have pointed out, the number of stars on this future Federation flag is significantly fewer than in the era of The Next Generation, which could prove that a massive rupture led to several planets leaving the organization. Hussain has been hush-hush about his role in Season 3, but it seems clear that he has some answers about what happened to the Federation. It's not totally clear if the Federation does exist, or if Hussian's character is showing Burnham an old flag from the last point that the Federation did exist.

The last piece of this puzzle is the fact that the Short Treks episode "Calypso" might have low-key confirmed that the Federation eventually morphed into something called the "V’draysh", a group at war with some humans. If the V'draysh is the Federation (or some splinter version of it) and Starfleet is a "ghost" then it seems reasonable that Starfleet ended, or failed, or was outright destroyed before Discovery Season 3 began.

This could mean the Federation collapsed around the same time, but maybe not. Some of the big posters for Discovery Season 3 show Michael Burnham and the rest of the crew with a tattered Federation flag. But the biggest question that still remains is whether or not both Starfleet and the Federation were destroyed. Because if some remnant of Starfleet remains, it seems possible, based on what we saw in Voyager, that it might not be friendly...

Star Trek: Discovery Season 3 will come to CBS All Access in 2020.