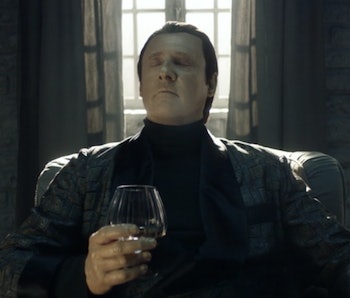 Okay, so who sang "Blue Skies" in Star Trek: Picard? There are two answers.

If you got misty in the final moments of the Season 1 finale of Picard, prepare to cry even more. It turns out that the final rendition of "Blue Skies" featured a surprising voice cameo from an unexpected cast member. It's more than appropriate — it's perfect. Spoilers for the Picard Season 1 finale ahead.

For casual fans, opening the very first episode of Star Trek: Picard — "Remembrance" — with the Bing Crosby version of the song "Blue Skies" might have scanned as schmaltz. But for longtime fans of The Next Generation, this was a lovely deep cut that directly tied the ending of 2002's Nemesis to the events of the new series. At the beginning of Nemesis, the android Lt. Commander Data sang the Irving Berlin-penned song, "Blue Skies" at the wedding of Will Riker and Deanna Troi. At the end of the movie, Data's android "brother" B-4, spoke several lines of the song, hinting Data's memories were preserved.

In the final episode of Picard Season 1, "Et in Arcadia Ego Part 2," we hear a new version of the classic song — previously covered by so many amazing artists, including Willie Nelson, Doris Day and, perhaps, most famously, Ella Fitzgerald.

As Data puts on a record, just before his final "death" inside of his quantum simulation, we hear a lush, loving version of "Blue Skies," sung by a woman. The person singing is Picard actor Isa Briones! And, as of right now, Lakeshore Records has released Briones' version of the song as a single, from the forthcoming Star Trek: Picard soundtrack album, composed by Jeff Russo.

You can snag that single on iTunes, Spotify AND now, you can also watch Isa Briones recording and singing the song for the soundtrack in this newly-released behind-the-scenes feature from CBS.

In it, Briones talks about her family's history in musical theater (BTW, she was also part of the touring cast for Hamilton) and how excited she was to be giving a "call-back to Star Trek: Nemesis." It's an awesome special segment for fans and seeing Briones record the song with Jeff Russo is totally heartwarming. Here it is!

But, for some fans, all this classic crooner stuff could actually be an even bigger reference to actor Brent Spiner moonlighting as a singer of classic oldies. Back in 1991, at the height of Next Generation mania, Spiner released an album of standards, called Ol' Yellow Eyes Is Back, referencing Frank Sinatra's nickname as "Ol' Blue Eyes," and Data's yellow eyes, simultaneously. Was the album good? You bet it was! Yours truly owned that sucker on cassette tape at the tender age of 10-years-old.

Though Ol' Yellow Eyes Is Back did not feature Spiner singing "Blue Skies," it did feature a version of "It's a Sin to Tell a Lie," which featured back-up singing from Michael Dorn (Worf), Levar Burton (Geordi), Jonathan Frakes (Riker) and of course...Patrick Stewart.

So, now that the latest member of the family — Isa Briones — has proven that she's perhaps an even better singer than those guys, can we expect a new standards album? Who doesn't want to hear Briones dueting with Spiner? Come on. It would be amazing.

Season 1 of Star Trek: Picard is streaming on CBS All Access.

More like this
Entertainment
Sep. 24, 2022
5 years ago, the most pivotal sci-fi franchise ever made a crucial comeback
By Ryan Britt
Culture
Sep. 28, 2022
35 years ago, one last-minute script rewrite changed Star Trek forever
By Ryan Britt
Entertainment
3 hours ago
Werewolf by Night’s breakout star on Elsa Bloodstone’s future in the MCU
By Eric Francisco
Related Tags
Share: