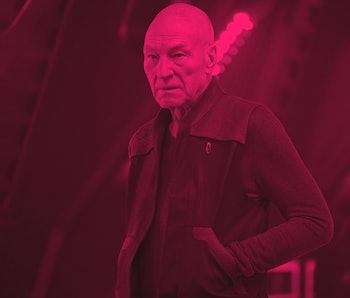 After a quantum rollercoaster of ten episodes, Season 1 of Star Trek: Picard has come to an end, and the good news is that (for the most part) the series stuck the landing. The finale succeeded due to two very smart decisions on the part of the creative team. First, it avoided any last-minute mystery box twists to fix previous plot holes. Second — and perhaps more boldly — Picard made a major change to its main character, without pulling the punch one bit.

Here's how these two elements made the Picard finale so satisfying and why Star Trek was able to surpass The Rise of Skywalker and Blade Runner 2049 at the same time.

Spoilers ahead for all of Star Trek: Picard Season 1, but specifically, episode 10, "Et in Arcadia Ego Part 2."

The finale of Picard Season 1 sees Jean-Luc die, only to be reborn in an android body. Part of the reason this was so satisfying is that the road to this eventuality was pretty clearly laid out in previous episodes. The canon of The Next Generation ("Inheritance") and classic Star Trek ("Return to Tomorrow") contains several precedents for human brains getting transferred into android bodies Westworld-style, and the tech to do it in Picard specifically was implied in the first episode, and then made manifest in the ninth. This makes Picard ending with Jean-Luc waking up in what is essentially the body of a Replicant feel earned and deeply heartfelt.

Picard's Season 1 finale also avoided relying too heavily on fan service and nostalgia. Instead, it wrapped up loose plot threads by relying on things that were set up in this series, and this series alone. Let's contrast this with another big, nostalgic sci-fi property: The Rise of Skywalker.

Picard vs. The Rise of Skywalker

Pitting Star Trek against Star Wars is the oldest nerd trick in the book, and should probably be outlawed because it really is like comparing illiterate virgins to functional adults. Yet because these two "star" franchises are so popular, and both enjoying massive comebacks, the comparisons seem natural. Would Star Trek have had the guts to do grumpy old man Jean-Luc had The Last Jedi not shown them the way? Maybe, maybe not. Either way, taken as a whole, Picard demonstrates a thoughtfulness that The Rise of Skywalker lacked.

Nearly everything in The Rise of Skywalker relies on strange plot retcons (Sith Wayfinders, Palpatine being alive) which the audience is asked to forgive because of a strong infusion of visual nostalgia. We're meant to look the other way about things that make zero sense because something is cool.

If Picard had gone The Rise of Skywalker route, this would have resulted in Data actually having come back to life (which didn't happen) or Picard inexplicably becoming assimilated by the Borg again. While Rise of Skywalker crammed in every available random character for a cameo (voiceover or otherwise) Picard resisted this temptation. When a giant fleet of ships shows up in the climax of "Et in Arcadia Ego Part 2," it would have been very easy to have featured a cavalcade of familiar starships and faces. Instead, Picard just gave us Riker, someone who we have already seen during the season, and had good reason to be in on the action.

Both The Rise of Skywalker and Picard ended with a last-minute rescue from a fleet of starships. The essential difference is that in Star Wars, that fleet of starships made zero sense, and in Star Trek, it did. One was powered by nostalgia alone, and the other by solid writing.

The other glorious aspect of Picard's finale is a little more subtle. After decades in which various sci-fi franchises have played with the notion of revealing a human hero isn't really human, Star Trek boldly goes there.

Infamously, since 1982, Blade Runner has played fast-and-loose with the idea of whether or not hero Rick Deckard (Harrison Ford) was really a Replicant. While Blade Runner 2049 bravely made its primary hero Officer K (Ryan Gosling) a Replicant, the film stopped short of confirming Deckard was one, too. For fans who wanted a definitive answer, the vagueness of Deckard's Replicant status in Blade Runner 2049 read more like a cop-out than an artistic choice.

Picard makes no bones about Jean-Luc's new robot bod. We're very clearly told that yes, he's still alive, and yes, he also died. Jean-Luc even jokes with Soji that as a fellow Synth, he's now "free to travel" since the Federation has lifted its android ban. Picard embraces the idea that the notion of being alive or sentient doesn't have to apply to a strict definition of humanity. Blade Runner did this through a noir lens, and Battlestar Galactica did it by telling the story of a space apocalypse. But neither franchise had the guts to make their lead character into a synthetic lifeform.

Turning Jean-Luc into an android is the bravest, most interesting thing the Star Trek franchise has done in a very long time. The reason it worked isn't that the idea was brand new, but because it was methodically and deliberately earned.

When it comes to big plot twists and thematic shifts, Star Trek: Picard has taken a bold step while proving it's known how to make it so all along.

All 10 episodes of Star Trek: Picard Season 1 are streaming on CBS All Access.