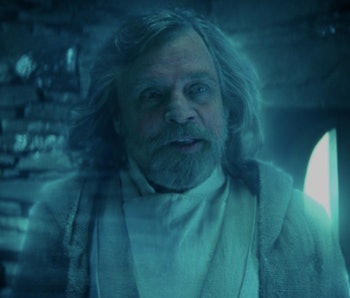 Did Luke know who Rey was before The Last Jedi? On this point, the Force is cloudy. In The Rise of Skywalker, Force ghost Luke seems to know exactly who Rey is, including her complicated backstory. He makes it clear that he and Leia always knew, but how? At what point did the Skywalker twins get the full download on Rey?

Could this wild Rise of Skywalker theory from redditor u/gonetoblack actually fix the most perplexing Star Wars film of them all? Let's unlearn what we've learned.

What if Luke was on Jakku around the same time Rey's parents were, and he actively helped them hide her from Emperor Palpatine. In Rise of Skywalker, Kylo Ren says, "they sold you to protect you," which, while being one of the worst excuses for negligent parenting in any movie ever, does suggest Rey's parents were desperate to find a way to keep her totally hidden and anonymous. Sound familiar?

In Return of the Jedi, Obi-Wan says this of Leia's secret family identity: "That is why your sister remains safely, anonymous." Unlike Luke Skywalker, Leia was given a totally different last name after she was adopted by Bail and Breha Organa. Because her name was Leia Organa, nobody suspected Leia was a secret Skywalker because Obi-Wan, Yoda, and Bail wanted to keep it that way. (They did a worse job keeping a Luke a secret, but we'll get to that.)

When was Luke on Jakku?

Assuming Luke Skywalker was on Jakku around the same time as Rey's parents (or was there specifically to meet them) he's pretty much an old pro when it comes to hiding children and changing their identities. In fact, if Luke was in on this scheme, he may have specifically suggested that the parents never tell Rey, or anyone, her last name.

(We also have to assume Rey's mom's maiden name was also something people were aware of, provided of course, some people even change their names when they get married in Star Wars. We don't actually know if they do! In the old EU canon, Leia became Leia Organa Solo. But, not in real canon. She just stayed Leia Organa. Anyway

The canon origin of Luke visiting Jakku is from a book called The Legends of Luke Skywalker, which floats the idea that Luke was on Jakku in the year 5 ABY. (Right after the Battle of Endor.) Assuming this is true (and even the author, Ken Liu, says the book is called "legends" for a reason) that chronology doesn't work with Rey's age in The Force Awakens. Assuming Rey is roughly the same age as Daisy Ridley, and according to most canon sources, Rey was born in 15 ABY, if Luke met Rey's parents on Jakku right as the Galatic Civil War was ending, it was about ten years before they actually had her.

Still, if we allow Luke to be on Jakku once, he can be on Jakku again. Maybe Palpatine's son (who is a clone, supposedly) specifically went to Luke Skywalker for help really early in the game. And then, probably about twenty years later (Rey is like 5 or 6 years old when she gets dropped off on Jakku) he hits-up Luke for even more help "hiding" their daughter on a terrible planet, working in the service of a junk boss for the rest of her life.

TL;DR: This theory "works" if Luke was on Jakku twice, and behaved similarly to how Obi-Wan behaved with him (i.e. helping hide a Force-sensitive child from the prying eyes of the Sith). Granted, this plan seems much sloppier than Obi-Wan hiding baby Luke, but then again, that plan was pretty sloppy, too. If Luke was in on the let's-hide-Rey-on-Jakku-plan, everything about his knowledge of her background in The Rise of Skywalker would suddenly make sense, including the idea that Luke and Leia both knew Palpatine never "died."

Meeting Rey's Parents Would Change What Luke Knew About... Everything

If Luke met Rey's parents (Palpatine's son and his wife) right after the Battle of Endor, this could establish that Luke found out the Emperor didn't die pretty much right after seeing Palps fall down that reactor shaft. So far, this works.

Then, in Rise of Skywalker, Lando says he and Luke were searching for Ochi (the Sith dagger dude) way back in the day. If Luke was tipped-off by Rey's parents that the Emperor wasn't dead, it stands to reason he'd want to track down Palps on Exegol. So, that all checks out too.

If we decide that Luke and Rey's parents then hatched the plan to hide Rey two decades later, that's fine, too. Even if their plan kind of sucks.

There's just one problem. Yep, You guessed it: The Last Jedi.

In that film, Luke seems to have no clue who Rey is when she shows up on his island. Now, that's mostly fine, because at first, Luke has cut himself off from the Force, so it's possible he really didn't know who she was. But, if we go with the idea that he's known about her since (arguably) before she was born, then it makes little to no sense that he would go into hiding in the first place. Let's think about this. If we leave Luke out of this, then The Rise of Skywalker lets him off the hook with the Palpatine stuff. If Luke never met Rey's parents and knew nothing about Palpatine coming back to life, going on a quest for the Sith Wayfinders with Lando wouldn't have been about finding an alive Palpatine; it would have been about eradicating what was left of the Sith.

If Luke knew Palpatine was alive the whole time, the idea that he'd go into hiding after Ben Solo turned to the Dark Side is ridiculous. In the context of The Last Jedi, we can accept Luke giving up on the Jedi and leaving the fight, but if Luke thinks Palpatine is alive then giving up on everything makes no sense. If this Rise of Skywalker headcanon were true, Luke isn't just a weird hermit, he's actively irresponsible.

Okay, So When Did Luke Know Rey Was a Palpatine?

If Luke helping Rey's parents = Luke knowing Palpatine is alive, then it's very hard to accept that Luke would cut himself off from the Force, knowing that Palpatine would eventually return. Unlike Obi-Wan and Yoda, Luke also didn't need to drop off the grid to protect himself. The First Order was pretty bad, but they were never the legitimate government and being a Jedi wasn't a death sentence during that time. If Luke knew about Palpatine (and by extension, his family) then there's no way he would have gone into hiding.

So, as tempting as this fan theory is, in terms of explaining Luke's knowledge of Rey's origins, the only way for it to really work is to assume Rey's parents acted alone. Luke could have become aware that Rey was a Palpatine sometime during the course of The Last Jedi, and through the Force, relayed that information to Leia. What would that telepathic chat have looked like? Probably something like this.

LUKE: Leia, it's Luke. This young woman is Palpatine's granddaughter.

LEIA: Hey Luke, in a coma right now, can't talk. But, I already figured that out? I've seen her heart though, she's a good kid.

LUKE: Great, if you see her again, let's be chill and not mention it to her.

LEIA: Yeah, no shit Skywalker. I'm still pissed you told me about my real dad.

Even if we do a Jedi mind trick on ourselves to make it seem like there are no plot holes between The Last Jedi and The Rise of Skywalker, it's still not helpful to give Luke too much information in advance. I mean, this guy saw Ben Solo's future, and we all know how that turned out.

For now, as far as fan theories go, it's healthier to assume Leia knew more than Luke and smartly, kept the information to herself until she needed to share it.

The Rise of Skywalker is out now on digital download.