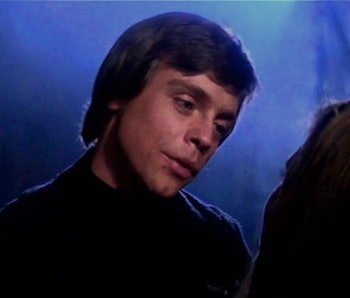 While the most famous plot twist in all of Star Wars is generally about Luke Skywalker and who is daddy really is, the notion that Leia is also Luke’s sister and Vader’s daughter gets less attention. And that’s because it feels like an afterthought in the writing of Return of the Jedi. So much so, that even Luke Skywalker actor Mark Hamill suspects it wasn’t planned out ahead of time.

On Monday, the New York Times published an insightful profile of Mark Hamill written by David Itzkoff. In it, Hamill revealed his trepidation about returning to the role of Luke Skywalker in The Force Awakens, but also his fierce investment in the way the character has been written over the years. In April, Hamill said his gut reaction to Rian Johnson’s script for The Last Jedi wasn’t positive: “I fundamentally disagree with virtually everything you’ve decided about my character,” he said. But later clarified that he ended-up enjoying the direction Johnson choose for the story. Now, in the new Times piece Hamill reasserts his idea of an investment in Luke saying “You don’t want to admit how possessive you’ve become. There are times where you go, ‘Really? That’s what they think of Luke? I’m not only in disagreement – I’m insulted.’”

Itzkoff also notes of Hamill: “he’s still not sure whether Mr. Lucas always intended for Luke and Leia to be brother and sister.” This pokes a lightsaber at one of the stranger aspects of the classic Star Wars trilogy. In the original film, a low-stakes love triangle between Han, Luke and Leia is suggested. Then, in the second installment — The Empire Strikes Back — Leia actually kisses Luke full on the mouth to make Han jealous. But, by the end of Return of the Jedi, Leia is just Luke’s secret sister and nobody in the films seem bothered by the flirting and innuendos in the previous episodes. Infamously, Leia also has memories of her “real mother” in Return of the Jedi, a fact which is proven to be somewhat impossible by the events of Revenge of the Sith, in which its clear that Leia’s mother — Padme Amidala — dies in childbirth. So, even on both ends of the George Lucas’s retcon, it seems like he never had a clear idea of Leia’s family status.

The Marvel comics published in between the release of A New Hope and Empire, and between Empire and Return of the Jedi, all focused on one aspect of the love-triangle or another. Plus, promotional still of Luke and Leia in super-romantic poses in Empire are pretty easy to track-down. Meaning, even if Lucas “always” decided Vader was Luke’s father, Leia being the secret twin sister was a super late-in-the-game decision.

Appropriately or not, The Last Jedi is similarly burdened with questions of familial relationships. But unlike Leia suddenly being revealed as Luke’ sister, the new trilogy’s heroine Rey has been frontloaded with all sorts of intentional vagaries about her lineage. In this way, the familial intrigue in the new Star Wars trilogy has been inverted. Kylo Ren was revealed to be Han Solo’s son in the first half of The Force Awakens. Has The Last Jedi learned a lesson for the unconvincing Leia “reveal” of Return of the Jedi? Because, if even the man behind Luke isn’t convinced about his own secret sister, it seems like Rey doesn’t need to be related to anyone at all.

The Last Jedi is out everywhere on December 15.