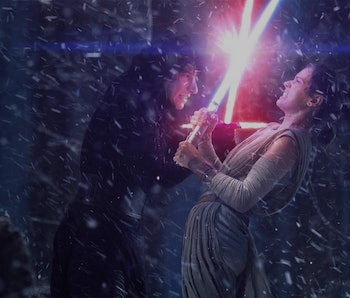 Who are Rey’s parents? It’s a question that Star Wars fans are obsessed with going into The Last Jedi, but Adam Driver, who plays the villainous Kylo Ren in the films, might have revealed more than he ought to have. Apparently, Rey is royalty.

Driver let the spoiler slip while talking about the depths Last Jedi characters have during an interview with GQ for an article that hit the web on Sunday. Kylo Ren obviously has a lot of different layers to him, since he’s really Han and Leia’s son who turned to the Dark Side.

“I remember the initial conversations about having things ‘skinned’, peeling away layers to evolve into other people, and the person Kylo’s pretending to be on the outside is not who he is,” Driver told the magazine. “He’s a vulnerable kid who doesn’t know where to put his energy, but when he puts his mask on, suddenly, he’s playing a role. JJ had that idea initially and I think Rian took it to the next level.”

The (potentially) big spoiler, though, came when the actor turned his attention to Rey.

“You have, also, the hidden identity of this princess who’s hiding who she really is so she can survive and Kylo Ren and her hiding behind these artifices,” he said.

Now, it’s possible that Driver was just using “princess” as a turn of phrase, but if Rey really is royalty, there are big implications for Star Wars. Who would her parents be, though? Leia was, famously, a princess, but if Rey is her and Han’s other child, would she be royalty? Leia’s a general now, and Alderaan, uh, doesn’t exist. Is there even a royal line anymore?

Driver’s reveal also makes it seem a little unlikely that Rey is Luke’s daughter, as many have expected. Unless we’re about to learn a ton about Luke’s as-yet unmentioned royal wife, it doesn’t seem like she be royalty with Luke as her dad. Same deal with Obi-Wan, another leading theory.

Perhaps she’s a “princess of the Force,” or some other mystical term that we haven’t heard of yet. Maybe her parents are royalty, just not characters that we had ever seen before in previous films. Or, sigh, maybe Snoke is her dad, and he’s a king or something.

We will (hopefully) find out more when The Last Jedi hits theaters on December 15.