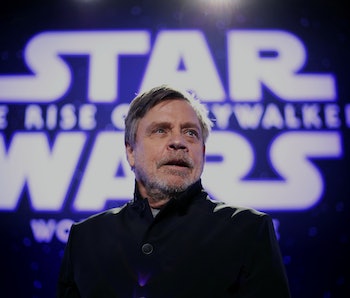 In the opening moments of The Rise of Skywalker, a green, horned alien named Boolio provides the Resistance with a crucial piece of information, which, arguably, sets the film's entire plot in motion. Secretly voiced by Mark Hamill, this Star Wars bit-player was also designed, from the earliest stages of production, to meet a grisly fate.

As Episode IX made its way to home video, Inverse caught-up with legendary creature designer — and Porg master — Neal Scanlan to get the scoop on numerous Star Wars creatures. Here's what he revealed about this small, and pivotal alien, and why everything about the behind-the-scenes design was able to push a galaxy, far, far away into new and hardcore territory.

“We knew he was going to be decapitated.”

When Poe and Finn obtain secret data about the return of Emperor Palpatine, the info comes from an alien we've never seen before. Boolio shouts, "Win the war!" and that's the last time we see him alive.

We see Boolio one more time on screen, but it's just his head being plopped onto a conference room table by a pissed-off Kylo Ren. Supplementary material tells us that Boolio's alien species is "Ovissian," but Neal Scanlan tells Inverse this alien species was designed to his head cut-off right from the start — Mark Hamill playing the role was just a bonus.

"The design of the character was because we knew he was going to be decapitated," Scanlan says. "There was something about the idea of Kylo holding the horns. That visual of that head dropping in drove our design. Cinematically, it was so much more powerful to have the knowledge of something that was being held by horns. All the blood gives it a sort of backstory."

When it comes to Hamill's involvement, that was a shock even to Scanlan.

"We had no idea Mark Hamill was going to do the voice," he says. "When we shot that particular scene for that sequence, one of our puppeteers just voiced the line. But we had no idea who would eventually do that. Sometimes, they actually use the puppeteer's voice."

“We deadened the silicon skin so it would sort of flop when it hit the desk.”

Scanlan's team may not have known Luke Skywalker would eventually become Boolio, but they did know Boolio was going to get his head sliced-off way before they designed the alien. Does this mean that Scanlan and his creature team actually decapitated a puppet? Not exactly. There were two Boolio heads to make all this work.

"The first head was part of what we call a suited performer. That was Aidan Cook in a costume that was built by Michael Kaplan," Scanlan says. "He's wearing an animatronic head. The animatronics, which create the facial expressions, are being performed by a second puppeteer who is on a live intercom. Between the two of them, they bring that character to life."

As for head number two, that was easier to film, but more complicated to design.

"The second head was much more designed as a prop," Scanlan says. "It was designed to have the weight that it should have and the deadness it should have. We deadened the silicon skin so it would sort of flop when it hit the desk. It was built very, very strong because Adam is quite a real-world actor. When he threw it down, he really threw it down. There was no acting."

Famously or not, Star Wars is a (mostly) bloodless universe. But Scanlan said it was a challenge to push the envelope slightly with the oozing head of Boolio, a feeling more evocative of horror or Indiana Jones than Star Wars.

"We built a little capsule underneath that allowed for a certain amount of fluids to leak out as well. It was a fun thing to do," Scanlan says with a laugh. "With Star Wars, you often don't get to tread that line."

Check back in the next few days for our much longer, in-depth interview with Neal Scalan, including the secrets of the Emperor, Babu Frik, and Ewoks!

Star Wars: The Rise of Skywalker is out now on Digital download and hits Blu-ray on March 31.