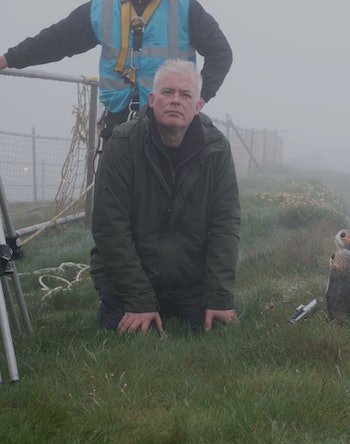 Even if you don’t love the Porgs you probably have to admit that on some level, they are really cute. But what makes us react to movie creatures like this? Why do we think the Porgs are cute? The true master of The Last Jedi — just released this weekend — is Neal Scanlan. He’s the guy whose job it is to manufacture all the creatures you see in the new Star Wars films. Scanlan began his association with that galaxy far away with The Force Awakens, but his movie creature-making skills go back much further than 2015. In fact, one reason you love the Porgs so much is probably because Scanlan has personally perfected the mind-tricks of adorable animals. In 1996, he won an Oscar for Best Visual Effects, thanks to his contributions to crafting a heroic little pig in the family film, Babe. In other words, Scanlan doesn’t just do cute creatures. He weaponizes them.

Inverse caught up with Scanlan on the opening day of The Last Jedi to chat about everything non-human in the latest Star Wars episode. And he revealed surprising facts about the casino on Canto Bight, how Luke Skywalker’s island connects to Charles Darwin, and Scanlan’s own personal theory of cuteness.

Why are the Porgs so cute? Is there a formula for cute movie creatures?

There are a million sort of references you can draw on. Children are the very beginning of it. There’s nothing more wonderful than the infancy of any species that lives in our world. From a human baby to baby animals…they are all designed to elicit an emotional reaction. Babies are gorgeous. I can’t sort of think of any exception to the rule on that. And then you look at the wonderful work that’s been done by so many different animators. They’re all in our psychology, aren’t they? The eyes being the window to the soul and those proportions.

How many creatures are physical versus augmented in the computer?

Certainly with the vulptices[Ice Foxes]; they were very much all CG. We started with a 2D design, we did a maquette, we worked things out with Rian, we scanned that maquette and that maquette was taken to CG. Which is absolutely the right way to go, the only way to go with a creature like that. Wonderful.

But, when we come to the casino, it’s almost like 95 percent practical. And just 5 percent CG. And that’s because we have so many of those casino tables to hide under. We can put puppeteers underneath those. We can put people in costumes. Obviously, there’s one CG character there who stands out. The little guy who puts the money inside of BB-8. He’s clearly CG. The onus is always to try and create something completely practical if we can. And if we can’t, then we talk to the visual effects supervisor — Ben Morris — and we work really well together. But, normally, it’s more of an assistance to be able to pull off something in the world, practically that one couldn’t do with CG.

“This isn’t reminiscent of another creature or something we feel like we’ve seen in these films before.”

How did the creatures on Luke’s island come about? Are the Caretakers aquatic?

It was very important to try and keep a DNA stream from the Porgs to the Caretakers or any of the creatures who lived on the island. Because the feeling was it was this incredibly isolated place. There was little, if any evolutionary influence coming in from anywhere else. So the idea was take a Porg, and the Porg’s DNA in a sense, but let’s make them aquatic creatures with bird-like influences. This was very much a feeling that the only creatures that would have made it are birds of flight or fish. Rian had described them as very caring and there was originally male and female versions. And perhaps we’ll see those in some deleted scenes or something. So the feeling was how could we make them feel caring and appealing, one would want to connect with. But at the same time, give them a unique twist or unique aspect that this is the only island you would see them on. In terms of isolated evolution, Luke’s island is like Charles Darwin and Galapagos.

You worked on both The Force Awakens and Rogue One prior to this. What was significantly different this time around, either with workload or aesthetic?

Rian as a director was very, very clear. He had the whole story in his head. So, when we first started to meet with Rian he could tell us the story. And he could tell us moments, in almost incredible detail. And that was great because we had a really good starting point. And I think he really pushed us very hard in areas where we had to start taking a slightly more independent step forward. We often refer back to the original films or take Ralph McQuarrie’s work or Joe Johnston’s work. But, as a filmmaker Rian was taking those first new steps to where we need to be in the future. And so, it was important for us to think along those terms. We understand the world of Star Wars, but what had to be done here was to say this isn’t reminiscent of another creature or something we feel like we’ve seen in these films before and let’s try something new and hope it will fit in that world.

The Last Jedi is out in wide release now.