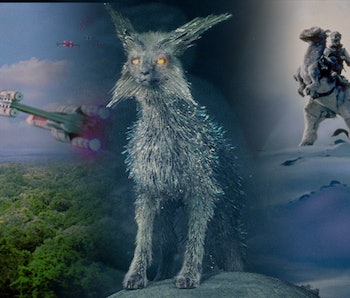 The Rebellion against the Empire had a ramshackle start as its leaders looked for a safe space from Emperor Palpatine’s forces. Much of its history remains a mystery for many Star Wars fans, but some of that history might have been filled in, inadvertently, by the Pokémon-looking crystal dogs from Star Wars: The Last Jedi.

Entertainment Weekly spoke with Neal Scanlan, head of the Star Wars creature shop, for its Star Wars: The Last Jedi cover story. Scanlan revealed some new details about the previously unnamed animals Star Wars fans have come to know as “crystal foxes.” Those details might just help establish some previously unknown facts about the Rebel Alliance of the original Star Wars trilogy.

First off, it’s important to know that the glowy-eyed crystal foxes are called vulptices; a single crystal fox is a vulptex, a word derived from the Latin “vulpes,” meaning “fox.”

“These inhabitants of the mineral-rich world of Crait run across the salt flats and burrow deep within the crevasses of this former hideout for the Rebel Alliance, which in galactic lore dates back to the events of the original trilogy,” EW revealed. In the 30 years since the Rebellion defeated the Empire, the vulptices have made the former Rebel base on Crait their home.

“They live within the burrows and within the tunnels beneath the planet,” Scanlan said. “So there is a time where their ability to shine within the darkness, should provide a guiding light to our heroes.”

Crait has never been a part of Star Wars canon before The Last Jedi, as the mineral-rich planet was conceived specifically for the film. Lucasfilm has worked overtime at weaving the planet into the Star Wars mythos, though, which has involved filling in some broad gaps in the canon, one of which has to do with Rebel bases between Star Wars: A New Hope and Star Wars: The Empire Strikes Back.

Star Wars: The Last Jedi – Storms of Crait is an upcoming graphic novel from Marvel Comics that supposedly furthers the Crait story and details Luke Skywalker and Leia Organa’s journey to Crait. According to Star Wars: Rogue One: The Ultimate Visual Guide, Leia’s adopted father Bail Organa first established a hideout on Crait before the Rebellion was a fully fledged movement. The temporary hideout was abandoned before the events of Rogue One.

In Storms of Crait, Luke and Leia travel to Crait to potentially reestablish Crait as a full-on Rebel base. If they succeeded, then that means Crait might have been the Rebel base location between Yavin 4 in A New Hope and Hoth in The Empire Strikes Back. Whether or not they actually succeed has yet to be seen or confirmed, but the EW article seems to establish that there’s still at least something for the vulptices to explore.

Star Wars: The Last Jedi and the vulptices premiere in theaters on December 15.