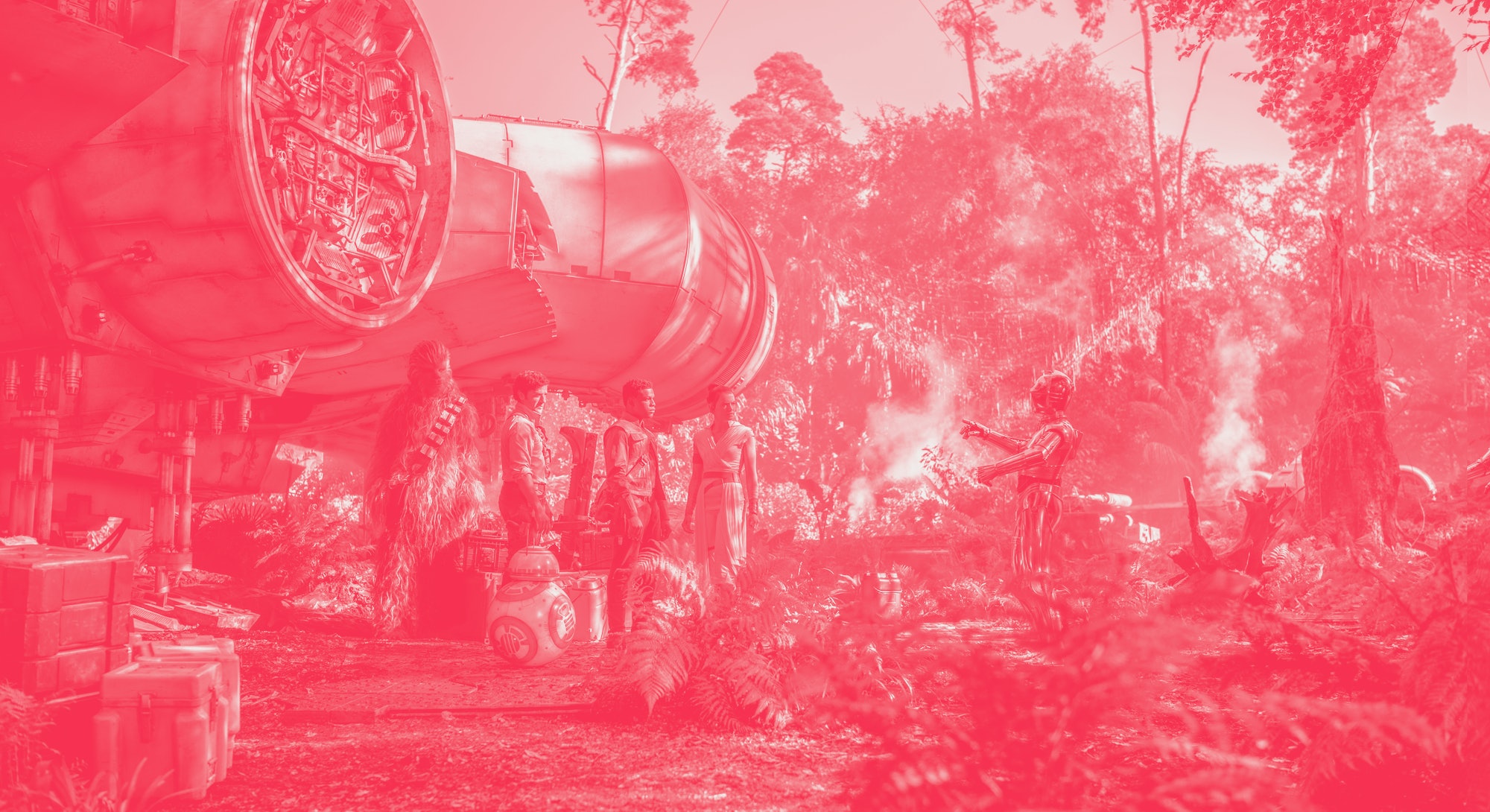 The opening words of the opening crawl of the final movie in the Skywalker saga state plainly: THE DEAD SPEAK!

In context, it’s referring to one wrinkled Sith Lord who makes a jarring return that’s never fully explained, but those words apply just as well to everything that happens in Star Wars: Episode IX — The Rise of Skywalker.

From Carrie Fisher’s complicated inclusion to the plot and structure, the “last” Star Wars movie is more concerned with the past than what the future holds. While Rise of Skywalker often feels like it would be better if it were five Disney+ episodes, that doesn’t mean it’s a bad movie. Uneven? Sure. Too long? Definitely. But there’s plenty to love, too.

Familiar characters like Emperor Palpatine (Ian McDiarmid) and Lando Calrissian (Billy Dee Williams) are a joy to see again on the big screen, and returning director J.J. Abrams recaptures the magic of the original trilogy while crafting the best lightsaber battle in franchise history (and maybe also the second-best).

At times, Star Wars: Episode IX surpasses all 10 other Star Wars movies — when it’s not bogged down in its own mythology, MacGuffins, and fan service.

The basic premise of Rise of Skywalker is far too complicated to explain, but it boils down to this: Palpatine back.

What ‘Rise’ is all about

After Emperor Palpatine announces himself with a mysterious broadcast across the galaxy, Kylo Ren (Adam Driver) seeks out the rotting Sith Lord and plans to destroy him. Instead, Palps offers Kylo a massive army in return for a simple favor: “Kill the girl! End the Jedi!” At the same time, the combined forces of the First Order and Palpatine’s Sith army — now called the “Final Order” in a subtle reminder that this is all just a fascism metaphor — set out to destroy every free planet in the galaxy, giving the good guys just 18 hours to find the Emperor and kill him, again.

This quest takes up the bulk of the story, with a reunited Rey (Daisy Ridley), Finn (John Boyega), and Poe Dameron (Oscar Isaac doing his best Harrison Ford), chasing a series of clues across the galaxy.

Putting all these familiar faces together gives The Rise of Skywalker its energy, and together, Ridley, Boyega, and Isaac are reminiscent of the charismatic trio that carried the original trilogy. (A scene where these new heroes sneak onto a Star Destroyer is quite similar to A New Hope.)

But their adventure quickly devolves into a series of video game-style fetch quests, with mixed results. The mysterious dagger that was so hyped in trailers is a MacGuffin that leads to a second MacGuffin, and probably should have been cut entirely. (Yes, it serves a dual purpose, but not one that couldn’t have been rehashed elsewhere). There’s even a boss at the end of each mission, and it’s always Kylo Ren — the mysterious Knights of Ren that fans obsessed over for years finally show up, but they’re severely underused and barely leave an impression.

The Rise of Skywalker occasionally drags, but when it flies, it moves at hyperspeed. The return to Endor has to be the most beautifully shot and choreographed scenes in any Star Wars movie. From the moment we arrive, there’s something different about this planet. It offers scenes of inspiring, natural renewal, juxtaposed with the hulking wreckage of the Death Star. When Rey and Kylo duel on Endor it’s like nothing we’ve seen before, two warriors leaping over building-sized waves. It’s like Crouching Tiger, Hidden Dragon, with lightsabers.

An earlier duel between the two is equally impressive. Abrams takes the concept of Kylo and Rey’s Force connection from The Last Jedi and stretches it out. Miles away from each other, red and blue lightsabers meet in a flurry of blows that bend the rules of space-time as scattered objects spill from one location into the other.

The director does an impressive job of fusing The Force Awakens and The Last Jedi into a single story. There’s no denying the drastic differences between those two movies (Abrams played it safe, while Johnson took risks that didn’t always pay off), but Rise of Skywalker manages to find a middle ground. It incorporates Johnson’s bolder ideas about who gets to participate in Star Wars while backtracking on some of the more disputed revelations from the 2017 movie.

“Never be afraid of who you are,” Leia tells Rey, splitting the difference between the Episodes VII and VIII. Garbled as it may be, the message in Rise of Skywalker seems clear: Anyone can be a hero, regardless of whether you’re a Skywalker or a nobody.

Abrams does an impressive job of incorporating the material he had.

Fisher’s posthumous role as Leia is admittedly touchy. Abrams does an impressive job of incorporating the material he had, but it’s impossible not to see the seams in this effort to sew her into the story. Every scene with the late, great Fisher feels shoehorned to fit whichever lines of dialogue were usable, making for stilted exchanges. The most successful moments come when the camera turns away from Fisher’s face, providing just the tiniest bit more freedom to create something from nothing.

Even if you didn’t know Fisher had already died when the movie was shot, you’d recognize something was amiss. That might be easier to overlook if Disney hadn’t broken its promises not to include a CGI Leia — like the one in Rogue One — to round out the film. The admittedly brief version of Leia Organa looks like a video game cutscene, and adds little value to the movie.

Lando and the Emperor

The Rise of Skywalker gives us two more returning faces from Star Wars history: Lando Calrissian and Emperor Palpatine. Both actors shine, and while Lando plays a limited role, he’s a pleasure from the first moment we see him. Billy Dee Williams seems to be enjoying himself more than anyone else here, and it shows.

But it’s Emperor Palpatine who truly steals the show. Ian McDiarmid has never been afraid to ham it up before, and some of his new lines will no doubt go down in Star Wars history alongside classics like “I am the Senate.” (The best are all spoilers, but Palpatine does have a great quote about Snoke.)

Billy Dee Williams seems to be enjoying himself more than anyone else here.

However, shoehorning the Emperor into the plot requires a fair amount of suspended disbelief — even for Star Wars. Anyone hoping for concrete details around the character is going to be disappointed, at least until Lucasfilm fills in the gaps with future novelizations, comics, Disney+ shows, narrative podcasts, and augmented reality experiences at Disneyland.

Mark Hamill is also back. He gets a powerful scene that expands our understanding of a Force ghost while confirming once and for all that old Luke Skywalker is the best Luke Skywalker — while other Star Wars icons get offscreen appearances. I won’t spoil one of the movie’s biggest surprises, but keep your ears open and you might just hear a few familiar voices.

New additions are used sparingly; probably a wise decision considering how much Rise of Skywalker has to do. Zorii Bliss (Keri Russell) is a fine enough character who’s more plot device than person, giving our heroes the tools and information they need while offering a canvas for the movie to sketch out Poe’s backstory. There’s a new adorable droid: Babu Frick is a pint-sized mechanic who will, no doubt, show up in your Instagram feed next week. Baby Yoda, your days as top meme may be numbered.

The strongest new entry is without question Jannah (Naomi Ackie), who plays a semi-pivotal role and might just be the future of Star Wars. She bonds quickly with Finn after revealing that she’s also a turncoat Stormtrooper, and their conversation hints that they might both have latent Force abilities, giving Last Jedi fans something to cling to in the absence of Broom Boy.

Ultimately, The Rise of Skywalker was never going to please everyone. Billed as the last movie in the Skywalker saga, there’s simply too much ground to cover and too many characters with too little spotlight. There’s enough material here for a new trilogy, but cramming it into one movie results something half-baked and a little forgettable.

In Rise of Skywalker, you’ll remember a few key moments as some of the best in Star Wars history, but as a film, Episode IX falls somewhere in the middle of the pack, at best.