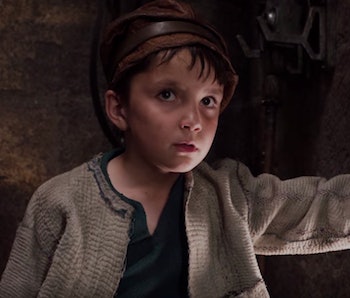 The Last Jedi is perhaps the most divisive Star Wars movie yet, as it seems that fans either love it or hate it. Perhaps the final scene has something to do with why the reactions are so strong, because it’s an unexpected, polarizing scene that introduces a new Force-user in an extremely casual manner.

This post contains spoilers for Star Wars: The Last Jedi.

When Finn and Rose find themselves on the run from the police during their ultimately unsuccessful mission on Canto Bight, they hide in the faither stables. The gambit works because Rose is able to win the trust of a couple of Oliver Twist-lookin’ slave children who work the stables by showing them her special ring proving that she’s a member of the Resistance.

Much later, during the lengthy movie’s very last scene, we see these children again. They’re recounting Luke Skywalker’s now-legendary last stand against the First Order on Crait, proving that the Resistance lives on. One kid, a young boy, leaves the stables, casually uses the Force to pull a broom into his hand, and looks up at the stars with wonder. He’s wearing Rose’s ring, which he points skyward as John Williams’s iconic theme song starts to blare.

“Broom Kid” isn’t named in the movie, but supplementary materials identify him as Temiri Blagg. We don’t know much about him, other than he’s a slave, presumably isn’t related to anybody important (like Rey), and he is Force-sensitive. Temiri’s scene, which really reads more like a post-credits scene than a formal end to the film, hammers down the movie’s themes. Luke isn’t the “last Jedi,” the Force can be found in people with humble beginnings, and the events of the movie were indeed a spark that lit a fire that’ll (hopefully) burn the First Order down.

So, do fans need to be on the lookout for Temiri Blagg in Episode IX?

It seems pretty unlikely that a random slave child with no concrete connection to the main action and no real lines over the course of the entire film would become a protagonist in the next movie. He’s a symbol, not a reoccurring character, most likely.

IMDb states that Temiri Blagg is played by first-time actor Temirlan Blaev. This is another indication that the character probably won’t come back to be a major player in future Star Wars movies. Blaev does a fine job, but does the franchise which still gets shit for Jake Lloyd want to put another untested youth at the center of a blockbuster movie?

The biggest indication that we’ll never see Temiri Blagg again is in his name. Temiri Blagg looks and sounds a lot like the actor’s real name, Temirlan Blaev. This is like when George Lucas’s daughter Amanda made a cameo in Attack of the Clones playing a character named “Adnama.”. If a character’s name is a not-so-subtle Easter egg alluding to the actor’s real name, we’re probably not going to be hearing that name a lot.

Temiri doesn’t need to come back to Star Wars to have made an impact, though. In his Last Jedi appearance, he showed that Luke is a folk hero, the Resistance lives, and the Force is strong. Above all, he was a hint that there are countless stories in the Star Wars galaxy waiting to be told. We don’t need to hear Temiri’s in order for it to matter.

The Last Jedi is now in theaters.